In recognition of its long relationship with The Disney Conservation Fund, UF’s College of Liberal Arts and Sciences presented its Partner Award to the organization in 2019. Receiving the award is Disney’s corporate social responsibility officer Kim Sams, herself a UF alumna.

Two Florida powerhouses — Disney and UF — are partnering to make sure future generations experience the magic of the natural world.

“Conservation,” Walt Disney wrote in 1950, “isn’t just the business of a few people. It’s a matter that concerns all of us. It’s a science whose principles are written in the oldest code in the world: the laws of nature.”

Protecting nature was personal to Disney. He loved the outdoors — the wild places and wild things that roamed there. Watching over it, he believed, is the right thing to do.

All these years later, the entertainment empire he created is saving endangered wildlife in jungles, forests, prairies and waters stitched across the continents. The Disney Conservation Fund — which turned 25 last spring — is working to slow, stop and eventually reverse the decline of at-risk species. Sea turtles and butterflies, two animals UF is famous for, are high on the priority list.

The environment has always been important to Disney — it was important to Walt Disney himself. We want to carry forward Walt’s legacy in conservation to protect wildlife and wild places.

“While Disney is known for magical experiences, it takes a lot more than that to bring a species back,” says Sams, a director in Disney’s corporate social responsibility office. “When people collaborate and start paddling that canoe in the same direction, that’s when you have real magic that leads to true impact that you can measure.”

Supporting conservation is nothing new for the company. The Disney Conservation Fund for years has been awarding grants for environmental and wildlife causes — close to $100 million so far has been given to hundreds of projects in 115 countries.

But in 2015 The Walt Disney Company went bigger, bolder and more strategic. That year, it began an ambitious program that focused extra attention on 10 animals. Along with annual contributions to other conservation agencies, Disney is investing millions more in a few select partners. The University of Florida is one of them.

“UF is in that very exclusive group because of the research that they’re doing,” Sams explains. “The university and the other organizations we’re collaborating with check all the boxes: commitment to measure impact, skills and talent to do the work, relationships around the world.” 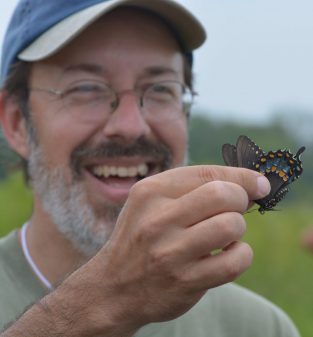 Elephants, great apes and tamarin monkeys, cranes and coral reefs, and a few others joined butterflies and sea turtles on Disney’s initial species concentration list. Its partners are a who’s who in the world of conservation — organizations like the International Crane Foundation, Perry Institute for Marine Science and Wildlife Conservation Society. UF is the only university in the group.

Teaming up with the university was a no-brainer, Sams says. She insists that when it comes to butterflies and sea turtles the expertise is obvious in UF’s McGuire Center for Lepidoptera and Biodiversity and its Archie Carr Center for Sea Turtle Research.

Alan Bolten, the Archie Carr Center’s associate director, calls the association with Disney a “shot in the arm” for UF’s sea turtle program.

“From the very beginning working with Disney, going back 15 or more years, it immediately struck us that Disney wants to do things right,” he says. “That means a lot to us. It allows us to accomplish research and conservation efforts at the highest quality.”

Wish Upon a Star

Walt Disney, the man, would drag a camera into the wilds to capture Mother Nature in her glory. A deer’s gait, an owl’s hoot, a lion’s roar — he treasured it all.

That admiration twinkles throughout his 1942 movie “Bambi.” Respect for the fawn and forest creatures is crystal clear from the opening scene to the closing credits. It’s evident again in his award-winning nature documentary series, “True-Life Adventures.” The 14 standalone films — with titles like “Seal Island,” “Prowlers of the Everglades,” “Vanishing Prairie” and “Nature’s Half Acre” — introduced children and their parents to a world of wonders in the 1950s.

“If we will use our riches wisely, if we will protect our wildlife and preserve our lakes and streams, these things will last us for generations to come,” Disney promised before his death in 1966.

His wish is reflected in some of Disney’s most popular theme park attractions (“Jungle Cruise” and “The Seas with Nemo & Friends” are two) and movies (like “The Lion King,” “Wall-E” and “Brother Bear”), and especially in Disney’s Animal Kingdom and the Disney Conservation Fund. Walt Disney Studios’ Disneynature documentary films series even brings nature’s stories directly into living rooms via cable TV and DVDs.

“The environment has always been important to Disney — it was important to Walt Disney himself. The work we’re doing through the DCF is a natural extension of that steadfast commitment,” Sams says. “We want to carry forward Walt’s legacy in conservation to protect wildlife and wild places.” 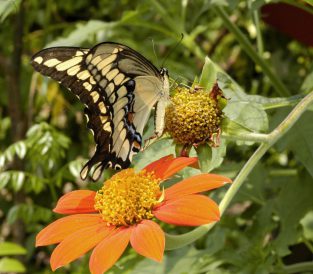 Together, UF and Disney have released nearly 1,000 Schaus’ swallowtails (pictured) and more than 10,500 Miami blues into the wild.

That’s not easy. You’d have to go back 65 million years — the end of dinosaurs — to find the last time extinctions were happening this fast and were this widespread. Tropical rainforests alone are losing 27,000 plant and animal species each year, scientists warn.

The Hawksbill sea turtle might soon be gone, too. Same thing with the Cross River gorilla — fewer than 200 are in the wild. It’s worse for the Javan rhino — just five dozen separate it from extinction. The list goes alarmingly on … and on … and on. Lions, orangutans, elephants, tigers, penguins, corals, Monarch butterflies, sharks, whales — thousands of species are teetering dangerously close to vanishing.

Disney’s work with UF and other partners might be one of the last best chances to stop an environmental catastrophe.

The Disney Conservation Fund’s new initiative took big steps in that epic task in its first five years. Three million trees were planted in Brazil’s rainforests. In The Bahamas, a 40,000-acre conservation area was set aside to protect coral reefs. A 65,000-acre savannah corridor in Kenya and a 130,000-acre wild chimpanzee habitat in the Congo were established. Projects in Indonesia, Cambodia and Sri Lanka are helping hundreds of species and providing fresh drinking water. There’s a new snow leopard conservation program in China. Penguin breeding and feeding grounds near the Antarctica Ocean have become refuges.

And at UF, the Archie Carr Center is reducing threats to sea turtles that are caused by commercial fishing, poaching, pollution, the loss of nesting beaches and warming seas. The McGuire Center is restoring habitats, and breeding and releasing captive butterflies to replenish dwindling numbers.

Without the partnership with the Disney Conservation Fund, some of those projects wouldn’t be possible, Daniels and Bolten contend.

“Conservation is slow. Things just don’t happen overnight,” Bolten says. “You have to be patient to see small steps forward. Disney understands that. Its long-term commitment allows us to strategically plan the research and conservation efforts we’re involved in.”

Even with all those strides it might not be enough, Sams worries.

“One of the concerning things is not enough people, especially children, are choosing conservation, zoology or biology as a career path,” she says. “The job that we have is certainly to work to save animals today, but it’s also working with the scientists of tomorrow. What’s really critical is that there’s someone to carry the torch.”

UF’s relationship with The Disney Company goes way back. Really, ever since the Magic Kingdom took root in Florida in the 1970s the two have been a duo — the state’s most popular attraction and its flagship university. What was good for one was usually good for both. Disney needed engineers and artists and accountants and tourism professionals, UF had them. Gators needed jobs, Disney had those. Disney wanted innovation, UF had it. The university wanted student internships, Disney provided them.

So when UF and Disney each decided on their own that it was time to do something more for the environment, they turned to each other. The Disney Conservation Fund’s investment in UF’s sea turtle and butterflies programs is just one example. Water conservation is another. And there are numerous other tag-team projects in departments across campus.

As a UF alumna herself, that kinship pleases Sams (BSJ ’79). (She was Kim Rester when a student.) 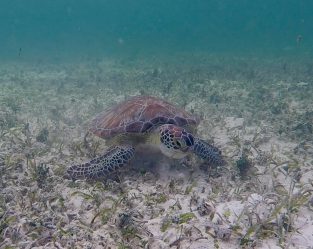 UF teams and Disney have removed more than 2 million pounds of marine debris from sea turtle habitats — such as the grasses that Florida’s green sea turtles eat — and restored or cleared 14 miles of nesting beaches.

“What makes me proud as a Gator and fourth-generation Floridian is the fact that Disney has settled here and has made a positive impact in the environmental space in so many ways,” she says. “Because of The Walt Disney Company more than $5 million has been contributed to the University of Florida to focus on wildlife conservation efforts where they are urgently needed.”

Her own ties to UF have nothing to do with its partnership with Disney, she’s quick to point out.

“Although I’m really proud to be a Gator and proud of these projects, I have to remain objective,” Sams says. “The entire Disney review committee makes the final decisions, and what makes me most proud is I can say without question that it’s the quality of the research and the dedication of the students and faculty at UF that makes their proposals worthy of getting support, regardless of who’s on the review committee.”

The university’s commitment to the environment and seriousness to science to solve conservation problems gives her reason to be optimistic, Sams insists.

“I’ve asked myself what’s really important about these programs,” she explains. “It’s great that we’re saving sea turtles and increasing butterfly populations. But to me what’s most important is that UF is engaging thousands of people in conservation, whether through debris removal and beach cleanup or growing milkweed or butterfly releases or helping scientists with sea turtle research.

“You just can’t put a price on the impact those experiences make on a person’s future plans. It could be career, it could be how they live their daily lives — whether they recycle or get plastic bags at the grocery store — but the key to conservation is individual action,” Sams says. “And it’s great that the University of Florida has programs and leaders in conservation who are taking this forward.” 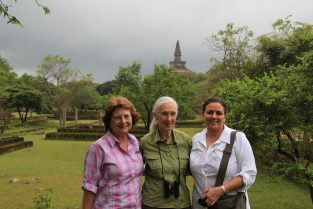 Famed primatologist Jane Goodall, pictured with Kim Sams (left) and Jane Goodall Institute vice president Susana Name (right), is one of the many global leaders in conservation who Sams has worked with during her 30-year career with The Walt Disney Company.

When Kim Sams was little she’d sit with her father, and instead of reading bedtime stories they’d flip through John James Audubon’s book “The Birds of America.” He’d occasionally point to a picture and ask his daughter to name the bird. “Wild turkey,” she’d answer with glee, “mockingbird,” “blue jay” or whatever the bird might be.

“It brings tears to my eyes when I think about it,” Sams (BSJ ’79) says now. “If it wasn’t for my dad, who sat me down with that big Audubon book of birds, I might not care so much about wildlife.”

Turning children into conservationists might be as simple as that, she says: exploring nature, hand-in-hand.

“Each of us can take the responsibility of sharing something wonderful with a child we know,” Sams believes. “As parents and grandparents and aunts and uncles, brothers and sisters, take our children outside. That’s where it starts.”

The woods, a park, UF’s Florida Museum of Natural History, the backyard — anything will do.