For the Veterinary College, An Infusion to Shape Critical Care

A $1 million professorship honors an emeritus faculty member — and provides perpetual support for those who will teach emergency medicine at UF’s Small Animal Hospital.

A retired South Florida veterinarian and his wife have made a $1 million gift to the University of Florida College of Veterinary Medicine to establish an endowed professorship honoring an emeritus faculty member for his contributions to the college and the veterinary profession.

Dr. Larry Dee and his wife, Rita Dee, have created the Michael Schaer Professorship in Small Animal Emergency and Critical Care Medicine, which will provide perpetual support for a clinical faculty member who will be associated with the department of small animal clinical sciences and will work with the emergency and critical care service at UF’s Small Animal Hospital.

Dr. Schaer has influenced so many veterinary students, alumni and other veterinary professionals over the years, and this gift is such a meaningful way to honor him.

“Dr. Schaer has influenced so many veterinary students, alumni and other veterinary professionals over the years, and this gift is such a meaningful way to honor him,” Zimmel said. “We are deeply appreciative of the Dee family’s generosity and their ongoing support of the college.”

Larry Dee comes from a family with a huge legacy in veterinary medicine in Florida. His late father, Dr. Clarence Dee, served on the state’s Board of Veterinary Medicine for more than 20 years, and helped support efforts to build the state’s only veterinary college in the 1970s.

“I have a picture of him and others standing behind the governor as he signed the bill creating the college,” Dee said.

Clarence Dee and his father-in-law founded the highly successful Hollywood Animal Hospital in Hollywood, Florida, where Larry Dee and two of his brothers, who also became veterinarians, worked for many years; one brother continues to practice there. All the Dee brothers attended veterinary school at Auburn University, as UF’s veterinary school did not exist at the time.

An active member of the Florida Veterinary Medical Association, Clarence Dee also helped establish the Charlie Bild VIP program at the UF veterinary college — an initiative named after an influential Florida veterinarian and through which practitioners could spend time at UF, gaining knowledge to take back to their private practices. The program remained active intermittently at UF for nearly 35 years.

Larry Dee was the first Charlie Bild VIP at the college in 1982. He recalled how helpful Schaer, who was on the UF faculty at the time, had been to him. Dee first met Schaer in the late 1970s, when Schaer worked for the Animal Medical Center in New York City as an internal medicine and emergency medicine clinician. Schaer had accompanied his then-boss on a trip to the Hollywood/Fort Lauderdale area to give a seminar to Larry’s local veterinary association. 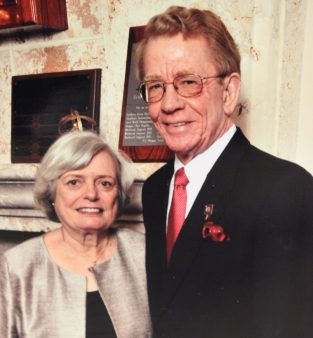 “It was one of my first continuing education lectures,” Schaer recalled. Dee subsequently helped Schaer procure speaking engagements at large professional meetings, including those of the American Animal Hospital Association and the FVMA.

“When I joined the faculty at UF in 1978, Larry and I rekindled our friendship, for it was important to me to foster good relations between FVMA and the college,” Schaer said.

He added that the two were “from the same vintage” and shared philosophies about the importance of quality continuing education for practicing veterinarians.

“We easily maintained a friendship,” Schaer said. “I got to know the Dee family well and the bond grew.”

Board-certified in both small animal medicine and emergency medicine and critical care, Schaer retired from the college in 2012 after 34 years of teaching and mentoring veterinary students, interns and residents. Since then, he has continued to work part time, caring for patients through the UF Small Animal Hospital’s emergency and critical care service. He also has fulfilled interim administrative roles at the college.

Thousands of UF veterinary alumni remember Schaer’s proscribed rules for practicing veterinary medicine, known as “Uncle Mikey’s Maxims.” Schaer’s maxims are the result of accumulated experiences that have had a huge impact on him in clinical situations, he said. He started out with 10, but his list has grown to more than three dozen. In addition, Schaer is the author of two seminal textbooks, “Clinical Medicine of the Dog and Cat” and “Clinical Signs in Small Animal Medicine.”

Schaer said he was completely surprised and very moved to learn the Dees had created the professorship in his name.

“Larry is a quintessential professional, an excellent practitioner and a workhorse for the FVMA and the American Veterinary Medical Association,” Schaer said. “He’s a great thinker and a wonderful guy who helped spur the growth of the veterinary profession over the past 40 years. There are very few people who have had all of those qualities.”