The Doctor and the Docent

Libby Furlow spent each Thursday morning volunteering in UF’s butterfly rainforest. It was one of the many things she did at the museum to enhance visitors’ experiences during her almost 50 years there.

Theirs is a love story that unfolded over seven decades. In 1947 — the year Leonard Furlow and Elizabeth Truitt’s lives touched — he was a teenager from St. Louis and she was a tall, slender 13-year-old with a charming Southern accent. She was his sister’s friend, and he called her “Libby.”

She lived in Madison, GA., a pretty country town 60 miles east of Atlanta. It has about 100 antebellum homes, and there are oaks and dogwoods and azaleas, red brick storefronts, and cemeteries dating back to long before the Civil War. (Libby’s house had been built in the 1830s.)

When she was growing up there during World War II, the population was about the same as it is today: fewer than 4,000 men, women and children. But, as fate would have it, her neighbors included most of the Furlow family tree. And when young Leonard made trips there to see relatives he’d make a point to visit her, too.

At Libby’s death, I was overwhelmed at receiving at least 75 long, beautiful notes about her from people who worked in the museum. She taught me a lifetime’s worth about a loving relationship and she taught me how one leaves this life bravely and gracefully.

Their 9-year, long-distance courtship ended in marriage on June 16, 1956. The week after his graduation from Washington University Medical School in St. Louis — and one year after hers from Wesleyan College in Macon — the doctor and woman he adored became mister and missus.

“She was by far the best, most cherished thing that ever happened to me,” Leonard (HS ’66) says. “I cannot imagine a better marriage than we had.”

Over the next 10 years his training as a surgeon took the couple to Charlottesville, Japan, Chapel Hill and Gainesville, where they finally settled. He spent six years on UF’s medical school faculty before conducting a solo private practice in Gainesville for 17 more years.

It was 1972 when Libby became one of the Florida Museum of Natural History’s first volunteers. She soon became a member of its board, and served one year as secretary and two more as president. When her maximum-allowed five years as a board member ended, she was asked to remain. In 2009, the museum named her as its volunteer of the year. The city of Gainesville also recognized her that year during its annual Work of Hearts Award ceremony. She and one other docent became the museum’s first emeritus members, which was her board status until her death in 2018. 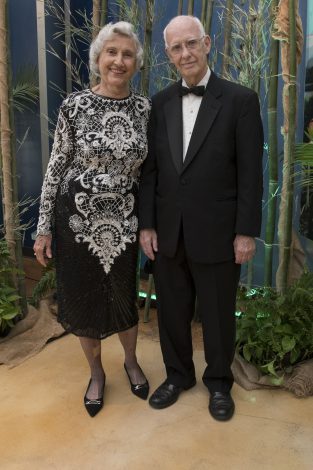 Dr. Leonard Furlow and Libby Furlow were strong UF advocates throughout their time together in Gainesville. This spring, Dr. Furlow named a museum classroom in Libby’s memory. (Photo by Jeff Gage/Florida Museum)

As their years in Gainesville passed, Libby’s involvement at the museum had grown. She was a docent for visiting schoolchildren, a naturalist, horticulture assistant, butterfly rainforest interpreter, plant salesman, and even a decorator for events. Whatever was needed, she did. And she always encouraged everyone to visit the museum.

“In 2004 after the butterfly rainforest was added to the museum, each Thursday morning before the museum opened, she resuscitated cold butterflies, cleaned up dead butterflies, picked up leaves and tidied up,” Leonard says.

That she was so admired didn’t surprise him.

“After I retired from practice I had the opportunity to go on some 55 volunteer overseas surgery trips,” he explains. “Libby went on about 40 of the trips. She always found something useful to do: setting up and helping in clinics, keeping records and charts, circulating in the operating room, running the sterilizer, working in the recovery room, consoling parents, taking care of children. On our trip to Kenya she even worked in an ophthalmology shop making eyeglasses.”

But the museum was never far from her heart, Leonard says. She especially enjoyed the educational trips with the museum’s experts. He accompanied her to places like Ecuador and the Galapagos Islands, Mexico for the annual Monarch butterfly migration, the Panama Canal and on multiple trips nearer home.

Sixty-two and 1/2 years after they married, leukemia took Libby from him the week before Christmas 2018.

“We shared each other’s experiences, friends, time and lives,” Leonard says. “We each immeasurably enriched the life of the other. Every moment of our marriage, even in the midst of an argument, I was happy that we were together, and every moment that we were apart I missed her.”

It’s in her memory that this spring Leonard, now completely retired, made a generous gift to the Florida Museum of Natural History — where Libby had been a volunteer for almost 50 years. The high-tech classroom that will bear her name is part of the museum’s new Thompson Earth Systems Institute.

A former schoolteacher, Libby Furlow enjoyed serving as a docent for children at the Florida Museum of Natural History.

The room will be a fitting tribute, he believes. His wife had loved the museum, was for several earlier years a schoolteacher and as a docent taught in the museum. Their daughter, Elizabeth, had followed her mother into the museum profession.

“At Libby’s death, I was overwhelmed at receiving at least 75 long, beautiful notes about her from people who worked in the museum,” Leonard says. “She taught me a lifetime’s worth about a loving relationship and she taught me how one leaves this life bravely and gracefully.”

Philanthropy was a priority during their time together. The couple supported a number of UF programs over the years. In the College of Medicine, for instance, the Furlows established a professorship to honor Maurice “Josh” Jurkiewicz, Leonard’s chief and mentor at the university.

Their latest gift to the university, however, might be the most special — at least to Leonard.

And not just because it’s a memorial to the woman he’s loved for so long.

The classroom named for Libby Furlow will enhance the experiences of children and other wonder-seekers for generations … and, just maybe, give them the sense of joy that Libby had whenever she walked through the Florida Museum of Natural History’s doors.