They arrived in Gainesville with a desire to get involved — and a growing collection of art. A natural connection point? The Harn, where the couple is sponsoring the exhibit ‘Shadow to Substance.’

For Dr. R. James and Sara Toussaint, of Gainesville, making the world a better place starts with deliberate actions that lift up individuals and communities — and ripple outward to change hearts and minds.

James is an NYU- and Harvard-educated orthopedic surgeon who treated victims of the 2013 Boston Marathon bombings and the 2010 earthquake in Haiti. Sara is a seasoned sports marketing executive who works tirelessly to break barriers for girls in sports and STEM as a board member of the nonprofit Play Like a Girl.

Together, they recently became co-owners of the North Carolina Courage, a top professional women’s soccer team. But the couple scored an equally as impressive goal this past fall when “Shadow to Substance,” the groundbreaking Black photography show they sponsored at the Harn Museum of Art, made national news and was hailed by Forbes as one of the country’s best college art exhibitions.

“We get just as excited at a Harn exhibition as we do at a Gators football or basketball game.”

Gators season tickets holders as well as members of the Harn’s National Council, the Toussaints say there is no competition between their dual passions.

“We get just as excited at a Harn exhibition as we do at a Gators football or basketball game,” said Sara in a recent interview.

And they hope that people from all walks of life embrace the variety of the Harn’s offerings, especially given that admission is free.

“The Harn is for all of us,” said James. “One of the duties we [UF supporters] have is to make sure that the education goes beyond the university to the local community, to east Gainesville and northern Florida and beyond.

“With ‘Shadow to Substance,’ we wanted something that would bring people in and start a dialogue.” 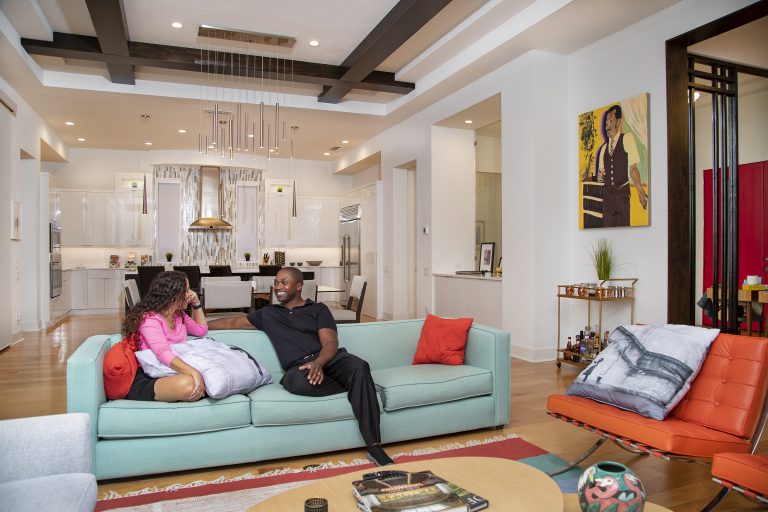 Sara and James Toussaint relax in the living room of their contemporary Gainesville home, which James helped design.

The couple met as undergraduates at the University of Chicago in 1997, when Sara and James were both 18. It was the first day of class, and she picked him for an ice-breaker activity.

“I’m extroverted, and he’s much more introverted, so at first I thought he wasn’t friendly,” laughed Sara.

“I would say we were mutually curious,” James remembered, smiling.

Among the personal details they shared were their diverse backgrounds. The daughter of a Puerto Rican mother and a Palestinian father, Sara was raised in Chicago’s historically Mexican enclave of La Villita. James was born in Haiti and raised in Fort Lauderdale.

Their ice-breaker encounter blossomed into a long-lasting relationship; the couple have now been together 24 years, 15 of those as a married couple.

Post-graduation, James spent four years as an investment banker and went on to train as an orthopedic surgeon, with time spent in New York and Boston. In 2014 he joined The Orthopaedic Institute, in Gainesville, where he serves as the in-house foot and ankle specialist.

Sara’s professional career has centered mainly on sports, starting with a two-year stint in labor relations for Major League Baseball. Today, she serves as vice president of sports marketing at Wells Fargo, where she works with Major League Soccer, the Mexican national soccer team and other sports organizations. 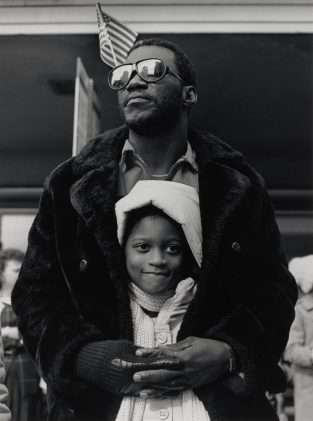 “The Guardian” (1990), by Earlie Hudnall, gelatin silver print. Hudnall’s photographs focus on children and elderly, showing the continuity between generations. Image from “Shadow to Substance” exhibition, Harn Museum of Art.

In 2014, the Toussaints moved from Boston to Gainesville to be closer to James’ parents in Palm Bay. Despite not being UF alumni, James and Sara smoothly adjusted to life in the small university town, with access to Gator athletics being a big draw, they say.

“My subspecialty in orthopedics is lower-extremity surgery, and there was quite a need for that in this community, so I was welcomed with open arms,” said James. “Plus, Sara and I were on an HGTV show called ‘House Hunters.’”

The episode, “Couple Disagrees on Midcentury vs. Victorian in Gainesville” (season 106, episode 4), aired in October 2015 and served as an ideal introduction to the community, they say.

“Many people in town knew us after that,” said Sara. (In case you’re wondering, the couple went with James’s choice, the midcentury, but a few years later, decided to build a new contemporary that James helped design.)

Among the treasures the Toussaints brought to Gainesville from Boston was their growing art collection. They had started off buying art from street artists during their frequent travels, and that hobby evolved into serious collecting.

For James, collecting art has been a way to express his personal artistic bent, which was put on the back burner in childhood.

“For Haitian immigrant parents, there are basically two career choices for their kids: doctor or lawyer,” he said. “Growing up, Sara took studio art class, but that wasn’t something I was ever encouraged to do — even though I loved that stuff. So, the way I eventually nurtured that interest was to do art history as a subset of my college education, and then I went into collecting.”

While the Toussaints receive collecting advice from experts, first and foremost, they must personally connect with a work before acquiring it, they say.

“A piece just has to speak to us,” James said. “It has to have some color or vibrancy or a good memory.” 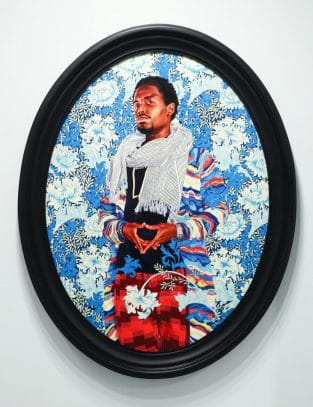 Kehinde Wiley, “Margaret, Countess of Blessington” (2018), Harn Museum, on loan from Dr. James and Sara Toussaint. Referencing the works of Old Masters, this color-rich painting of a young Black man was Wiley’s first work after completing his official portrait of President Barack Obama.

In 2018, Sara and James acquired Wiley’s “Margaret, Countess of Blessington,” the artist’s first completed work after the Obama portrait. The Toussaints’ new home was still under construction, so, with no space for the masterpiece, Sara and James — then complete unknowns to the Harn — contacted the museum to inquire if they could loan the painting for temporary display.

Initially, Harn staff were in disbelief, but once James proved that, yes, this was indeed the latest Wiley and, yes, it belonged to him and Sara, the museum was overjoyed at the offer, he said.

The Harn facilitated the transfer of the painting from a New York gallery to Gainesville in March 2018 and proudly mounted it alongside other works from its Contemporary Collection. That initiated the Toussaints’ ongoing support of the museum.

When the couple heard the Harn was developing a photography exhibition inspired by activist Sojourner Truth to illustrate the lives of Black people in the U.S., they were “all in” as sponsors, the Toussaints said.

“We didn’t hesitate at all,” said James. “This is a great way to generate conversations and educate the young and art lovers and future artists.” 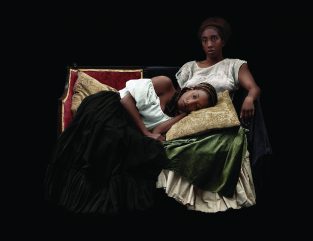 Ayana V. Jackson, “Moments of Sweet Reprieve” (2016), from the series “Intimate Justice in the Stolen Moment.” Jackson uses herself as a model in this series, which reimagines free and enslaved Black women in 19th-century Europe and the Americas. Image from “Shadow to Substance” exhibition, Harn Museum of Art.

“I think it’s cool that someone like James is sponsoring ‘Shadow to Substance,’” Sara said. “There’s a lot of power and strength in having someone who is Black be able to promote and financially support an exhibition like this.”

People who want to make a difference should take whatever opportunities they can to support Florida’s flagship university, says James, no matter the size of the gift or how “niche” the donor’s personal interests.

“Universities like UF offer a great place for people to make an impact in whatever areas they care about,” said James. “There is so much openness to new ideas. If somebody has a special interest, there will be somebody at the university who will help them find a connection point to support it — whether it’s sponsoring an exhibit or growing a book collection or having more popular culture items in the library…. You can even go in with a group of friends to support an event.”

“No gift is too small,” James added. “What’s important is to participate— and help move the conversation along.”

Visit the Harn to see “Shadow to Substance,” on view through February 27, 2022. Featuring 74 photographs, “Shadow to Substance” creates a chronological arc of Black life using archival images from the Harn and Smathers Library collections and works by Black photographers working today. Alternatingly poignant, painful and profoundly uplifting, “Shadow to Substance” asks viewers to meditate on the connections between Jim Crow Florida, the Great Migration, the Civil Rights movement and Black Lives Matter.

Interested in supporting the Harn? Learn here about ways to make a difference through membership, individual and corporate gifts, and more.