Renowned for his compassion, good humor and storytelling, the late insurance agent Fred Diamond (BSBA ’52) played quarterback for the Florida Gators during the pivotal “Golden Era” after World War II. Now a legacy gift in his name to UF Athletics ensures his love of football and sports history lives on after him.

“Dad made lifelong friendships at UF, on the football team and in his fraternity,” said daughter Karin Jawitz (BSBA’ 82) in a recent interview. “Giving back to the university just made sense.”

“He was a walking Florida sports historian who could share the best stories from the past,” added daughter Lisa Faris. “He seemed to know everyone wherever he went.”

“He really loved his alma mater and felt it very important to be a part of it, in any way he could,” said Dr. Andrea Diamond, his eldest child. 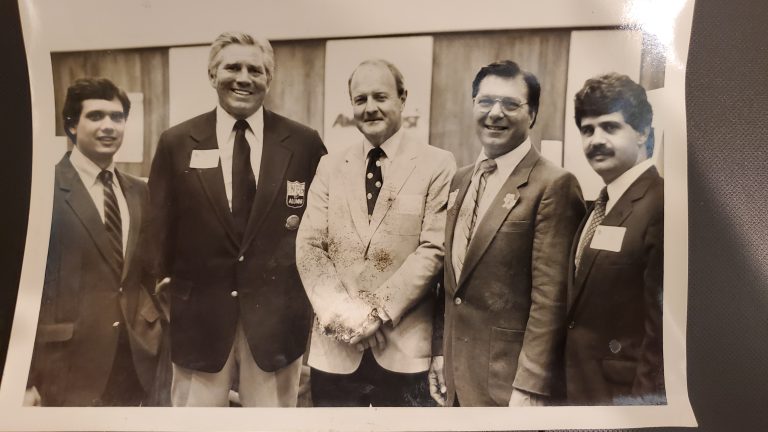 Funds raised by the Golden Era Gang supported scholarships and building repairs at UF. This photograph, likely taken on campus in the 1980s, shows UF President Marshall Criser Jr., center, flanked by NFL lineman Frank Dempsey, on the left, and Golden Era Czar Fred Diamond, on the right. Next to Diamond is attorney and UF alum Danny Ponce. The man on the left is unknown.

Born in Miami Beach in 1930, Diamond witnessed the seaside town’s transformation during the second world war.

“I went to Miami Beach elementary and junior high schools, and watched the soldiers marching down the streets when the entire island … became a military base,” he wrote for HistoryMiami Museum. “All of the parks and golf courses became drill fields, the north end of the beach – where the Bal Harbour Shops now stands – became a prisoner-of-war camp, and on the ocean side there was a firing range.”

Diamond was a star athlete at Miami Beach Senior High, where he lettered in football, basketball, baseball and track, graduating in 1948. That year, he followed the example of many of his friends and enrolled at the University of Florida, as a business major. 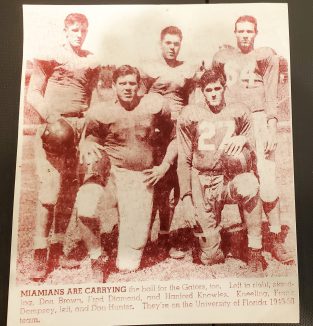 “How did we get there?” he wrote. “It was a Greyhound bus, for about $7, or you could take the Seaboard Railway from Miami to Waldo, Fla., and hitchhike into Gainesville. So many of us chose UF because the tuition was only $75 per semester for a Florida high school graduate, and a dorm room was just $50 per semester.”

Diamond’s sports prowess found many outlets at UF, where he played football from 1948 to 1950, proudly becoming known as the only left-handed Jewish quarterback in Gator history. He also lettered in track and was a member of Zeta Beta Tau and Delta Sigma Pi fraternities, but it was his ties to his gridiron teammates, the “Golden Era Gang,” that proved a lifelong calling.

The group’s name came from the Gators’ unparalleled 0-13 losing streak in 1945-46, which inspired players from 1945 to 1952 to ironically dub their time at UF the Golden Era. These close-knit Gators — who included Florida attorney general James Kynes (BSBA ’50, JD ’55), NFL linebacker Frank Dempsey (BSPE ’50) and College Football Hall of Fame coach Marcelino Huerta Jr. (BSHSE ’49) — held reunions for decades, raising money for scholarships and facilities repairs at UF. Among the Golden Era Gang’s most involved members was Diamond, who served his whole life as the group’s “Czar.”

Sue Diamond, Fred’s high school sweetheart and his wife of 67 years, recalls decades of traveling from Miami to Central Florida for the group’s get-togethers. 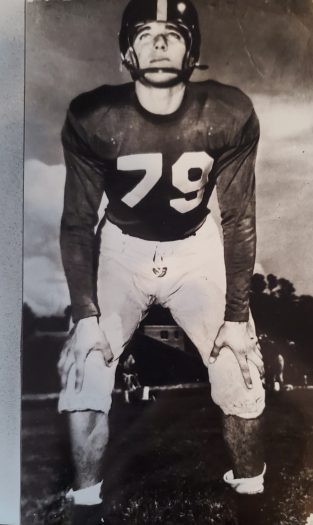 “For years, they held their reunions in Homosassa, and then we moved up to Crystal River,” she said in a recent interview. “That group did so much good for UF.”

Forged after the war effort, which had thinned the ranks of UF athletes, the Golden Era Gators united men of disparate backgrounds. In Diamond’s case, his being Jewish was a rarity among Gator football players in 1948, and Frank Dempsey, who attended Miami Senior High, made it his personal business to see that no one harassed the Miami Beach newcomer.

“Frank told Fred, ‘You put your locker next to me, and I’ll look out for you,’” remembered Sue.

Dempsey’s strategy worked: No one dared pick a fight with No. 79, the new quarterback, and Diamond became an integral member of the team, led by Coach Ray “Bear” Wolf. That solidarity was echoed on Florida Field the following year when another newcomer, super-fan George Edmondson Jr., aka Mr. Two Bits, began rallying the crowd with his iconic cheer, “All for the Gators, stand up and holler!”

After earning a bachelor’s degree in business administration in 1952, Diamond returned to Miami where he opened Diamond Insurance and became owner of Trophy World.

Fred never missed a UM football game, but his loyalties were put to the test whenever Florida played Miami. On those occasions, Sue had the last word on her husband’s Game Day attire.

“I told him, ‘The only color you can wear is orange,’” she joked.

As he planned his legacy, Fred wanted to remember his alma mater and made a bequest in honor of those long-ago days on Florida Field.

Now the spirit of fellowship and generosity that defined the Golden Era Gang will live on at UF Athletics — proving that, in Fred’s case, a Diamond is forever. 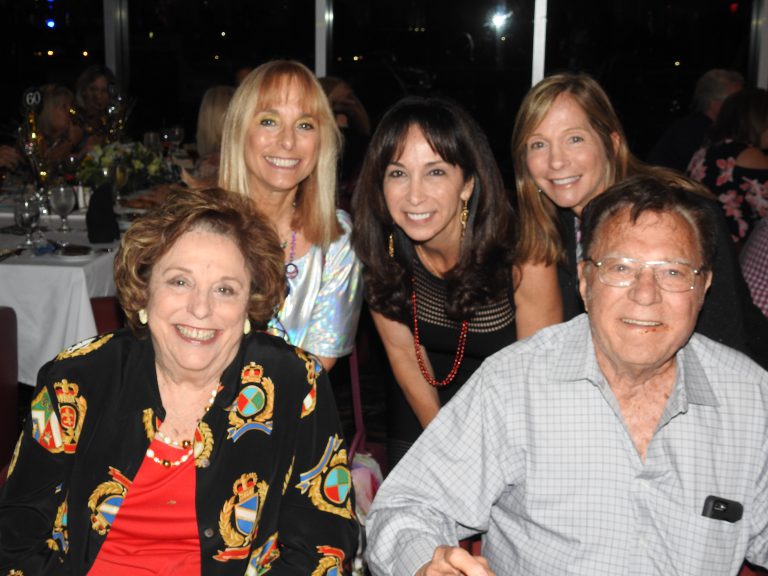 The Diamond family: Bottom row, Sue and Fred Diamond; top row, left to right, daughters Andrea Diamond, Karin Jawitz and Lisa Faris. The photo was taken in May 2017 at the birthday of Fred’s son-in-law, Lane Jawitz, a ’79 Gator alum.