Born with a rare lung disease, Izabella Neira (age 6) wasn’t expected to live past her first birthday. Expert care from the “angels” at the UF Health Congenital Heart Center helped her beat the odds and thrive as a normal child. “When I grow up, I want to be a princess and a scientist,” she says.

Laughing with delight as she wriggles down a playground slide, rosy-cheeked Izabella Neira looks like any other first-grader letting off steam after a day of school.

But 6-year-old Izabella is anything but ordinary. Inside her tiny chest, a new heart and lungs keep her alive — organs she received more than five years ago as one of the youngest patients in the United States to undergo a heart-lung transplant.

“She had to be resuscitated at least once a day, every day, until her transplant,” says her mother, Krystina Lopez Neira, remembering the first 417 days of her daughter’s life when Izabella lay sedated in a hospital crib, connected to a ventilator and fed through a tube.

When Bella came to us, she was really the most critically ill child that you can imagine. Some days it was a minute-to-minute, hour-to-hour battle to keep her alive.

“The team who kept her alive — they’re angels.”

“When Bella came to us, she was really the most critically ill child that you can imagine,” remembers Dr. Bleiweis. “Some days it was a minute-to-minute, hour-to-hour battle to keep her alive.”

To this day, Krystina has nightmares about the bells and alarms going off. “I still feel the times that weren’t so great,” she admits tearfully. “But in the end, we made it. She made it.”

Now, more than five years after her miraculous recovery, the curly-haired girl with pink glasses and an irrepressible grin is bringing a message of hope as a new “National Champion” for Children’s Miracle Network Hospitals.

“To see her running around today, you would never know that she had been in such a critical condition,” says Dr. Bleiweis. “That’s the reason I went into medicine — not to think coldly about procedures and anatomy, but to make an impact on people’s lives.

“Izabella shows what we can do for children and their families.”

Izabella’s battle for survival began Dec. 7, 2011, in Pembroke Pines, where she and her fraternal twin sister, Jesubelle (Jessi), were born three months premature. Weighing barely 3 pounds each, the twins weren’t expected to live, but Jessi soon rallied and joined her family at home.

Izabella, however, suffered a pulmonary hemorrhage and was placed on life support.

At four months, Izabella was diagnosed with a lung disorder so rare it has no name. “Surfactant deficiency caused by an ABCA3 mutation” is an inherited disease that prevents the lungs from inflating properly. With no drugs available to treat or cure the disease, Izabella would probably die before her first birthday, doctors told Krystina and her husband, Jesus Neira. The infant’s only hope for survival was a lung transplant.

The Neira family was quickly running out of time when their plight came to the attention of the specialists at UF Health Shands Children’s Hospital.

“Somehow UF Health heard about Izabella,” says Krystina. “They were like, ‘We have this hospital here in Florida. We’re going to give your daughter the chance she deserves.’”

Without even seeing Izabella, Dr. Bleiweis outlined his strategy: His team would perform a double heart-lung transplant to preserve the tandem functions of these two vital organs. The challenge would be keeping her alive until they found donor organs for an infant.

In May 2012, a UF Health ShandsCair flight team transported Izabella to Gainesville via a specialized emergency-care helicopter, with her family following behind.

For the next nine months, Izabella lay immobilized in the UF Health Shands Pediatric Intensive Care Unit, awaiting a donor. An oscillating ventilator shook her lungs to prevent fluid build-up. A feeding tube channeled liquid nutrients to her egg-sized stomach. To prevent her arms and legs from jostling the wires, Izabella was kept heavily sedated, her life unmarked by the developmental milestones achieved by most babies: learning to grasp, roll over, sit up, stand, and walk. 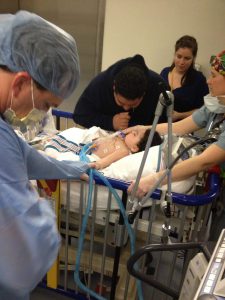 Tiny Izabella before her transplant, watched over by her father, mother, and UF Health pediatric ICU team members

Her family, who slept next to Izabella’s bed for the first three weeks and in temporary housing thereafter, could not even hold the infant for fear of endangering her more. They watched helplessly as the tiny baby suffered daily Code Blues — emergencies requiring immediate resuscitation.

“We really didn’t know if she would be able to survive until transplantation,” admits Dr. Bleiweis. “But I knew our team could manage her, and we did.”

During those emotion-filled months, the Neiras bonded closely with the pediatric team, who became Izabella’s second family.

One night, with Jessi and older sister Mia nearby in a playpen, Krystina looked on in horror as Izabella had to be resuscitated nine times in a row. While the young mother had gotten used to seeing her daughter “die” on a daily basis, the back-to-back episodes strained her emotional limits.

“I knew I was going to break down,” Krystina says.

Fortunately, an observant nurse noticed Mom needed some alone time and offered to play with Jessi and Mia outside. That gave Krystina a few precious minutes to, as she recalls, “cry hysterically.” Then she could wipe off her tears, welcome her daughters inside, and continue on “like it hadn’t even happened.”

“I still keep in touch with that nurse,” adds Krystina. “I’m just so thankful that in my worst moments, somebody was there to reach out and help me.”

The Girl with Two Birthdays

On Jan. 26, 2013, exactly 416 days after Izabella was born, her family got the long-awaited call: a compatible donor had been found.

The delicate operation took place the next day with Dr. Bleiweis performing the heart and lung transplants. Aiding them was a dedicated cardiothoracic transplant and ICU team whose expertise straddles both heart and lungs, a hallmark of care at the Congenital Heart Center.

That day Izabella became the youngest patient at UF Health to receive a heart-lung transplant and one of the youngest in the country to do so. Her parents refer to it as her “re-birth.”

Over the next few days, doctors marveled at the increasing vitality and alertness of a little girl who had spent 14 months on her back, heavily sedated, her brain receiving little sensory input.

“We weren’t even sure she was going to wake up,” remembers Dr. Bleiweis. “Her recovery was miraculous.”

Five days after the transplant, Krystina and Jesus were finally able to hold Izabella in their arms, a simple act that most parents take for granted.

“It feels so good,” her mother posted on the Facebook page where she chronicled Izabella’s daily journey. “She’s calm, I’m calm; she can breathe easy now. She’s no longer like a fish out of water — suffocating or struggling for air.”

On March 20, 2013, 15-month-old Izabella went home for the first time. But the pint-sized warrior’s battles were not yet over.

First she had to tame her own immune system. Like all transplant patients, Izabella’s body views her new organs as foreign objects and wants to reject them. The only solution is a lifetime of immunosuppressive drugs, which can leave the body vulnerable to infection and life-threatening viruses.

That’s where the expertise of Izabella’s doctors came in. Balancing her body’s conflicting needs — not to reject the organs and to defend against infection — doctors fine-tuned the precise dosages that would keep Izabella healthy. Their care helped her beat the daunting odds faced by pediatric double-transplant patients: fewer than half survive the first year. 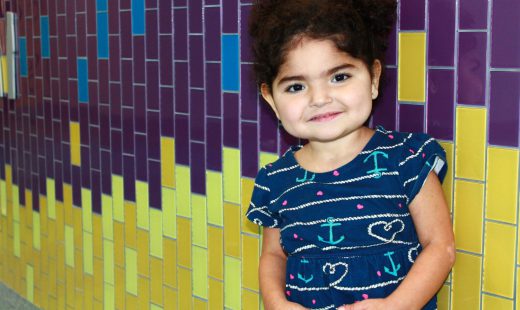 On top of that, Izabella had to waken to the world and catch up developmentally. With the help of UF Health physical and occupational therapists. Izabella learned to eat, drink, stand and walk. Regular appointments with speech therapists enabled her to speak — Izabella said her first full sentence at 3 ½ years (“Ow, Mama, hurt shoe feet”) — and special glasses corrected the legal blindness caused by the oscillations of the ventilator she’d been on for 14 months.

Her biggest supporter in all her trials was her mom: “I never thought negatively about her situation,” says Krystina. “I just expected the best, and she’s not let me down so far.”

Izabella’s journey to wellness wasn’t a straight path. Three years after transplant, at age 4, Izabella’s body aggressively rejected her lungs, and she had to be readmitted to the pediatric ICU. But with UF Health’s care, she was soon back with her family.

Fast forward to May 12, 2017, when Krystina proudly posted Izabella’s beaming face on Facebook with this caption: “When you tell your kid she’s got zero rejection for the first time in a year and a half!”

On Jan. 27, 2019, Izabella will celebrate the sixth anniversary of her transplant — or her “transplant-versary,” as mom Krystina calls it. That landmark will cap off a year and a half of exciting events for the Neira family.

In May 2017, Izabella became a big sister to baby Alynna, and this past summer, the Neiras moved to a new house in Gainesville. Jessi and Izabella entered first grade in August — together, like any normal set of twins. Settling into life near UF just felt right to the Neiras. 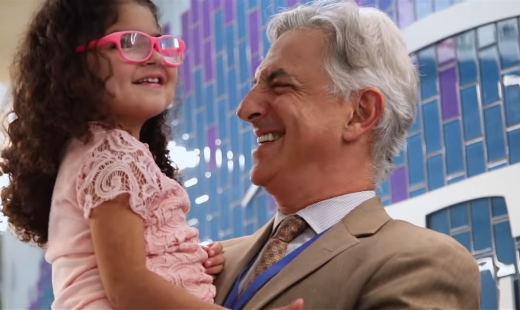 Izabella still sees her UF Health doctors regularly, and her smiling face is a familiar sight in the corridors of the Children’s Hospital. Whenever she sees her “hero,” she runs up and wraps her arms around Dr. Bleiweis’ neck.

“I just get the biggest kick out of her,” says Dr. Bleiweis. “She recognizes me all the time, and she hugs me. It’s just such a great feeling.”

Krystina adds: “Isabella knows that Dr. Bleiweis saved her life. She doesn’t call it transplant. She just knows that she has a new heart and lungs, and the reason is because of Dr. Bleiweis.”

Izabella’s miraculous recovery hasn’t gone unnoticed. This fall, Children’s Miracle Network Hospitals named Izabella a National Champion, an honor that will see her making appearances across the United States throughout the year and at the upcoming Dance Marathon at the University of Florida, in March 2019.

Somehow UF Health heard about Izabella. They were like, ‘We have this hospital here in Florida. We’re going to give your daughter the chance she deserves.’

Mom Krystina is still pinching herself about the news. “To be named a National Champion — it’s amazing.”

Izabella is the perfect fit for a CMN Hospitals spokesperson, says Jason Myers, director of content management for the national organization.

“We chose Izabella because her story directly shows the impact that donations can make to a local Children’s Miracle Network Hospital,” explains Myers. “Izabella — along with her bubbly personality — will spend the next year showing how just one dollar can make a difference for kids like her.”

Cheering her on when she takes center stage will be Dr. Bleiweis, of course.

“Izabella is a symbol of what we do as an organization, what UF Health can do,” he says. “Those cases that most centers wouldn’t handle — we take them on. We have the confidence and skills and the team, so that kids and adults get the best care possible.”

All of this, he says, wouldn’t be possible without the generosity of donors.

“There are almost no challenges that we can’t handle together,” he says.