Healing Victims’ Grief — And Her Own

A cold case expert, propelled by personal tragedy, finds an unlikely second act in creating “a world of whimsy.”

When Ashley Wellman (MA ’08, PHD ’11) was 15, she was so set on becoming an FBI agent, she kept a folder crammed with info on how to ace the agency’s rigorous vetting procedures.

“It included the physical fitness requirements and background check details so I would be prepared to soar through the FBI application process one day,” said Wellman, a recent UF 40 Gators Under 40 honoree.

Wellman didn’t end up joining the FBI, but her teenage determination paved the way for a unique career in criminal justice. After earning a master’s degree and a doctorate in criminology from UF, as well as a graduate certification in forensic death investigation, the triple Gator became a sought-after specialist in cold cases, grief and trauma, sexual assault and homicide.

“I partially lived out my early dream by working alongside detectives and special agents in a cold case department and through my research as a criminologist and victimologist,” said Wellman, who has frequently served as a subject-matter expert for the media and law enforcement agencies, from the Royal Mounted Canadian Police to, yes, the FBI.

I empower survivors to rediscover their confidence and help them regain a sense of strength and safety.

Now a resident of Fort Worth, Wellman teaches criminal justice at Texas Christian University and advocates for the survivors of unsolved homicides and sexual assault. While she has published many peer-reviewed papers and book chapters, her work transcends theory to encompass helping individuals navigate a path to healing.

“I empower survivors to rediscover their confidence and help them regain a sense of strength and safety,” she said.

For most of Wellman’s career, grief and trauma were academic areas of expertise. Three years ago, they became personal.

In August 2018, her husband, William “Buddy” Wellman, whom she met in Gainesville while he was working for the UF Athletic Association, died suddenly of a pulmonary embolism, leaving her the sole parent of their daughter, Reagan. He was 44, Wellman was 34, and Reagan, 4. 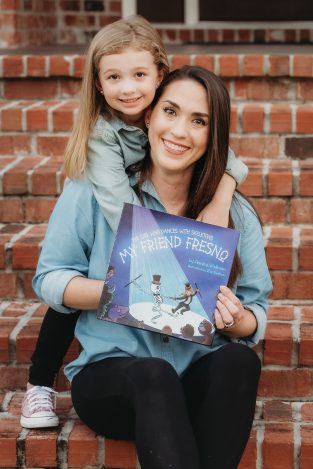 While Wellman is the author of “The Girl Who Dances with Skeletons,” her first book, she says her daughter Reagan deserves credit as a collaborator. “At the young age of 6, she has been through more trauma than imaginable and yet, she is the most sincere, compassionate, resilient and passionate human I’ve met. She even uses her own story of loss to help other children who have experienced the death of a loved one at a young age. She is my Wonder Woman!” Credit: Cherished Moments by Candy McLendon

That tragedy spurred Wellman to share her message of surviving grief, loss and trauma by appearing on more than 100 podcasts and at public events. She is currently a cohost on a new true crime podcast, The Path Went Chilly.

Wellman’s interest in helping victims began more than 10 years ago when she was a doctoral student at UF, consulting for the Alachua County Sheriff’s cold case unit. There she met the distraught mother of a cold case victim, who desperately wanted to share her concerns with someone who would really listen.

Even though there were no new leads in the unsolved case, Wellman sat down with the woman to let her know her daughter had not been forgotten.

“Just an ounce of humanity is all this mom needed to have some grief progress in her life,” Wellman told the Fort Worth Business Press last year. “We talked for about four hours. Then, I went home that night to research everything I could about the families affected by cold case murders.”

That encounter convinced Wellman to shift her academic focus to victimology, which is the study of crime victims and their families. A flurry of academic papers and book chapters followed, with topics as diverse as social media coverage of teen sexual assault, #MeToo in Hollywood, sheriffs’ perspectives of police militarization and the marketing of ISIS radicalization.

This research accompanied Wellman’s evolving academic career, first as an assistant professor at The Citadel and then as associate professor at the University of Central Missouri, to her current position at TCU.

Becoming a widow in her 30s also prompted Wellman to embark on a new path as an entrepreneur and children’s book author, including a forthcoming teen novel, “Ghosts of the Abbey,” cowritten with criminologist Patrick Kinkade, her colleague at TCU, who is the brother of artist Thomas Kinkade.

“It was Patrick who told me to start writing creatively and who gave me the permission I needed to pursue a life beyond the academy,” said Wellman.

Two years ago, Wellman created her own retail business, Rea of Sunshine, along with her first children’s book, “The Girl who Dances with Skeletons: My Friend Fresno.” It centers on her daughter’s adventures with a toy skeleton and is illustrated by Zac Kinkade, Thomas Kinkade’s nephew, who is a landscape artist in his own right. 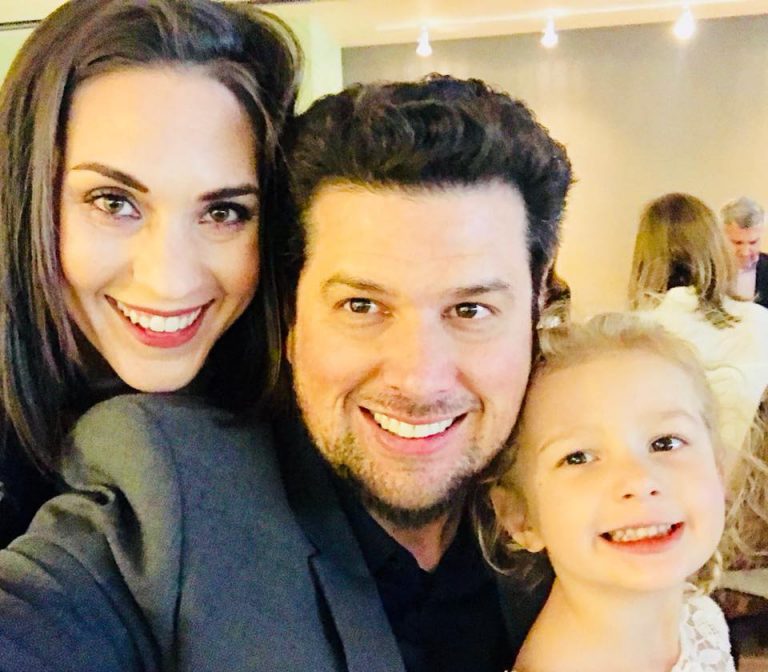 Ashley Wellman met her late husband, Buddy Wellman, while she was earning her doctorate in criminology at UF; he was working for the UF Athletic Association. Their daughter, Reagan, was born in 2014. The family had just moved to Fort Worth, Texas, in August 2018, when Buddy suddenly died of a pulmonary embolism. “His love for and faith in me inspired me to dream bigger, to fight for what I need and want in life, and to believe in myself,” Ashley says of Buddy.

“Publishing that book was a labor of love that allowed me to turn the page and begin a new chapter in the story of my life,” said Wellman.

Wellman’s life story will soon gain another chapter in Eureka Springs, Arkansas, where she is preparing to open a children’s gift and book store called aMUSEd Fine Art & Extraordinary Books. 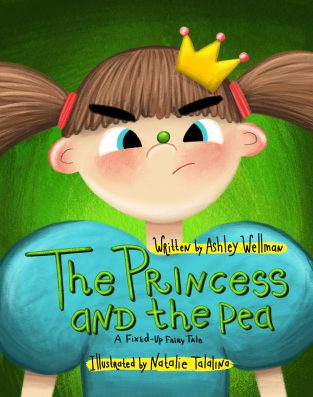 Wellman’s retelling of “The Princess and the Pea” is the first in a book series she calls Fixed-Up Fairy Tales. Photo courtesy Ashley Wellman

“It’s a place where you can step into a world of whimsy, celebrating brilliant artists and children’s literature,” Wellman said of her new storefront.

aMUSEd’s shelves will also stock the forthcoming “Fresno’s First Christmas” and her version of “The Princess and the Pea,” the first book in her Fixed-Up Fairy Tale series.

Fixed-Up Fairy Tales is an apt moniker for her new creative endeavor. Like the characters in Grimm’s fairy tales, Wellman and her clients have been through horrors — and emerged from the dark woods stronger and wiser.

“After my husband passed away, Reagan became my driving light,” said Wellman. “I had promised her daddy I would create a magical life for her. I didn’t know how I would do that without him, but for the last two years, her happiness and health have become my focus, allowing me to heal and thrive alongside her.

“Now our mission is to spread kindness and love.”

Learn more about Wellman’s journey on this podcast episode: Trauma Study to Trauma Experience: Becoming a Widow in Your 30s with Criminologist Dr. Ashley Wellman

What do you think sets you apart as a leader?
Despite my advanced degrees and career success, I never lose sight of the critical importance of being vulnerable, relatable and transparent. From my students and peers to survivors and practitioners in the field, my greatest strength is the ability to recognize the value in every individual I work with.

I always approach survivors and law enforcement agents with a simple message: You are the expert. You are the one who has survived your trauma or who delivers programming to survivors. I am simply here to collaborate, to provide a platform and a partnership that can assist in gathering the greatest level of resources and awareness. 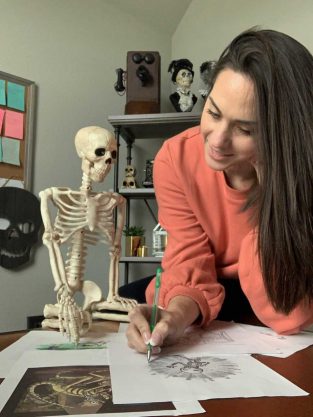 Wellman was encouraged by fellow criminologist Patrick Kinkade, brother of the artist Thomas Kinkade, to work through her grief by creating art. That advice sparked a series of children’s books and toys, an online site with resources to help children accept the uniqueness in others, and a soon-to-be opened storefront in Eureka Springs, Arkansas. Photo courtesy Ashley Wellman
What is one piece of great advice you received?
Take risks and grant yourself grace.
How did attending UF change your life?
Beyond my education, UF is where I met my late husband, Buddy, which set into motion a host of blessings, the greatest of which is our daughter, Reagan. His love and faith in me inspired me to dream bigger, to fight for what I need and want in life, and to believe in myself.
Favorite professor at UF?
Dr. Marian Borg [associate professor, sociology] modeled for me how to balance a brilliant academic career with a fulfilling family and personal life. After I completed her course, she became my mentor in all things and is now one of my closest friends.
Do you have any skills or talents that most people wouldn’t know about?
I have a first-degree black belt in taekwondo.
If a movie was made about you, what would the title be and which actor would play you?
“Metamorphosis,” starring Meghan Markle.
One book that made a difference in your life?
“The Lion, The Witch, and the Wardrobe” inspired my imagination and caused me to always peek inside the closet ... just in case. 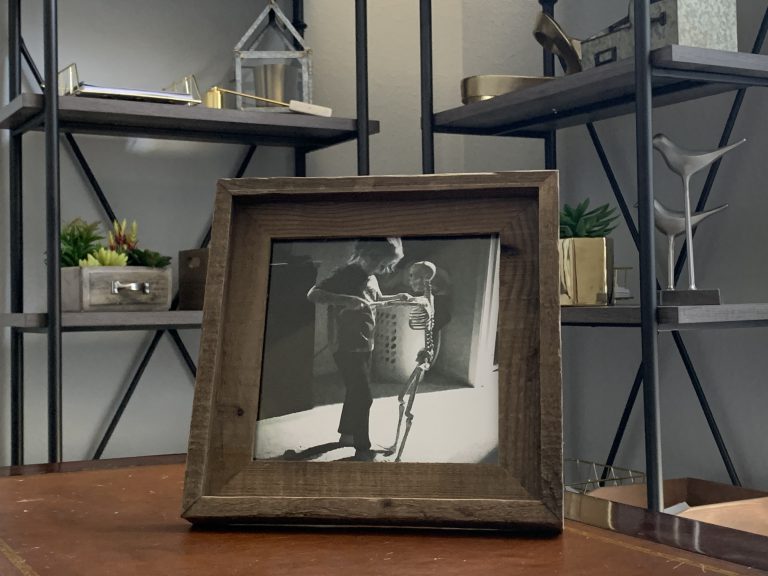 A desktop photo and a colleague’s encouragement promoted the writing of “The Girl Who Dances with Skeletons: My Friend Fresno.” Her daughter, Reagan, who witnessed her father’s death at home, has taught her much about bouncing back after grief, Wellman says.