He Left His Heart in Gainesville

Wally Rhines, one of the nation’s most respected businessmen and engineers, still finds time to generously contribute to UF’s engineering college as both an adviser and donor.

Fifty years ago, a sense of adventure drew Wally Rhines away from UF. But his love for the university and his hometown remained strong throughout his incredible life and career.

A degree from the University of Florida was a long time in the making for Wally Rhines. In 2016 — almost 60 years after first setting foot on campus — the businessman-engineer-inventor finally got that diploma: an honorary doctorate of technology.

But even while all the springs until then were tumbling past and life was taking him farther and farther from Gainesville, Rhines never stopped being one of the university’s truest Gators.

“The University of Florida has always felt like home to me,” he said when he at last received that elusive UF degree. “I grew up on this campus; this is where my education truly began.” 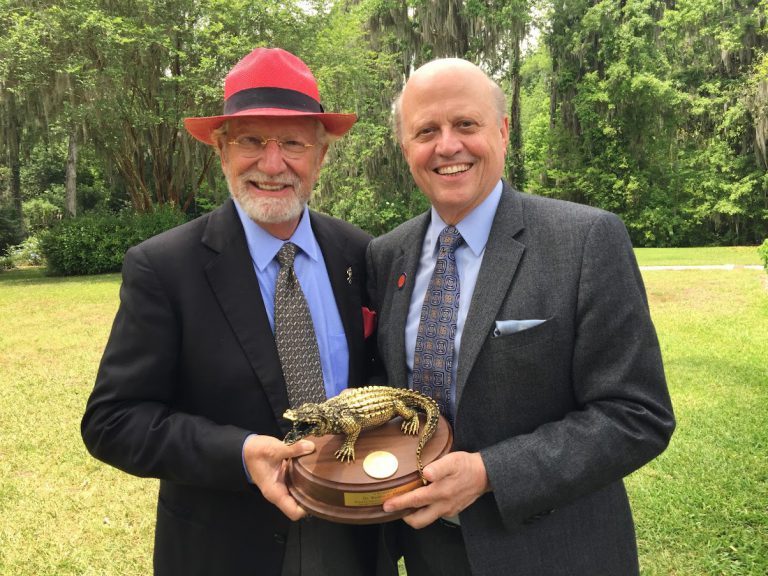 Wally Rhines (right) and Herbie Wertheim, namesake of UF’s engineering college, share a determination to transform the college to, as its slogan says, “Power the New Engineer.” The pair are pictured here in 2016 after Rhines received a UF honorary doctorate.

Rhines was in junior high in the late 1950s when his father, Frederick, became a UF engineering professor. Campus became his backyard. When time came to pick a college, however, the siren song of independence and adventure called to him — the young scholar, with a collection of schools wanting him, went to the University of Michigan to study engineering, then to Stanford for a masters and doctorate, later to Southern Methodist for an MBA.

From the get-go, he was a star. At Stanford, Rhines co-invented a blue light-emitting diode that ended up serving as a building block for another scientist’s Nobel Prize in Physics. After college, he climbed the ranks at Texas Instruments, all the way to executive vice president. Despite opportunities at TI, Rhines became CEO of the electronic design automation giant Mentor Graphics in 1993. This winter, the Global Semiconductor Alliance will salute his leadership and commitment to the field with its highest honor, the Dr. Morris Chang Exemplary Leadership Award.

Through it all, UF was never far from his thoughts. In 2007, Rhines and his wife, Paula, established the Frederick N. Rhines Professorship in the engineering college in his father’s memory. A decade later, they created the Rhines Rising Star Fund to support faculty in the Department of Materials Science and Engineering. One of America’s iconic leaders in artificial intelligence, Rhines also volunteers on the college’s advisory committees. 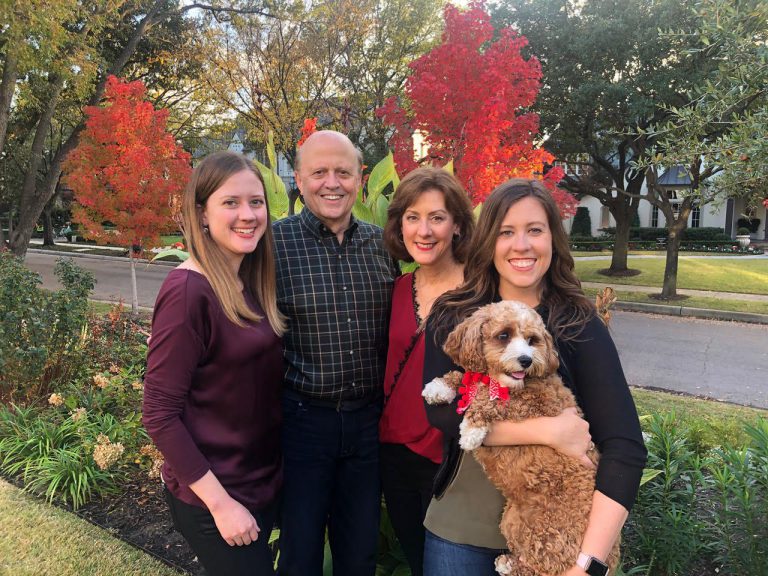 Despite living in Dallas now, Wally Rhines (pictured with his wife, Paula, and daughters, Allison and Janet) is very much a Gator. Gainesville and UF are never far from his thoughts.

We caught up with him this summer.

Q. You have degrees from Michigan, Stanford and SMU and live in Dallas, but you’re incredibly generous to UF as an adviser and in your financial support. Why is that important to you?

A. I grew up with the University of Florida — it was a very happy and rewarding period of my life. We moved to Gainesville in 1958 as my father took on a big challenge to create a materials science and engineering capability at UF; this became the place he realized his dreams.

For me, it was a new and rewarding life. It was academically challenging. UF provided the infrastructure and resources for projects and learning in junior high school and high school. Some of my closest lifetime friends were in Gainesville. Even now, I get together with four to six of my fellow classmates from Gainesville High School by Zoom calls once a month.

Q. As a UF engineering professor and founder of the Department of Materials Science, your father, Frederick, was instrumental in the engineering college’s growth and rise in prestige. Now you’re a successful engineer/businessman. How did your father influence you?

A. He set the model for academic achievement, working with others to do things that made a difference, always looking for ways to improve. He was demanding but encouraging. My success came from identifying talented people and providing an environment where they could do their best. He did the same as he built a world-class department with a remarkable team of innovative faculty.

Q. To honor your father you created a UF professorship in his name. What are the qualities you’d like to see in the professors who hold that position?

A. Professors who are innovators, leaders, inspirational to their students and other faculty, energetic and able to communicate a sense of enthusiasm for what the team can do together. Kevin Jones [who holds the professorship] has been a perfect model. He has all these qualities and more: he is a fundraiser for major research grants to the department, a recruiter of top students, a researcher, a leader and an innovator. Whenever he teaches the materials part of the undergraduate engineering survey course, applications for enrollment in the Department of MS&E soar.

Q. Your ties to UF are strong. Not only was your father a professor, your sister, stepmother and brother-in-law are all alumni. Did you ever consider attending UF after high school?

A. Although a majority of my friends from GHS did attend UF, I was focused on the opportunity to move away from home and live independently. My family traveled with me to universities all over the country and I was free to choose. That said, I took courses at UF both in high school and during summers in Gainesville while I was in college. I even did some work with professor John Wren when I was working on my Ph.D. thesis at Stanford.

Q. In 2016 you received an honorary doctor of technology degree from UF. Given your connection to UF through your family and philanthropy, what does that honor mean to you personally?

A. It’s a wonderful honor and it came as a complete surprise. Having been close to UF for most of my life, it was emotionally moving to finally become a “graduate.”

Q. What are your early memories of Gainesville and UF, and how do those memories compare with what the university is today?

A. Less than 30,000 people lived in Gainesville when I moved there in 1958. During the summer, it was a deserted town. UF’s national reputation came more from football than from academics, but things were changing, partly driven by the emerging space program at Cape Canaveral — a reaction to the 1958 Russian success with Sputnik.

The only thing that was the same on the UF campus then as today was the difficulty finding a parking place. UF’s academic reputation has soared since the 1960s. It has become a world-class university. The campus has grown immensely and the breadth of programs has expanded. As an engineering school, it has become a “go-to” destination for companies to recruit students.

Q. You’re a successful businessman and engineer, and as a philanthropist you’ve given gifts to a number of colleges. As a businessman, what’s the ROI on your charitable investments in education? Why are you such a strong advocate?

A. My wife and I have been engaged in a variety of charities and community service organizations most of our lives. My greatest interest has been in discovering people with great potential who might never have the opportunity to achieve greatness. So we’ve focused on education, the great enabler. We’ve endowed four professorships because having a named endowed chair attracts top professors to a university. We’ve also endowed several scholarships and fellowships but, unlike most such grants, ours are without regard to financial need because we want to recognize the very best students.

Q. You’re an inventor with a connection to a Nobel Prize in Physics. You’ve received some of your field’s most prestigious honors. You’re a highly respected business leader — in fact, your semiconductor startup, Cornami, just received $50 million in funding to bring its cloud-computing technology to market. UF and other organizations seek your advice. As you reflect on your life and career, what makes you most proud?

A. I’m most proud of having worked with so many outstanding people and passed on what I learned from them to help those who worked for me.

Q. Looking back at your life so far, what surprises you?

A. I never expected to be able to fund so much through philanthropy. And I take great joy in the surprise of seeing the accomplishments of people I knew long before they became successful.

Q. Once all is said and done, what do you want your legacy to be?

A. My legacy will be the people I’ve worked with, or mentored, who come up with the next great achievement and who pass their wisdom on to those who follow, in addition to the legacy of my family who made my career possible.

Q. What are your words of wisdom for the next generation of engineers?

A. “Engineer” comes from the word “ingenuity,” referring to creative engineers like Leonardo da Vinci. You’ve been trained to be the world’s problem solvers, and I hope the mysteries you unravel make the world a better place and bring you as much joy as I have experienced.