A Time for Gator Greatness

All Hands on Deck for Naval Mask‑Making Mission

Capt. Kim Toone, whose name was added to the UF College of Medicine's Wall of Fame in 2017, is leading an effort to protect sailors in the U.S. Navy's Atlantic fleet using instructions from UF Health to mass produce medical masks.

When sailors on the aircraft carrier Harry S. Truman and on other warships started running out of facemasks this spring to protect themselves from COVID-19 outbreaks, the U.S. Navy turned to the University of Florida for guidance.

“I’m excited about this process as it highlights the connection between my medical school family and my Navy family at a time when it is so important for all of us to work together,” Toone said in a U.S. Navy press release.

All the way up the chain of command it was a very positive response. This idea shows the adaptability of our naval force. The sailors were very excited about being able to take part in the response to COVID-19.

While there’s no word on how many of the masks the fleet has made so far, Toone believes enough can be produced from materials already on ships to supply the USS Truman, stationed in the Mediterranean Sea, and her sister carriers — the Dwight D. Eisenhower, George Washington, George H.W. Bush, Abraham Lincoln, John C. Stennis and Gerald R. Ford — until the mask shortage ends. That’s no small task given that ships can be at sea for months at a time and thousands of masks are needed.

To meet the demand, sailors who are trained to repair parachutes and maintain rescue-survival equipment on the USS Stennis, for instance, are manufacturing dozens of the masks each day, using medical-grade fabric that wraps surgical equipment in the ship’s operating room. The fabric blocks aerosols and droplets, including water, bacteria and other particles. 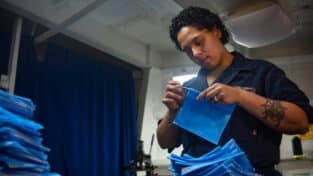 “We have to be somewhat self-sufficient,” Toone told Virginia news station WTKR. “While it’s difficult to get face coverings (stateside), it’s even more difficult (at sea) because there is a lag in getting the supplies out to them.”

Toone heard about the DIY masks from her husband and fellow Gator Michael Toone (BSAE ’94, MSRS ’96), who’d spotted a story about them on social media. When the U.S. Navy announced in early April a new requirement for sailors to wear face coverings, Toone convinced her colleagues to give UF’s masks a try.

“All the way up the chain of command it was a very positive response,” she told Gainesville’s WCJB news, describing the mask-making project. “This idea shows the adaptability of our naval force. The sailors were very excited about being able to take part in the response to COVID-19.”

A couple weeks later, the mask mission was afloat.

“As a physician, it’s difficult not to do direct patient care,” Toone said. “However, in assisting the sailors in production of these masks, it makes it so that I can help our sailors stay safe while they conduct their duties.”