Growing Gators in the Tropics

With more than 30,000 members, the Association of Hispanic Alumni (AHA) is the largest UF alumni group, representing Hispanic/Latino Gators all over the world. AHA recently announced it would fund more MFOS scholars from South Florida, a long-term goal of the association. Here, AHA members celebrate with Albert and Alberta in 2007.

Thanks to UF’s Association of Hispanic Alumni, ¡Sí, Podemos! (Yes, We Can!)

Gators are taking over South Florida. And that’s a good thing.

Thanks to a generous endowment from a passionate group of UF alumni, more exceptional first-generation college students will be able to attend Florida’s flagship university. That means more outstanding UF grads will soon be making Gator tracks throughout Miami Beach, South Miami, Fort Lauderdale, Hollywood and other South Florida communities.

The good news was announced in February 2020 when UF’s Association of Hispanic Alumni (AHA) established a permanent endowment to support students who qualify for the Machen Florida Opportunity Scholars (MFOS) program. The new endowment is specifically for future MFOS students from Miami-Dade and Broward counties.

The MFOS scholarship was the greatest blessing that I could have received. When I came to UF, I realized, ‘This isn’t just an education. This is a culture. This is me having the ability to transform my future family’s lives.’

While the MFOS program has supported more than 1,800 scholars from the two counties since its start in 2006, the new AHA-MFOS endowment will empower MFOS to sponsor even more students from the region. Studies show that the comprehensive MFOS support system, which uplifts students financially, personally and professionally, dramatically improves recipients’ lives, starting immediately after graduation, says Leslie Pendleton (PHD ’16), senior director of the MFOS Program.

“Our scholars come from families that earn an average of $19,000 a year, as compared with $105,000 a year for other UF students,” Pendleton says. “Data from graduation surveys reveals the average starting salary of MFOS graduates is nearly $43,000.”

As they continue on their personal and professional journeys, MFOS alumni have a ripple effect on family, friends and their communities, supporters say.

“After they graduate, many of the MFOS scholars go back to the communities that they came from,” says Tony Medina, Jr. (BSAC ’95), AHA president from 2013 to 2015 and a fierce MFOS advocate. “It’s like planting a seed. We hear stories again and again from past scholars, ‘Oh, my younger cousin is now in college,’ or ‘My younger sister is now applying to Florida.’ Before, they might have gone to work in their parents’ restaurant after they graduated high school. Going to college wasn’t really on their radar at all.”

“Our scholars go back and become mentors and leaders,” adds Medina, a certified CPA and founder of Medina & Martinez, in Miami. “They change the paradigm.”

The new AHA-MFOS endowment is the culmination of years of successful fundraising by the UF Association of Hispanic Alumni, which represents more than 30,000 Hispanic/Latino alumni in cities throughout the United States. It is one of UF’s largest alumni groups. 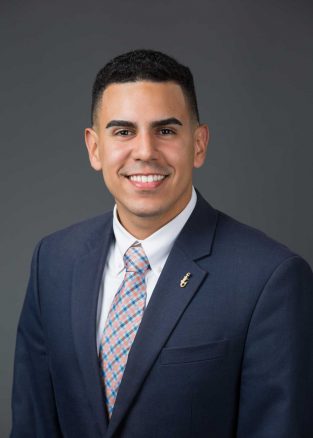 Mario Agosto was an MFOS scholar and now serves as a director of the Association of Hispanic Alumni. The son of an electrical lineman, Agosto credits UF and the MFOS program with creating a better life for himself and his family.

Originally founded as the UF Hispanic Alumni Association in 1990, the association changed to its current name in 1994. Nearly a decade later, Ignacio Abella (BSBA ’69, MBA ’70) took over as AHA president, a post he held from 2003 to 2011. A certified CPA, Abella recognized the importance of supporting first-generation college students and was an early champion of the MFOS Program, 40% of whose scholars come from Latino or Hispanic households.

Under Abella’s leadership, the AHA held its first annual gala, the Gator Guayabera Guateque (GGG), in 2004. This vibrant event brings hundreds of UF alumni to Miami each May to celebrate their diverse heritage, to honor outstanding alumni and to raise funds – $370,000, to date – for student scholarships, as well as for UF’s Institute of Hispanic-Latino Cultures (La Casita).

“The name [Gator Guayabera Guateque] is hard for many of us to say,” laughs Medina. “We usually call it GGG.” (A guayabera is a lightweight, four-pocketed men’s shirt popular in the tropics, usually worn untucked; guateque is another way to say fiesta in Spanish.)

Another term frequently heard in AHA circles is caimán, which is Spanish for gator. The association frequently uses the plural caimánes in its messages to members and the general public – @UFCaimanes is the group’s Twitter handle – and each year, a top AHA alumnus receives the Gran Caimán, or Bull Gator, Award.

When Medina became AHA president in 2013, he used the GGG as a platform to promote awareness of the MFOS Program and the need for AHA to provide scholarships for first-generation students. As donors chipped in, excitement grew around the idea of nurturing future Gator alumni in South Florida. In 2019, current AHA President Katrina Cordova (BSPR ’06) and AHA Treasurer Robert Lemus (BSBA ’18), himself an MFOS alumnus, worked to create a special endowment fund for the AHA-MFOS, which was officially launched in February 2020.

Today, anyone who wants to foster future Gator alumni in South Florida can give directly to the AHA-MFOS fund online. The MFOS Program chooses the recipients and disperses the funds.

Like the statewide MFOS Program, the new endowment helps educate low-income students of all races and ethnicities.

“That is another reason we got behind the program,” says Medina. “It supports everyone.”

To date, the MFOS program has funded the educations of more than 4,750 students, with about 1,520 of those being Latinos/Hispanics. The annual crop of Opportunity Scholars will expand in Fall 2020, thanks to additional funding from the AHA-MFOS endowment and other entities.

“Thanks to your success and support from donors, next year 50 more students will be accepted into the [MFOS] program,” President Fuchs told the MFOS graduating class in April. “This is a big deal, and I can’t wait to welcome the biggest class with President [Emeritus] Machen next year.”

From Fixing Cars to Soaring

The first graduating class of Opportunity Scholars crossed the stage in 2010, ushering in a proud tradition of MFOS alumni building better lives for themselves and paving the way for others.

One of those success stories belongs to Mario Agosto (BA ’18, MS ’19). A current board member of AHA, Agosto is one of the MFOS’s most enthusiastic ambassadors.

“The MFOS scholarship was the greatest blessing that I could have received,” he says. “When I came to UF, I realized, ‘This isn’t just an education. This is a culture. This is me having the ability to transform my future family’s lives.’”

One of five siblings, Agosto was born in Bayamon, Puerto Rico, the son of an electric-company lineman. After Agosto’s father was injured doing dangerous high-voltage work, the family moved to Ocala in search of better opportunities. Agosto was 8 at the time.

“Those were really, really difficult times,” he recalls.

To make ends meet, Agosto’s father began fixing up old cars, a skill he passed on to his son. 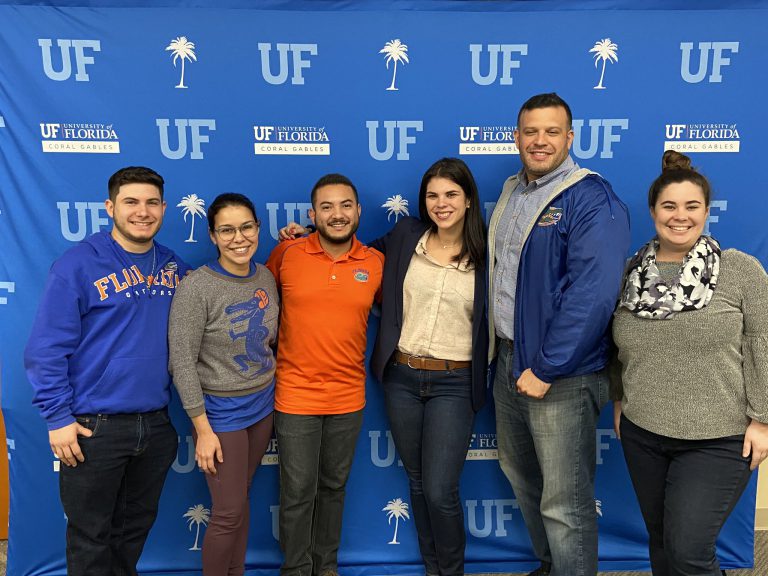 “That’s where I got my entrepreneurial spirit,” he says. “I didn’t want to be a burden on my family as a teenager, so that’s how I paid for my phone bill and gas.”

But as he neared high school graduation, Agosto knew fixing cars wouldn’t pay for four years of college. Encouraged by his father to have faith that the money would come from somewhere, he applied to UF, with his sights on becoming a lawyer.

“Once I got accepted and got MFOS, I was able to put away all my fears and focus on how I was going to maximize the college experience,” he says.

“Maximize” is an understatement. As a pre-law student, Agosto served as UF student body vice president, as president of the Hispanic Student Association and as a Florida Cicerone. He also became a member of Florida Blue Key and was tapped into the UF Hall of Fame.

After earning a bachelor’s in criminology in 2018, Agosto pivoted from law to real estate, earning a master’s degree in 2019. Today, he works as a financial analyst for a real estate developer in Boca Raton and is the youngest member of the MFOS Leadership Council.

Agosto’s personal experience has taught him how transformational an MFOS scholarship can be. Now he hopes his fellow Gators will be inspired to donate to the AHA-MFOS fund and give other high-achieving, low-income students a chance to get “the education of a lifetime.”

“These students are beautifully gifted and already got into UF on their own academic merits,” he says. “They just need donors’ encouragement to be the ‘wind behind their backs,’ so to speak.

“It’s ultimately about how we can support these students and connect them with the right program so they are able to accomplish absolutely amazing things.”

Click here to give to the AHA-MFOS endowment fund, which supports MFOS students who graduated from high schools in Miami-Dade and Broward Counties. 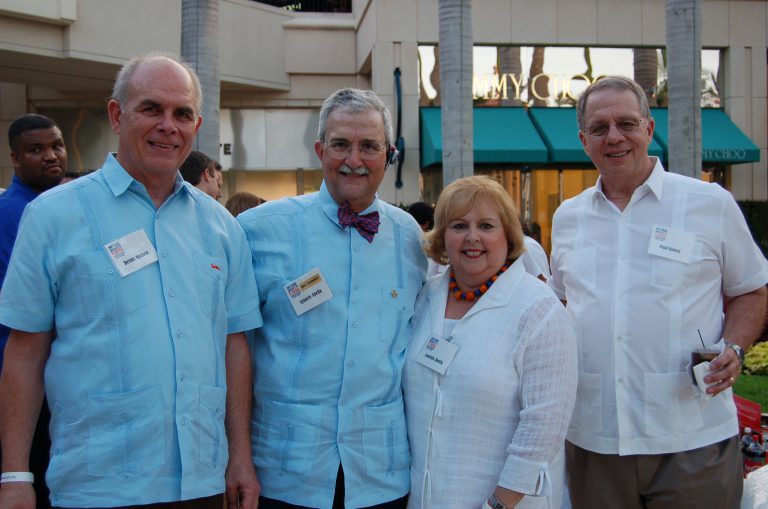 Among the original supporters of additional MFOS scholarships for South Floridians are President Bernie Machen and longtime AHA President Ignacio Abella. Shown left to right are Pres. Machen, Ignacio Abella, Lourdes Abella and Paul Robell at the 2006 Gator Guayabera Guateque celebration, held at the Village of Merrick Park, Coral Gables. The short-sleeved shirts worn by the men are guayaberas.