A generous donation from a Gator Band alumni couple ensures the music marches on.

“The passion that Anne and Rolf Kuhns have demonstrated through their gifts to the University of Florida and the Gator Band is a perfect reflection of their love for each other and dedication to enriching the lives of current and future students,” says Jay Watkins, director of the Gator Marching Band.

The band program is a hallmark of the University of Florida and encapsulates what it means to be a part of the Gator Nation.

— Onye Ozuzu, dean of the College of the Arts —

The Kuhnses, who both marched in the Gator Band in the late 1960s, are committing an estate gift to establish the Rolf M. and Anne T. Kuhns Director of the Gator Marching Band, an endowed chair for a thought-leader in the arts. The endowed chair ensures a continual stream of funding, which provides flexibility in both time and money to the band program and its students. Appointment to an endowed chair is one of the highest honors an academic can receive. 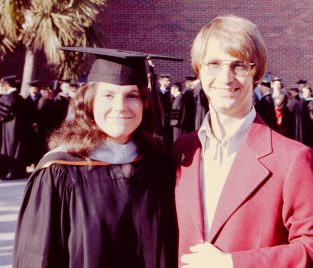 A trumpet player and educator, Anne Kuhns earned dual degrees from the University of Florida. This 1975 photo shows Anne and Rolf on her graduation day in 1975, when she received her master’s degree in education. Photo courtesy Rolf and Anne Kuhns.

This chair is the second endowed professorship in the College of the Arts. The first was the Andrew Banks Family Endowed Chair in the School of Art + Art History.

“The College of the Arts is incredibly grateful for the Kuhnses’ transformational investment in the band,” says Onye Ozuzu, dean of the College of the Arts. “The band program is a hallmark of the University of Florida and encapsulates what it means to be a part of the Gator Nation.”

“The Kuhnses’ generosity affirms their firsthand understanding of why music matters to society and how the band shapes the student experience across the educational and cultural landscape,” Dean Ozuzu added. 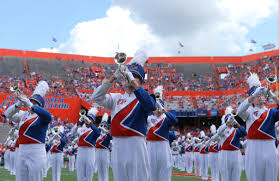 UF’s Fightin’ Gator Marching Band, also known as The Pride of the Sunshine, performs at every Florida Gators home football game and at pep rallies and parades, as well as select away games. Its roots go back more than 100 years to 1914, when Gator “Pug” Hamilton formed a 16-member ensemble called The Cadet Band. Photo: Courtney Culbreath / Copyright 2016 University Athletic Association

“The Gator Marching Band is like family,” the Kuhnses say. “The experiences we had in the band were instrumental in shaping major moments in our lives.”

“Being in band taught us about teamwork, humility, work ethic and so much more, which truly formed us into the people we are today,” they explained. “We wanted to give back to students and the program so that generations of musicians may have the transformational experience and opportunities afforded to them by the Gator Band.” 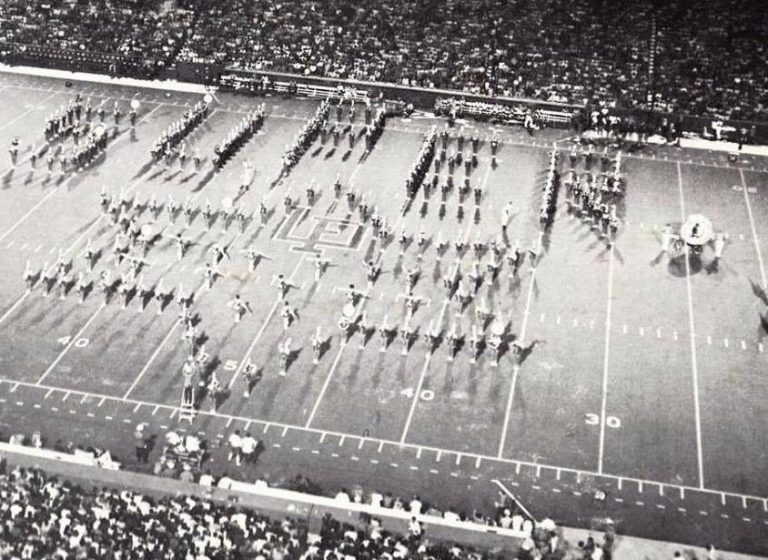 During the 1960s and early ‘70s, Rolf played clarinet and Anne, trumpet, in The Pride of the Sunshine. This photo from 1971 shows the band forming a star shape as they perform the song “Jesus Christ Superstar” at halftime.