As the country — and UF — confronted racism, Maude Brown Lofton found herself taking a chance on a school and a profession that had once been largely closed to her
By David Finnerty
“As you go through life there are certain paths that you go down not knowing where they’re going to lead you, and you just take the journey. I look at the University of Florida as being an important part of my journey.” – Dr. Maude Brown Lofton

Established in 2012 by a group of donors in memory of Willie J. Sanders to support scholarships for students committed to making a meaningful contribution to a pluralistic community and a diverse student body.

In 1962, long before she was a doctor or a missus, Maude Brown was a sensible new high school graduate searching for a college. The University of Florida wasn’t on her list, though. It didn’t matter that UF was only 70 miles from her home in Jacksonville. Or that it was affordable. Or that its academic reputation was on the rise.

“In those days, African American students weren’t welcomed at the University of Florida,” the now Dr. Maude Brown Lofton explains. “The state was still fairly segregated. I didn’t see myself being a Gator.”

It was a practical critique. George Starke had become UF’s first black student just four years earlier. Until then state law had banned Floridians who looked like him and Dr. Lofton. To keep Starke safe that historical September 1958, Gainesville policemen watched over his home at night and undercover troopers from Florida Highway Patrol sat in on his classes.

So when seven other black students enrolled in the university in fall 1962, the future Dr. Lofton wasn’t among them. Instead, she went north to Spelman College in Atlanta. There, whenever she could, she’d slip from campus to listen to Dr. Martin Luther King Jr. preach at nearby Ebenezer Baptist Church. Inside that red-brick church in the city’s Sweet Auburn neighborhood, she and her friends shared a Dream that became a movement: civil rights in the Deep South. 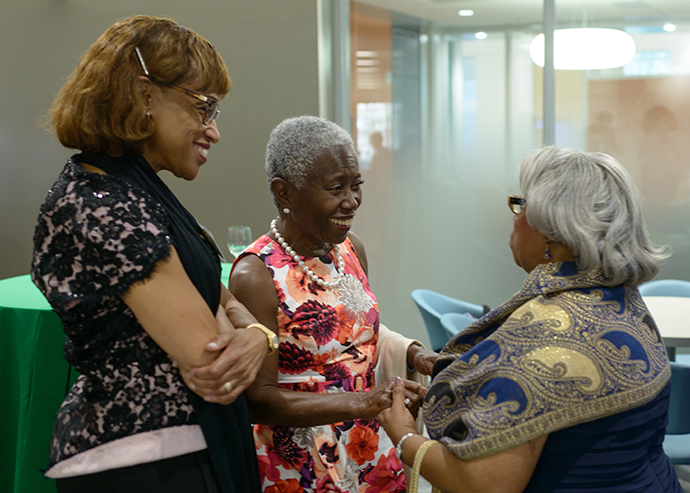 Dr. Maude Brown Lofton (center) and Dr. Alison Clarke DeSouza catch up with other Gators during a College of Medicine reunion in 2017.

“When I got to Atlanta as a college freshman the city was totally segregated,” she recalls. “When we went out on a date to the downtown theaters we would have to sit in the balcony. That didn’t surprise me. It was just more of the same but in a bigger city.”

Years later — the ugliness of bigotry and racism still bubbling — the University of Florida would become a mainspring to heal the state’s long history of discrimination.

“As you go through life there are certain paths that you go down not knowing where they’re going to lead you, and you just take the journey,” she says. “I look at the University of Florida as being an important part of my journey.”

Her plan was to be a biology teacher. But at Spelman College, Dr. Lofton — granddaughter of a domestic worker and daughter of a postman — realized she was meant for something else.

That was a problem. A kidney infection had long before taken her mother. It was her grandmother and father who had raised Maude, her little sister and brother. Their extra money (and there wasn’t much of it) was going toward her college education.

“I remember it was a hot day in the spring of my junior year. I called my grandmother and told her, ‘I don’t want to be a teacher, this is just not for me,’” Dr. Lofton says. “She asked me what I was going to do, and I said, ‘I don’t know.’”

As fate would have it, that very night her grandmother was working a dinner party for the family that employed her. One of the guests was a doctor she knew, and when he saw the sadness on the old woman’s face, he asked what was wrong. She explained, and he told her that her granddaughter should see him the next time she came home.

And that’s what Dr. Lofton did. The doctor introduced the lost college student to the growing profession of medical technology and offered her a job. It seemed a good fit. Dr. Lofton returned to Atlanta long enough to finish her bachelor’s degree program and to serve as senior class president, then immediately afterward became a medical technician intern at Duval Medical Center, now UF Health Jacksonville.

Life, though, soon took another unexpected turn. Eight years into her career and with UF’s medical school aggressively recruiting minority students, Dr. Lofton was being courted by the same university where she once felt unwanted.

“I had to be talked into it,” she admits. “I’d never had that aspiration to go to medical school; I never saw myself in that role. But when the opportunity came about, I thought, ‘Well, maybe I can do that.’”

UF professor Willie Sanders (BSE ’70) and the black medical students already enrolled convinced her to give the university and its medical school a try.

“It was such a great atmosphere, everybody was so encouraging. I said, ‘Well, hey, I can be a part of this,’” Dr. Lofton recalls.

With that, she says, in 1975 she became an “accidental physician.”

Accident or not, Dr. Lofton, now retired and living in Colorado, turned out to be a star. She went on to be UF’s chief resident of pediatrics and later a faculty member at Howard University, the University of Alabama and the University of Louisville.

“I never thought I would not be successful in life, but I never imagined that I would have done some of the things that I have done,” she says. “The University of Florida is where I got my start and it’s where my fondest memories are.”

A Time to Heal

“Everything was very different during that time,” Dr. Lofton says of the early 1960s. “By the time I’d made the decision to apply to medical school things had changed tremendously. It wasn’t perfect but there was such a good atmosphere at the University of Florida. We got along well with our classmates because everyone was in the same boat — just trying to make it through medical school.”

Still, there were differences, she says. Most of the black students in the medical college had earned their degrees at small historically black colleges, and for some UF’s large campus was overwhelming. Others had never shared a classroom with white peers. The university’s Office of Minority Affairs and new minority-focused student organizations had been put in place to smooth the transition. 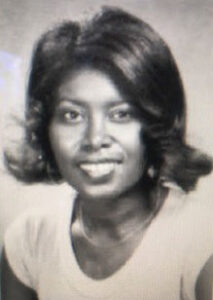 “The university was finding its way and did it well, because even now you have a strong sense of loyalty on the part of minority medical students, as well as undergraduates,” Dr. Lofton says. “I’m very proud of the time I spent there, and I’m very happy with the things that I see the university doing now.”

It’s one of the big reasons Dr. Lofton has been so generous in her support of the university, especially when it comes to scholarships in the College of Medicine.

“I see the University of Florida as being a place that leads and being so far ahead of other places [in terms of campus diversity],” she says. “It still has its emphasis on creating opportunity — not just for African-American students but the diversity that is America. The university has never backed away from that.”

The other reason for her philanthropy is more personal. Dr. Lofton understands how challenging medical school is, especially for students who need jobs to pay for it. While a student herself she worked weekends at North Regional Hospital her first year in Gainesville to make ends meet.

“Even though I was a grown person when I decided to go back to school, I didn’t have the money to pay tuition. If I hadn’t gotten scholarships and grants it would have been very difficult for me,” she says.

“There are lots of little girls who grew up like me, not of means but all they need is an opportunity. There are kids everywhere who just need a chance to experience things and to be in a position or a place where they can see what the world has to offer.

“And what they have to offer the world.”

Established in 2012 by a group of donors in memory of Willie J. Sanders to support scholarships for students committed to making a meaningful contribution to a pluralistic community and a diverse student body.