Help support UF’s work in protecting the planet's ecosystems by making your gift to the Jon and Beverly Thompson Earth Systems Program Endowment.

Fort Myers’ Jon (BS 61, MS 62) and Beverly (MED 62) Thompson’s $10 million gift to the University of Florida will help people better understand and adapt to our strange new world. Their gift is the cornerstone of a $35.7 million UF initiative to promote research-based information and responses to environmental issues such as rising oceans, eroding coastlines, saltwater intrusion into freshwater supplies, “sunny day” flooding in Miami and other seaside cities, disappearing wetlands and lingering droughts.

The Thompsons’ gift will be used to enhance outreach, discovery and information-sharing. The hope is to translate complex — and sometimes contentious — topics into digestible data that can educate the public, prepare communities and influence policymakers. It is the first phase of the university’s multidisciplinary Earth Systems Initiative.

“Beverly and I have been interested in the geologic history of our planet for a long time,” said Jon Thompson. “The natural systems that have operated since Earth formed are interrelated and very complex. Understanding these systems becomes even more complicated when we add human interactions.”

Thompson called the research carried out at the University of Florida “critical to our understanding of Earth’s systems.”

“We believe it is essential that our university step forward to continue research on problems such as biodiversity and environmental conservation,” he said. 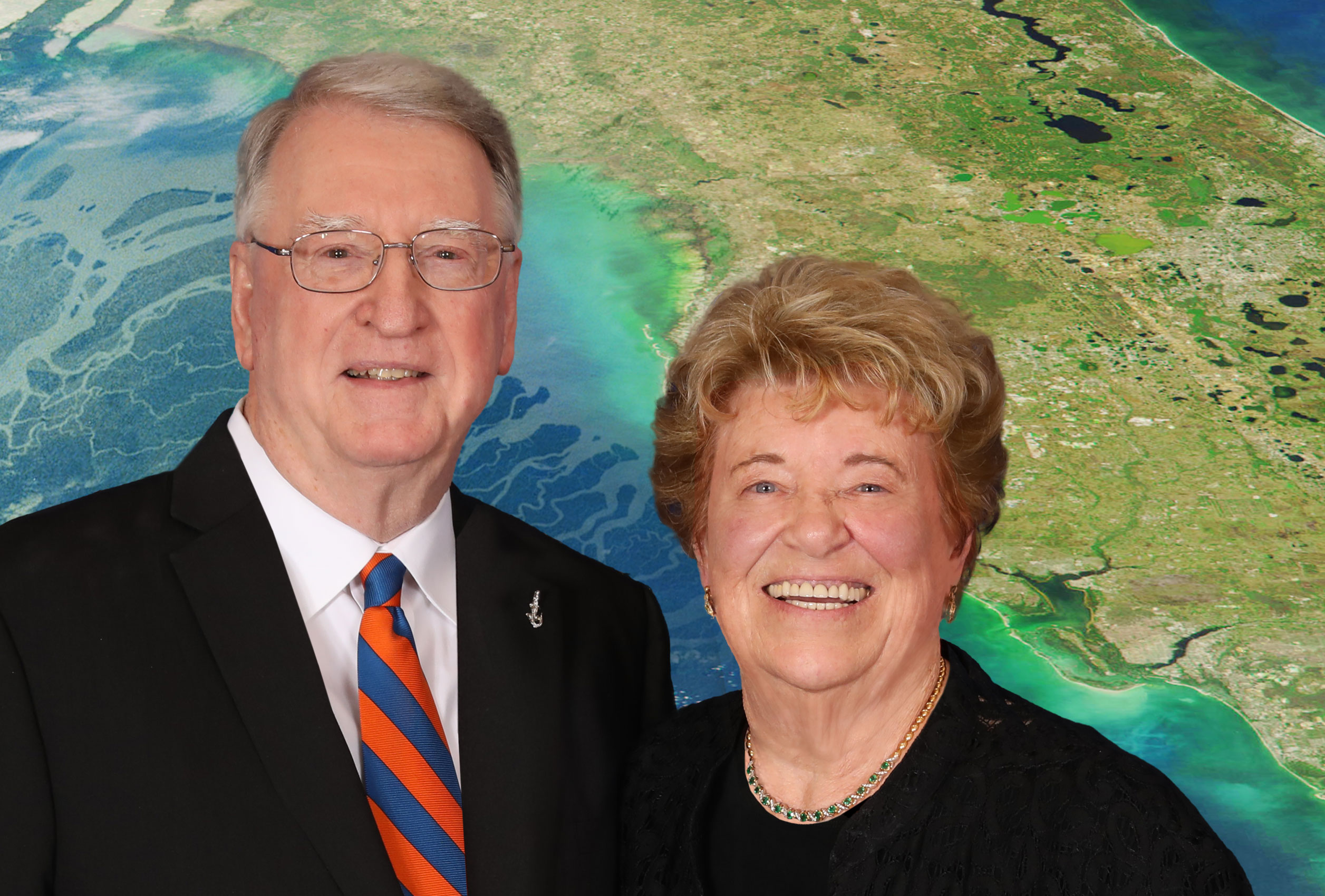 The university’s depth and world-class research — along with the state’s rich ecosystem and the peninsula’s perilous position as an environment-change bellwether — position UF as an international thought-leader in Earth systems studies and problem-solving, UF President Kent Fuchs says. Florida’s ecosystems include more than 4,000 plant species; and the state supports the country’s highest concentration of federally sensitive, threatened or endangered species. Communities on both sides of the state are being reshaped by stronger storms and rising marine waters.

“Our changing environment is one of humankind’s most urgent issues,” Fuchs said. “We need to figure out how to adjust and flourish in a new reality. Not just for those of us here now, but for the generations that will follow us. We’re thankful for people like Jon and Beverly for putting UF on a path to address this critical concern.”

“Confusion among citizens and those in decision-making positions in government is affecting the present and future direction of the natural world,” Jon Thompson said. “It is our belief that this initiative will more clearly disseminate accurate information and thus help the public better understand and address these vital issues,” he said.

The initiative’s early priorities will be legislative outreach, information sharing with media and communities, curriculum enhancement for children in kindergarten through high school and engagement with the general public. In addition, the university will create an Earth systems center to serve as a resource for Floridians, UF students and faculty, policymakers and scientists around the world. The collaborative center will be integrated into the Florida Museum of Natural History, and serve as a key part of the university’s public outreach efforts.

“Florida is ground zero when it comes to climate change and its impact on our environment,” says Doug Jones, the museum’s director. “If we’re going to address this problem, we need to do a better job understanding its ramifications and explaining to people what we can do about it now. The Thompsons’ gift will support a new platform that helps us all be good stewards of the environment.”

The Thompsons’ investment in UF’s Earth sciences programs will further position the university as one of the world’s preeminent leaders addressing 21st century issues.

“Jon and Beverly understand that confronting environmental issues requires an interdisciplinary approach that considers our planet as a complex system,” says David Richardson, Ph.D., dean of the College of Liberal Arts and Sciences. “Communicating the underlying science to the public is a challenge, but their vision will dramatically enhance UF’s impact in Earth system research and outreach.“

Jon Thompson earned his bachelor’s and master’s degrees in geological sciences at UF in 1961 and 1962. He retired as president of ExxonMobil Exploration Co. and vice president of ExxonMobil Corp. in 2004 after more than 41 years of service. He serves on the College of Liberal Arts and Sciences’ Geology Advisory Board, and was named a UF distinguished alumnus in 2005.

Beverly Thompson graduated from UF with a master’s degree in education in 1962. She is a member of the UF Foundation’s Donor Relations Advisory Council and the Machen Florida Opportunity Scholars Leadership Council. In 2017, the couple received the University of Florida Foundation’s Lifetime Philanthropists Award. The Thompsons are members of the President’s Campaign Cabinet.

“Years from now, Gators are going to look back at this time and realize that the University of Florida has risen to rank among the world’s best institutions of higher learning because of Jon and Beverly Thompson,” says Al Warrington (BSBA 58), one of the Thompsons’ oldest friends and the UF business college’s namesake. “We are a greater university today because of their generosity and care, and we’ll be an even greater university tomorrow because of the seeds they’re planting now.”

Jon Thompson said that he and his wife are grateful to the University of Florida “for making an impact on our lives.”

“We are pleased to be able to give back in this way,” he said.

Help support UF’s work in protecting the planet's ecosystems by making your gift to the Jon and Beverly Thompson Earth Systems Program Endowment.

Your Health – Finding the Cure is Only Half the Story

To Honor A Father