Scott Hawkins discovered early on his knack for leadership, and he’s used that talent to help others Go Greater in their own lives.
By David Finnerty
“From my earliest recollections of Scott, he’s always been a man of purpose. What we’ll all turn out to be, who knows? But there was never any doubt that Scott would live a life that’s purposeful and meaningful.” – Eugene Pettis, UF classmate and attorney

For students who do well academically, but who also demonstrate good character and honesty and leadership ability.

Give now to this fund

There was a time long ago when Scott Hawkins wondered if life as a Presbyterian minister would be his calling. He’d heard the whisper loud enough … and long enough … to even look into divinity school.

But as so often happens, fate had other plans. The University of Florida, at the urging of his high school honors English teacher, for starters; and, later, UF law school, an almost accidental dip into politics and an unexpected invitation to graduate school in Scotland. And, as the years tumbled along, a law career, community advocacy, a tenure as president of The Florida Bar, chairmanship of the UF Foundation and leadership positions on assorted university boards and committees.

From Little League to Law

Hawkins turned 53 the summer his peers elected him president of The Florida Bar in 2011. Votes won on his reputation as a “straight arrow” and for being honest, fair-minded, a consensus-builder and problem-solver. 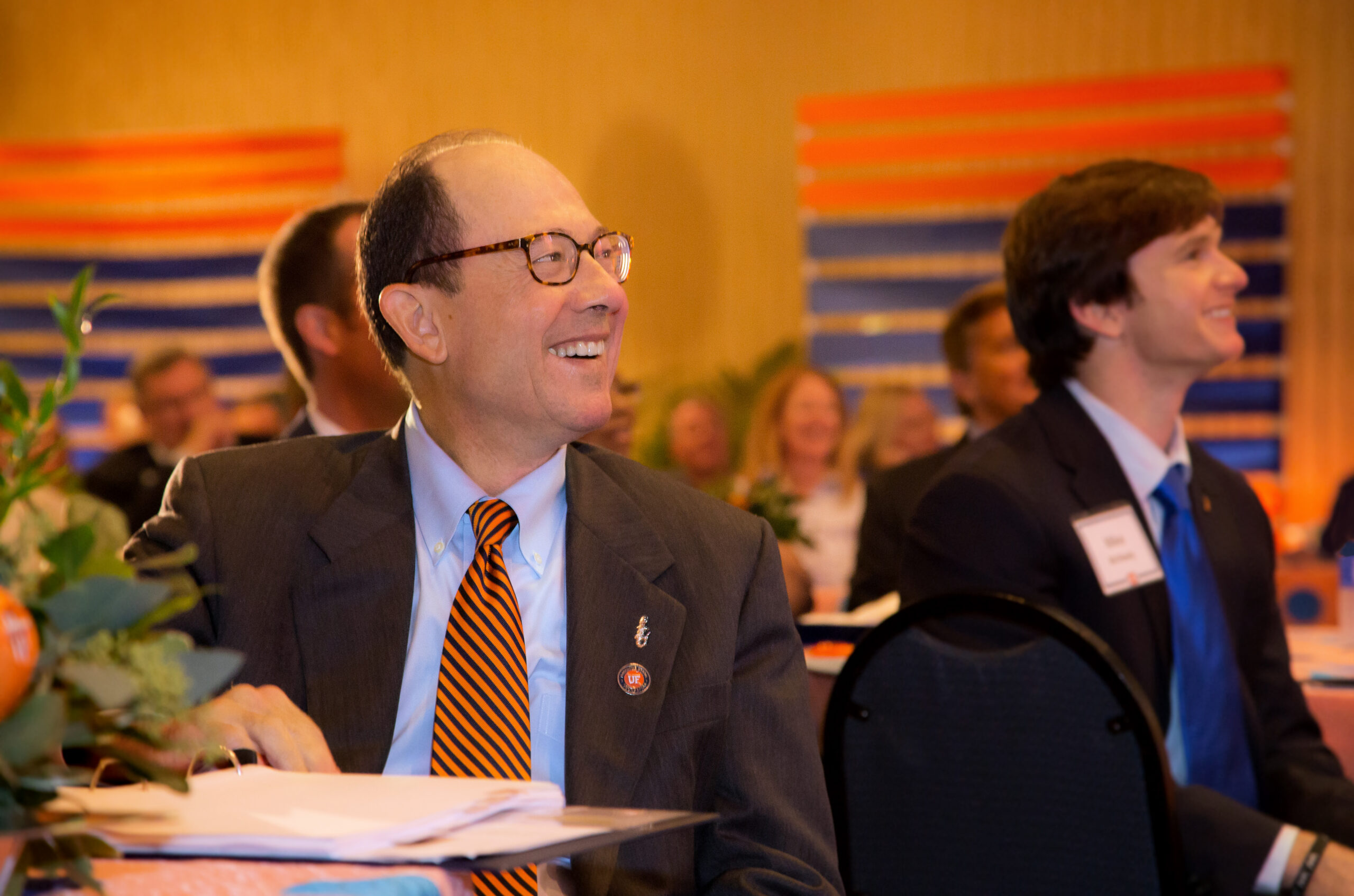 As the 1960s vanished into the ’70s, Hawkins was a 13-year-old baseball star in Tampa’s Little League and captain of a team without a coach. With no adults in charge, he assigned field positions and batting order. His teammates willingly followed.

It wasn’t the first time he’d been looked to for direction. As a fourth-grader at Bryant Elementary, classmates selected him their student council vice president. This was during the peak of the South’s struggles for civil rights, and Tampa hadn’t been immune to the tension. But that year, in a thundering statement of harmony that was far less common in other schools, Hawkins served beside a Black girl who’d been chosen class president.

“Scott has been consistent through every phase of his life. There’s not a selfish bone in his body,” UF classmate Eugene Pettis (BA ’82, JD ’85) says. “He’s always thinking about the greater good and putting others ahead of his own interests.”

It was his grandfather who’d instilled that sense of responsibility. George Wells, his mother’s father, believed in hard work, integrity and loyalty, standing up for the little guy and service above self.

“My grandfather was very influential with me,” Hawkins says. “He was a leader, and he led me this way.”

Those lessons framed Hawkins’ undergraduate years at UF. While earning an economics degree with honors in Gainesville, he tutored students in the subject, was president of Sigma Chi fraternity and, when just 21, was asked to manage George Kirkpatrick’s longshot Florida Senate election campaign. (Kirkpatrick would go on to win the seat and represent North Central Florida for the next 20 years. Hawkins, though, would turn down an offer for a permanent job on Kirkpatrick’s staff; he’d had enough of politics.)

“I thought, if I’m able to help someone else because of my gifts, that’s what I should do. That’s just a product of how I’m wired,” Hawkins says.

UF law school came next. Then marriage, a Rotary International scholarship to the University of Edinburgh to earn an MBA and, in 1985, a job pitch from the law firm Jones, Foster, Johnston & Stubbs in West Palm Beach, where Hawkins has risen to vice chair.All those accomplishments go back to George Wells and the campus leaders Hawkins met through the university, he says. It’s a who’s who of 1980s-era movers and shakers and other Gators: among them, presidents J. Wayne Reitz and Marshall Criser (BSBA ’49, JD ’51); deans Bob Jerry in UF Law and Calvin VanderWerf (his father-in-law) in the College of Liberal Arts and Sciences; and one-time Vice President for Development and Alumni Relations Bob Lindgren (BSBA ’76, JD ’81).

“These were all extraordinary leaders,” Hawkins says. “I look back on them with the realization of how blessed and fortunate I was to be around these men.”

Hawkins is a special leader in his own right, Pettis argues. A partner at Haliczer, Pettis & Schwamm, and Florida Bar president two years after Hawkins, he’s had a ringside seat witnessing his old friend’s talent for leadership — both in college and later on The Florida Bar’s board of governors.

“People trust Scott,” Pettis says. “And because he’s careful to consider the overall impact his decisions will have — Scott wants his decisions to lift others — that creates buy-in.”

Beth McCague (BSBA ’74), the founder of mediation and arbitration provider McCague & Company, is a longtime colleague of Hawkins on the UF Foundation’s board of directors.

A Man of Purpose

On a wet Friday in the winter of his senior year, Hawkins missed a meeting with legendary economics professor Dave Denslow. Or, rather, it was Denslow who missed it. Closing in on four decades later, the now-retired Denslow swears it was a scheduling mishap. Hawkins, in good humor, concedes benefit of the doubt.

Nevertheless, the meeting-that-wasn’t set Hawkins on an unanticipated and exhilarating course. “It was an inflection point in my journey,” he says.

Denslow, who remembers Hawkins as “a great student,” had started teaching a televised Introduction to Economics class that semester and was overwhelmed. To keep up, he’d enlisted his father, a retired Methodist minister, to work from Denslow’s campus office 30 hours a week as an assistant. It was the senior Denslow who greeted Hawkins that afternoon. And as minutes ticked in wait for the popular professor’s return, Hawkins and the old man eased into a conversation about Hawkins’ future.

Hawkins chuckles at the recollection and his good fortune in meeting Denslow’s father. If not for that chance encounter, law school and the dominos that later fell might not have happened, he says.

“All these dots are connected,” Hawkins says of the twists in his life’s path. “I believe one chapter leads to another. Did I see all this happening? No. But it’s given me an opportunity to live out my Christian faith.”

For him, that’s more than his Bible studies and serving as an elder at First Presbyterian Church in North Palm Beach. Treating others with kindness, lending a hand, bringing “honesty to my profession” and doing “the right thing” are central to living that faith, he explains.

Which is why, in 1987, Hawkins joined the board of The Children’s Place, then a fledgling center for abused children in Palm Beach County. There — in the company of crack babies and broken kids — the young lawyer rocketed to board president and expanded the board from four to 20 members, guided the creation of Connor’s Nursery for HIV-positive infants and helped build a foundation that eventually led to a merger with another charity to form what’s now Home Safe.

“The Children’s Place became an incredibly important place in my life,” Hawkins says; and, after a long pause, adds: “I have a desire to serve people who struggle.”

That’s no surprise to Pettis.

“From my earliest recollections of Scott, he’s always been a man of purpose,” Pettis says. “What we’ll all turn out to be, who knows? But there was never any doubt that Scott would live a life that’s purposeful and meaningful.”

UF is one of Hawkins’ favorite ways to do that. He’s had a bigtime behind-the-scenes’ role in the university’s climb into the top 10. In the last 20 years or so, he’s been chairman of the UF Foundation’s board of directors, alumni association president, member of the College of Medicine’s leadership council and College of Liberal Arts and Sciences’ council of advisers for the Bob Graham Center, and much, much more. Hawkins is currently chairman of the law school’s Law Center Association Board of Trustees.

It’s not just time that Hawkins invests in his alma mater. He and his wife, Lisa (BA ’75, MED ’84), have given more than $1 million for a scholarship in the law college, construction of UF’s Medical Education Building, support for Machen Florida Opportunity Scholars and an assortment of other campus initiatives.

Especially telling is the Scott and Lisa Hawkins Character and Leadership Scholarship.

“We wanted it to be for students who did well academically, but who also demonstrate good character and honesty and leadership ability,” Hawkins says. “We don’t emphasis those qualities enough in this (law) profession.”

Their support of Opportunity Scholars is for a different reason. Those students, unlike most at UF, are the first in their families to attend college and come from some of the state’s poorest households.

“I like the big idea of giving highly talented young people a chance to study at the University of Florida — who wouldn’t have that chance without the scholarship. One of the great things about it is it’s the private sector responding to an important need,” Hawkins says.

“You can help transform lives forever.”

“With Scott, everything he touches, he’s going to give all he has. Not for himself, but for the betterment of the organization and the people it benefits,” McCague says. “That’s the kind of person Scott Hawkins is. He’s not ambitious for himself. He’s ambitious for the causes he cares about.”

For students who do well academically, but who also demonstrate good character and honesty and leadership ability.

Give now to this fund