That’s the philosophy of Hyatt and Cici Brown, who credit UF with paving the way to a bright future for their family. Says Cici: “When I sit back and look at the value of that education, it’s phenomenal.”
By David Finnerty
“When it comes to education there’s no better place to give back to than the University of Florida. That’s our future.” – Cici Brown

Make a gift to UF’s greatest needs and support the university where it needs it most and make an immediate impact.

College, for Adrian Brown, wasn’t to be. The Great Depression and other storms brewing across the world in the 1920s and ’30s sent him down another path. For his sons, though, Brown wanted more. He wanted them to be Gators.

Now, more than half a century after his oldest son’s UF graduation, generations of Browns are forever linked to the University of Florida.

It was in the mid-1940s, Hyatt Brown (BSBA ’59) says, when his father suggested Hyatt’s big brother leave Daytona Beach to earn his degree in Gainesville.

“My mother thought they should send him East to go to school,” Hyatt recalls. “My father said, ‘No, if you’re going to go into business in the state of Florida you need to go to the University of Florida.’”

And decades after that – their grandfather’s wisdom still holding true – Hyatt’s own sons, Powell (BACH ’89), Preston (BA ’95) and Kellim (BA ’98), followed in the footsteps of their father and uncle. 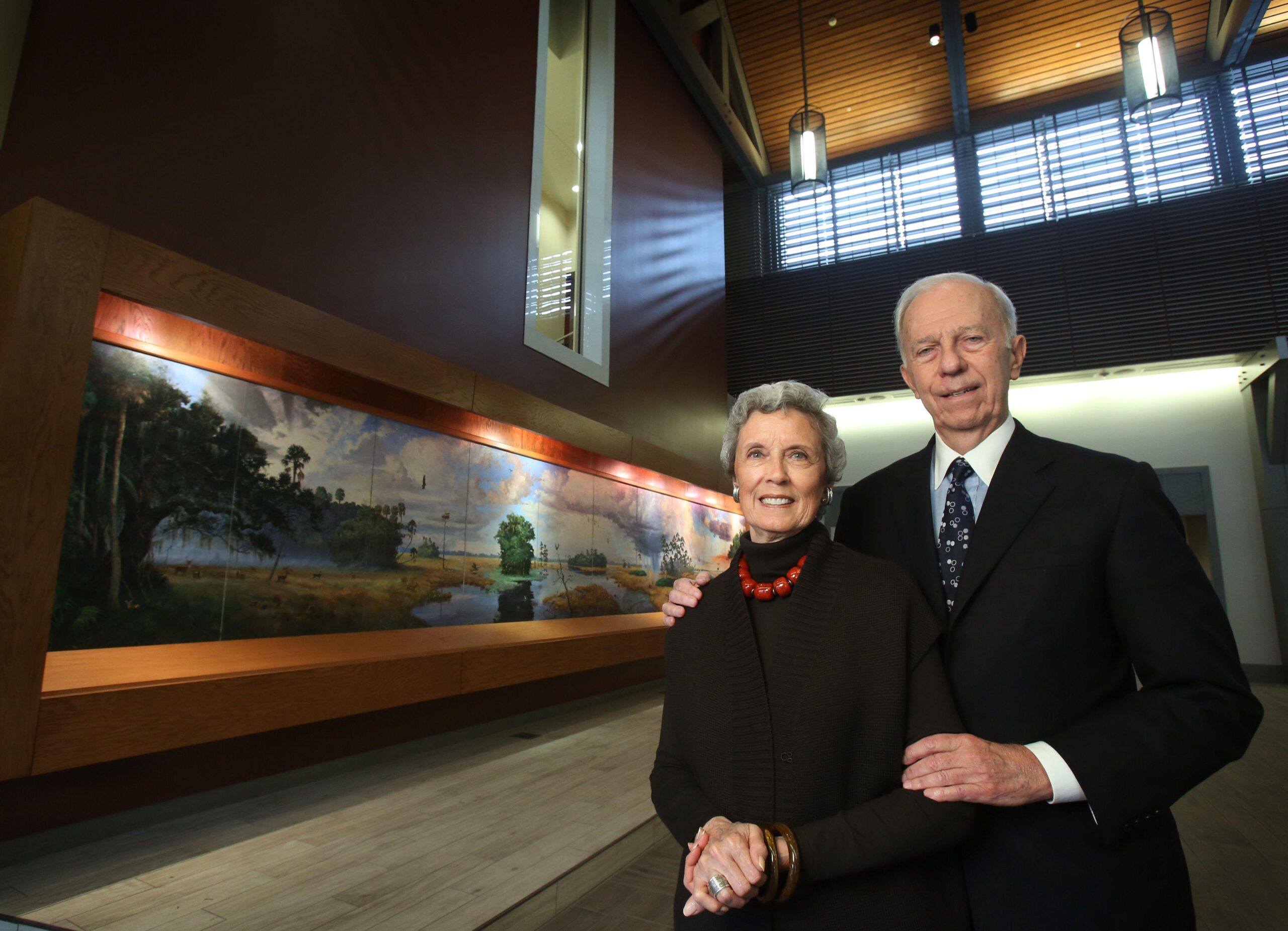 The Browns at the opening of the Cici and Hyatt Brown Museum of Art in Daytona Beach.

“The university gave Hyatt and our three sons and Hyatt’s brother an incredible education,” Cici, the family’s matriarch, says. “When I sit back and look at the value of that education, it’s phenomenal.”

In Hyatt’s case, it helped turn his father’s small insurance business into what is now an international brokerage firm with 10,000 teammates and 217 offices – the sixth largest company of its kind in the United States.

“There’s definitely an advantage in going to the University of Florida,” Hyatt says. “Those relationships and connections are forever. Some of the people you meet will be your best friends for the rest of your life.”

The Start of Something Big

In 1939, cousins Adrian Brown and Charles Owen established Brown & Owen Insurance, a partnership, in the second story rear of the Wingate Building in Daytona Beach.

In 1955, Worley, fresh out of UF’s law school, joined his father. Brown & Brown became the new company name. In 1959, brand new UF alumnus Hyatt joined the company fulltime. In 1961, Worley was appointed chairman of the Florida Industrial Commission by Gov. Ferris Bryant. He left Brown & Brown, and Adrian Brown sold the agency to Hyatt and retired.

“We had eight employees, including my mother, and we made a profit of $1,400,” Hyatt says of his first year as B&B’s CEO and owner.

But it didn’t take long for Hyatt to improve on those numbers. He worked hard, perfected efficiencies, hired can-do associates and encouraged them to take initiative. Soon, the firm was on an upswing.

“I felt a responsibility to bring on good people and give them an opportunity to rise over their lifetimes. A lot of people have done well with Brown & Brown,” Hyatt says. “That makes me really happy.”

All these years later – after passing CEO duties on to son Powell in 2009 – Hyatt remains B&B’s chairman while settling into semi-retirement with Cici in Ormond Beach. Not much else has changed for the Browns, however. Just as the couple has always done, a lot of their time and resources are given back to their community and to the University of Florida.

Cici, for instance, has been involved with Daytona Beach’s Museum of Arts and Sciences since 1971 and is an outspoken advocate for breast cancer screenings. For eight years in the ’70s, Hyatt was a member of Florida’s House of Representatives, the final two as speaker, and was also on the Florida Board of Regents. Both Browns are Stetson University trustees. And their list of civic outreach goes on and on. 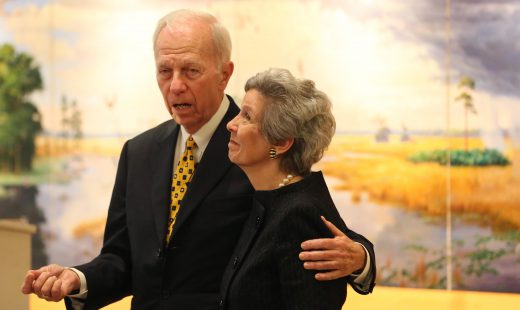 Over the years, a series of Volusia County organizations and causes have caught their attention. Among them, in 2012, the couple donated more than 2,700 oil and watercolor paintings from their private collection to Daytona Beach’s museum and spent $25 million to build and operate the 26,000-square-foot Cici and Hyatt Brown Museum of Art. This past summer, the couple pledged $15 million to renovate the city’s Riverfront Park, where Hyatt played as a child.

At UF, the Browns have established three endowed faculty positions – two chairs (one in the Warrington College of Business to promote leadership; the other in the College of Liberal Arts and Sciences, focused on the history of capitalism) and a professorship in CLAS’s Department of Anthropology. The couple also support Gator Athletics, Machen Florida Opportunity Scholars and an assortment of other programs.

There’s a reason UF is included on that list, Cici says.

“When it comes to education there’s no better place to give back to than the University of Florida,” she explains. “That’s our future.”

The University of Florida looms large in their family for as long as the Browns remember.

“We sort of had a Gator circus at our house all the time,” Cici says “With three sons growing up in a Gator household, it’s a no-brainer. It was chaos when there were football games. Our kids were pumped up from the time they were little boys.”

Fond as those memories are for Hyatt and Cici, their courtship with Gator football turned into a lasting relationship much earlier. Cici points to 1966 — the season quarterback Steve Spurrier (BSPE ’81) famously booted a 40-yard field goal in the closing minutes to beat Auburn, 30-27.

“The first time I ever went to a game in Gainesville was that fall,” Cici says. “I had on a sleeveless pink dress, hose, high-heels. I had my hair done. I had never been in a place that hot my entire life. I look back on that and think, ‘Oh, my gosh, the men used to wear ties too!’

“That was a big year for Steve Spurrier and the university,” she adds. “I’d never been around a college campus like this before. I grew up in the Northeast and had been to a lot of football games, but it was unbelievably different going to football games here.”

The game of UF football lore that stands out for Hyatt is 1997’s Sunshine Showdown with Florida State. Undefeated FSU strolled into The Swamp that November 23 atop the national rankings. To keep the Seminoles’ daunting defense off balance, then-coach Spurrier rotated quarterbacks Doug Johnson and Noah Brindise (BSESS ’99). Four Fred Taylor running touchdowns later, the Gators handed FSU its only stain on an otherwise perfect season, a 32-29 upset.

Most of Hyatt’s favorite UF memories have nothing to do with sports, however – like the time in the ’50s when his brother, Worley, was chair of Gator Growl and signed a German motorcycle high-wire act to drive bikes across a cable strung over the football stadium; or the night in 1958 a seemingly spontaneous “panty raid” rippled through campus.

“That was the first time I’d experienced mass hysteria,” he says. “By the time we got to the girls’ dorm they’d barricaded the doors. But no one wanted to leave, so the police came and shot everybody with teargas.

Nowadays, when the Browns reflect on the university and what it means to them, Hyatt insists that following his father’s advice to attend the University of Florida was one of the best decisions he ever made. Keeping the university a central part of their lives, Cici says, was another smart choice.

“I was taught that for every action there’s a reaction, and you pay the price – whether good or bad,” Cici says.

When it comes to UF, she says, their choices to be Gators turned out to be unforgettable.

Make a gift to UF’s greatest needs and support the university where it needs it most and make an immediate impact.