2013-2018 saw the university steepen its climb to the top, thanks in large part to one notable Gator
By David Finnerty

Help Where It’s Needed Most

Your gift to UF’s Greatest Needs maximizes your impact by providing vital support to the highest priorities.

The University of Florida’s first 165 years shimmer with milestones and accomplishments — the opening of Gainesville’s campus (1906), the first woman to enroll in fall classes (1925), the founding of what would later become Shands Hospital (1958), UF’s induction into the prestigious Association of American Universities (1985). But perhaps never in its rich history has there been a five-year span as transformative as the one that ended this fall.

Years from now, historians might very well look back on 2013-2018 as UF’s turning point — the quinquennial that triggered the university’s giant leap to become one of the nation’s very best public universities of the 21st century.

Consider this: during those years the state proclaimed UF a preeminent university, and with that declaration came a stronger commitment to its flagship school; the university climbed to No. 8 in the U.S. News and World Report’s annual rankings of best colleges and universities; outside research funding blossomed to more than $800 million; a bold plan to hire 500 additional faculty members was adopted; and a $3 billion campaign, UF’s most ambitious ever, was launched. And that’s just the top of a long list that also includes new high-tech and beautiful campus buildings, a town-and-gown partnership that combines the strengths of the university and the city of Gainesville to create the “New American City,” as well as more national championships in sports.

UF’s faculty, staff, students and alumni are at the heart of the university’s ascent, President Kent Fuchs said. 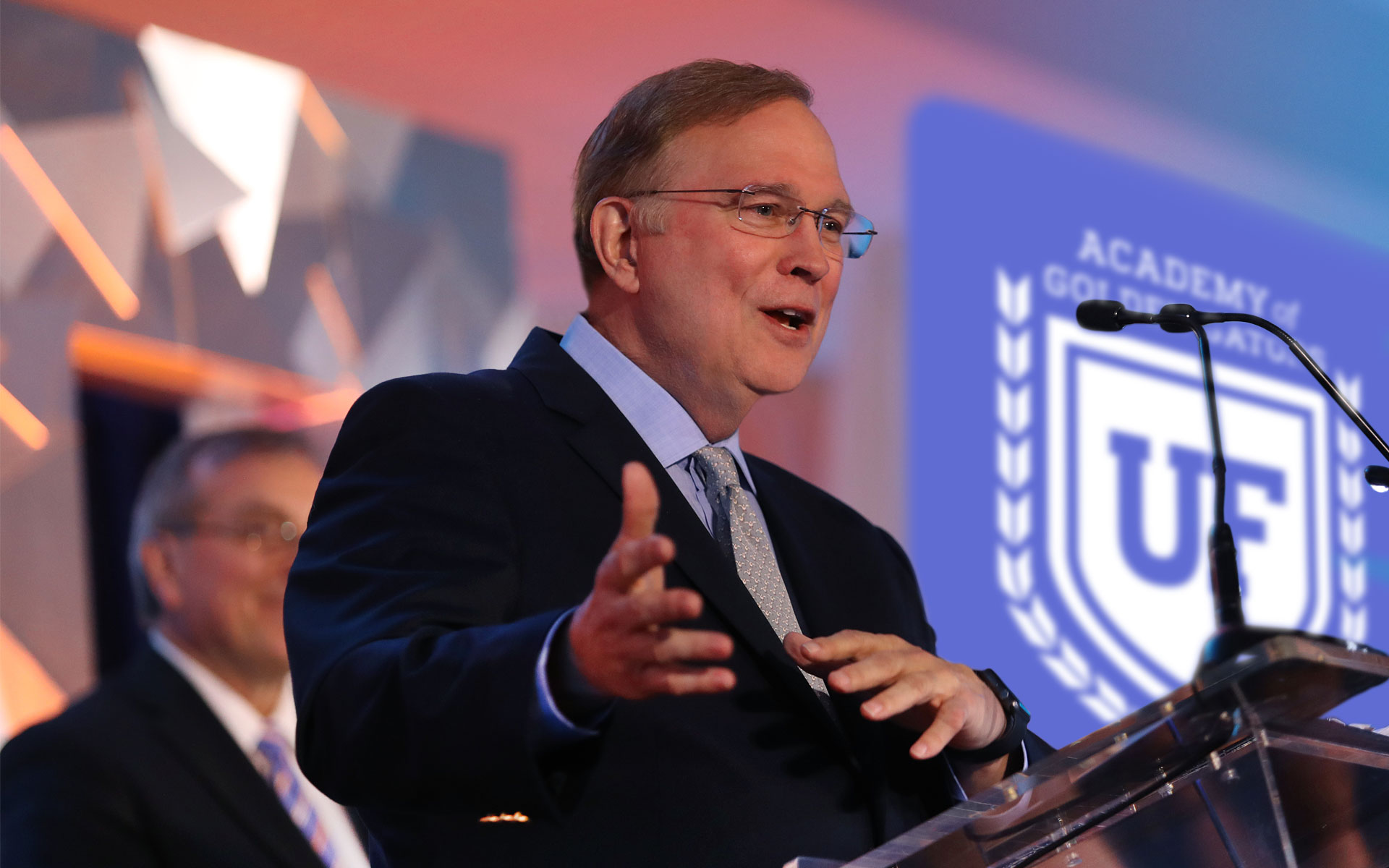 “The members of the Gator community have incredible shared ambitions, and they’re steadily achieving those ambitions,” he said. “My hope is that this will help us provide an even more exceptional educational experience for our excellent students.”

Bill Heavener (BSBA ’70) is one of the shepherds rethinking how UF serves its students, faculty and staff, Floridians and others.

“It has truly been an honor and privilege to serve the state and the University of Florida,” said Heavener, a UF trustee since 2013 and board chair during the last two years of the university’s mini-renaissance.

“My life has been profoundly impacted and enriched through the opportunities I’ve had to interact with many forward-thinking leaders who are making a significant difference in people’s lives each and every day,” he added. “I continue to be inspired by the dedication and determination of these leaders, and I am confident that we will continue to reach new levels of excellence.”

While some of the accomplishments are well known, the less visible steps — such as the new campus master plan — are just as important to move UF forward. New Board of Trustees Chair Mori Hosseini is following Heavener’s steps in that direction. Working with Heavener and other campus leaders, one of his goals is a Top 5 national ranking for the university.

“Much was accomplished under Bill Heavener’s leadership, and the University of Florida is poised to take the next step toward the goal of becoming a Top 5 public university,” Hosseini said. “The foundation has been set, and I look forward to working with my fellow trustees, university leaders, faculty, students, staff, alumni and friends in continuing to advance one of America’s great universities.”

UF’s rise is due in part to Heavener’s leadership and devotion to his alma mater, said Tom Mitchell, UF’s vice president for Advancement. He points to Heavener’s visionary leadership in a string of $400 million-plus fundraising years and the university’s $3 billion Go Greater campaign, which has already passed the halfway point to its fundraising goal, with $1.75 billion raised in just four years.

“Bill is a humble guy. He works with people however he can to help them reach their potential,” Mitchell said. “Because of his leadership, the University of Florida is better prepared to assist students and faculty in achieving their goals; and, ultimately, the university is favorably positioned to serve society as a whole.”

Help Where It’s Needed Most

Your gift to UF’s Greatest Needs maximizes your impact by providing vital support to the highest priorities.