The Otis Hawkins Center trains student-athletics to be winners outside the sports arena.
By David Finnerty
“The Otis Hawkins Center at Farrior Hall was the best way possible to start the university’s Go Greater campaign, because, really, it represents everything UF is about: our students, opportunity, creating the leaders of tomorrow, solving problems, being the best. It’s a shining example of what UF is all about and what we, the Gator Nation, can accomplish together.” – UF President Kent Fuchs

Or, for that matter, sports.

For all but a rare few NCAA student-athletes, the glory days of sports fade with graduation. It’s the third strike, missed free throw, rimmed-out putt reality of college athletics. For every Emmitt Smith gridiron legend and Abby Wambach soccer star, 98 of their Gator teammates will go pro in careers outside the sports arena. That’s where UF’s Otis Hawkins Center comes in. The 82,613-square-foot masterwork is designed to make sure those Gators are champions, too.

Created with gifts from donors, the center is specifically for UF’s 550 student-athletes — with emphasis squarely on the “student” side. Tutors replace coaches. Practice drills are benched for study sessions, game plans swapped for academic advising.

“We want our student-athletes to be champions on the field, court and in the pool and in their lives and professions after graduation,” then-UF President Bernie Machen said in 2014 when it was announced that the new academic complex would be front and center in the university’s Go Greater campaign. 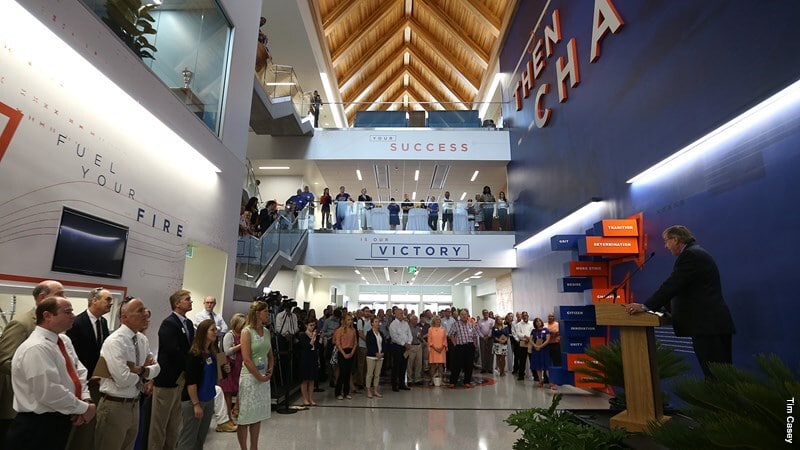 The Otis Hawkins Center at Farrior Hall was one of the earliest projects completed during UF’s Go Greater campaign.

“As an athletic program, we try to win championships,” Foley said at the time. “But nothing is more important than what we’re representing today. Absolutely nothing.”

The Otis Hawkins Center, named for one of the original Gators Boosters, was brand new the year Tori Bindi enrolled as a freshman swimmer.

“I was in the first class to go entirely through using the Hawkins Center and could not imagine my academic [and] athletic career without it,” she says. “The experience I had at [UF] changed my life, and I am so proud be a part of the Gator Nation.”

Outside the pool, the center became almost a second home to her.

“My absolute favorite thing was the third-floor study spaces,” she says. “As someone who was consistently studying in the Hawkins Center until close, I valued the safe and comfortable space of the tutor rooms and computer labs. If it wasn’t for the information technology staff I would not have been able to complete projects or papers when my computer crashed during my sophomore fall.” 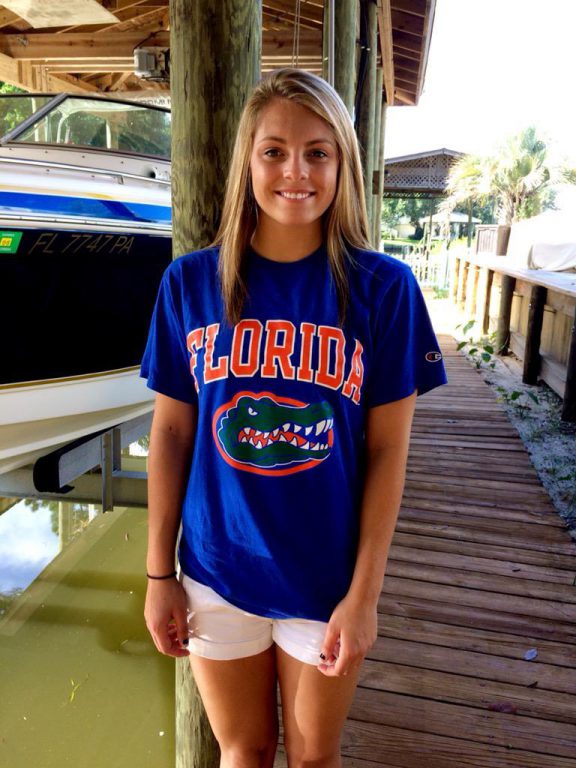 Former Gator swimmer Tori Bindi credits the Otis Hawkins Center for helping her be a star in the classroom as well as the pool.

Now, Bindi — spring 2020 graduation’s Outstanding Leader and president of the Student-Athlete Advisory Committee her senior year, while majoring in biochemistry — is making plans for medical school.

“The women’s swim team GPA for spring 2020 was the highest in history, and I believe that is because of the Hawkins Center staff’s commitment to the academic success of student-athletes,” she says. “The next chapter of my life will be medical school, and I believe that with the help of the Hawkins Center I am prepared for the most difficult of challenges.”

Bindi insists UF’s focus on the classroom, along with sports, sets the university apart from other schools.

“To the public, Florida is considered a successful athletic institution because year after year we bring home conference and national championships,” she explains. “However, I believe that Florida athletics is successful because it creates champions of life.”

We Are the Champions

NCAA and SEC championships are nothing new at the University of Florida. Gators have won national crowns in golf, swimming and diving, gymnastics, tennis, football, soccer, basketball, track and field, softball, and baseball. So many, UF is running out of space in campus trophy cases.

But UF’s student-athletes — “scholar-athletes” is more accurate — also shine in the classroom. Last year alone, 114 earned degrees and a record 339 made the SEC Academic Honor Roll. UF is the only school with at least 100 athletes on the conference’s honor roll each of the last 23 years. It was also the first to be named a Division I-A Athletic Directors’ Association “program of excellence.”

The University of Florida has long made academics a priority in its athletics program. Back as 1979, the university opened a tutoring center for its athletes, known as the Office of Student Life. In 1993, Steve Spurrier famously encouraged Michael Gilmore to skip football practice before that season’s biggest game, the SEC Championship, to meet with a Rhodes Scholars selection committee. A couple years later, in 1995, Farrior Hall opened as the academic services center for student-athletes — thanks to financial support from alumnus J. Rex Farrior Jr. and his wife Mary Lee. 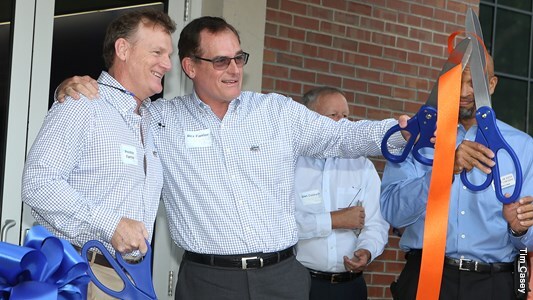 Brothers Preston and Rex Farrior, whose investments in UF’s student-athletes led to the renovation of Farrior Hall, where the Otis Hawkins Center is housed, took part in summer 2016’s grand opening ribbon-cutting ceremony.

“Our commitment to academics extends beyond our student athletes time at the University of Florida,” Athletic Director Scott Stricklin says. “While we offer academic advising, counseling, mentoring, community engagement and job placement services, we stay connected after they leave Gainesville. Our Forever Gators program provides continual career development, networking opportunities and for those who leave without their degree an opportunity to return and graduate.”

That commitment to academics rose to a whole new level during the first months of the university’s Go Greater campaign. Alumni and friends stepped forward once again to create a campus learning environment for scholar-athletes that’s tough to match in all of academia. Brothers J. Rex Farrior III and Preston Farrior contributed millions to their alma mater to renovate the building named for their parents. An anonymous alumnus gave $12.5 million more to honor Otis Hawkins and establish the academic center. Other Gators added gifts of various sizes to enhance the project.

When all was said and done, Gator athletes had a space of their own for tutoring, studying, academic advising, job placement and other services. The new Otis Hawkins Academic Achievement Center has 74 rooms for tutoring and studying, state-of-the-art computer labs and designated online testing space, a 125-seat classroom auditorium, a nutrition wing, 25 academic advising and staff offices, a conference room and wellness center.

Leading from the Heart