The Gator Nation mourns the loss of a towering figure and university visionary.
By David Finnerty
“Our university family lost a towering figure with Al’s passing. No one was more loyal, more spirited, more determined to do everything he could to lift his alma mater. UF is what it is today, in no small part, because of Al Warrington.” – UF President Kent Fuchs

Al Warrington would laugh when talking about the 10-cent apple butter sandwiches he ate in college. A single one, he’d say, would feed him for days when he was a University of Florida student.

In time, the man who cleaned fraternity bathrooms to pay for tuition and schoolbooks would go on to become one of the university’s most generous benefactors and the namesake for UF’s business college. Along the way, Warrington’s reputation as a no-nonsense, do-what-it-takes entrepreneur and UF guardian would make him a campus legend — so proud of his alma mater that his beach house in Galveston, Texas, was trimmed in orange and blue and the side facing the road painted with a large “UF” and “Go Gators.”

Warrington, 84, died of natural causes in late May.

“Our university family lost a towering figure with Al’s passing,” UF President Kent Fuchs said. “No one was more loyal, more spirited, more determined to do everything he could to lift his alma mater. UF is what it is today, in no small part, because of Al Warrington.”

His love for the university seemed limitless. Over the decades, Warrington (BSBA ’58) would shuttle to campus from one of his homes in Houston, Atlanta or Miami to recruit professors, meet with fellow UF trustees or serve on an assortment of advisory boards. Rather than wearing a coat and tie, he’d sometimes famously show up in an orange and blue tracksuit and take time to talk with students.

Each fall, Warrington would host tailgate parties before Gator football games. In the 1980s, he turned a dormant UF alumni club in Miami into a powerhouse of supporters. He was a former president for the UF Alumni Association and Gator Boosters and a member of the university’s Council of Advisors and UF Foundation Board of Directors. A room in one of his homes was set aside just for Gator memorabilia. 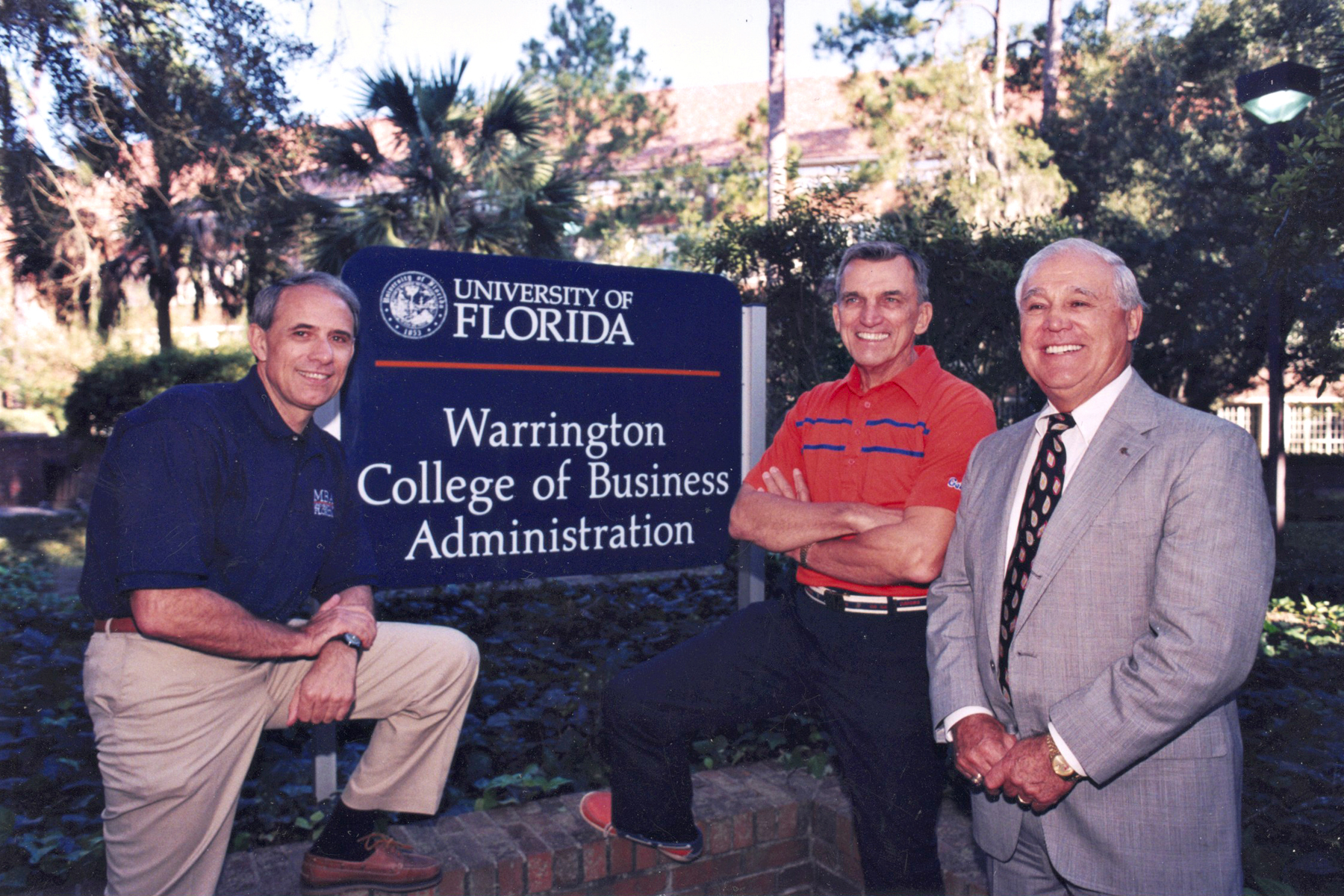 UF's business college was named in Al Warrington's honor in 1996 in recognition of his extraordinary generosity and leadership. Warrington (center, beside Dean John Kraft and former dean Robert Lanzillotti) received his accounting degree from UF in 1958.

“I think he bleeds orange out of his left leg and blue out of his right leg,” friend Fred Fisher (BSBA ’59), UF’s accounting school’s namesake, once said.

Wherever and whenever Warrington saw a need, he would be the first to open his wallet — whether it was to provide scholarships for first-generation students, upgrade sports facilities, improve the university’s libraries or support professors working in agricultural sciences.

But it was the business college that he most adored. Warrington’s leadership and philanthropy gave it new shape and purpose. A separate accounting school was created. Curricula evolved and programs were established. There was an aggressive push to attract the finest professors. And with those changes, the business college and its Fisher School of Accounting saw their national status climb.

Then, in 2014, Warrington moved his investments in UF to an even higher level. He became the university’s first $100 million donor. His $75 million bequest to kick off UF’s Go Greater campaign — added to his previous $28 million in contributions — was the capstone of his lifetime of service to the university.

“Al Warrington was our champion and our foundation,” said John Kraft, dean of the business college. “His continued leadership and generosity made it possible for the college to be recognized as one of the best business schools in the world. We are proud to carry on his legacy in name and in spirit.”

It was Warrington’s rise at the Arthur Andersen accounting firm and later his entrepreneurial success that put him in position to become one the university’s greatest philanthropists. Under his watch, Arthur Andersen’s Miami office became one of country’s largest accounting firms. But it was in “retirement” that he made his fortune. Even with 32 years as an accountant and executive under his belt, Warrington wasn’t quite ready to give up on work in 1990 when he founded the Houston-based environmental services company Sanifill — which, within a decade, would be absorbed into Waste Management Inc.’s giant conglomerate. Still not finished with his career, he went on to create the Atlanta-based health and beauty aids manufacturer House of Cheatham Inc. and several companies in Texas, including Frontier Waste and Houston Plating and Coating.

None of that, however, could keep him away from his beloved university.

“Al was a committed, caring and selfless member of our community. His personal journey and service inspired generations of our students, faculty, staff, alumni and friends,” said Tom Mitchell, UF’s vice president for Advancement. “Al was a true Gator great, giving generously of his time, talent and resources to advance the university he loved. He leaves an enormous legacy that challenges us all to go greater.”

His was an unlikely journey to Gainesville.

Warrington was 8 years old when he started delivering newspapers in suburban Philadelphia neighborhoods. It wasn’t uncommon for him to attend two or three schools a year because his parents moved so often. Warrington was a high school senior when his father, a used car salesman, finally settled in Fort Lauderdale. But instead of switching schools once again, he remained behind in New Jersey, living with a friend and working weekends in Atlantic City to cover his share of costs.

Rutgers University offered Warrington a small scholarship. He turned it down, though, when his father spent $75 to register his son at UF without Warrington’s knowledge. But it would be up to Warrington to put himself through the rest of school, his father told him.

With that, Warrington — the first in his family to go to college — became a Gator.

“My mother had never completed high school and my father had a high school degree, [and] thought that college was only for training doctors and dentists,” Warrington said several years ago. “Dad felt if you weren’t going to be one of those, you were wasting time and money.”

Warrington, however, never believed it to be a waste. Someone once asked him why he’d been so generous to the university.

His response: “Because I love the school.”

Warrington: Through the Years