They fell in love in a most unromantic spot – an early morning accounting class. But over 50 years later, this Gator couple remains committed to each other — and to UF.
By David Finnerty
“I grew up in Gainesville, so I was a Gator before I knew there was another college anywhere else in the world.” – Allen Lastinger

On quiet days the sounds of Century Tower’s chimes spill over the campus at UF’s P.K. Yonge Developmental Research School. Those bells, Gator football games and Homecoming parades are the noises of childhood for Allen Lastinger.

“I’ve been engaged with the University of Florida for as long as I can remember,” he says. “I grew up in Gainesville, so I was a Gator before I knew there was another college anywhere else in the world.”

It was no wonder, then, that the son of schoolteachers applied to the university when his elementary, junior and high school years at P.K. Yonge ended in 1960. The surprise, Allen (BSBA ’65, MBA ’71) jokes, is that he was accepted.

“When I went for my counseling session, the counselor looked at the scores on my entry examination and said, ‘Mr. Lastinger, only 10 percent of the people who score at your level graduate from the university,’” Allen recalls. “I’m a competitive guy, and that set the bar for me. I didn’t set the world on fire scholastically, but I did graduate.” 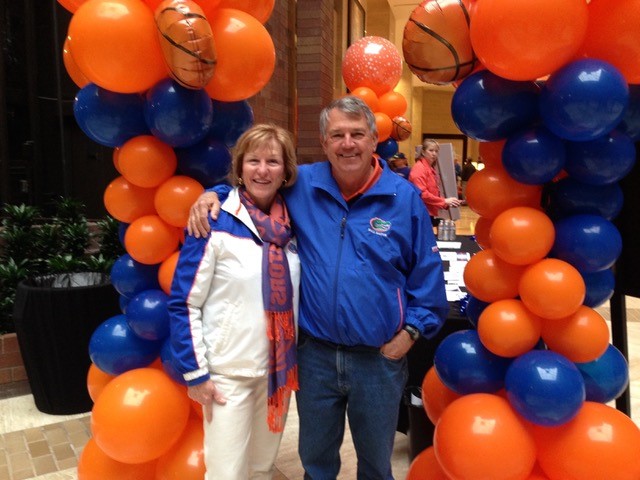 Delores Lastinger’s (BSE ’65) route to UF was much different. In school, she shined. Her grades at Edgewater High in Orlando were good enough that a local women’s group offered a small scholarship for her to go to Florida State University. But as she waited for the scholarship to arrive, FSU’s housing options disappeared.

So she turned to UF.

“Being a Gator changed the direction of my life,” Delores says. “I found all these wonderful courses that I loved. I met Allen. I got involved in campus activities such as Legislative Council and just saw a whole different world.”

All these years later, the Lastingers and UF are as intertwined as ever. Along the way, the St. Augustine couple has risen to the short list of the university’s greatest Gators.

The Boys (and Girls) from Old Florida

In the swirl of the early ’60s — freedom marches and JFK’s assassination, moonshots and ‘Beatlemania’ — the University of Florida was a calm in the storm.

“We were just doing our own thing back then,” Delores recalls. “There are a lot of great memories: dressing up in high-heel shoes and walking to football games from the ATO [Alpha Tau Omega] House in the heat, the parades, Gator Growl, all the things we used to do.”

In their junior year, Allen gave Delores his ATO pin as a pre-engagement promise. What happened next has become a favorite family story.

“I had on this wonderful Villager dress that I had just gotten out of layaway at Donigan’s, and the ATOs threw us in that awful, slimy pond by the architectural school. I was so worried about my beautiful dress,” she says. “I thought it was ruined.”

That dunking aside, for her, the University of Florida was an invitation to a life more fulfilling than she’d ever imaged. Instead of joining a sorority, she immersed herself in her studies, taking business and education classes.

“I decided to study business education because I really enjoyed the business courses. Except maybe accounting, which is where I first saw Allen at 7:30 in the morning … when he came [to class],” Delores says with a chuckle. “But when he did come, I thought he was really cute.”

“I didn’t know what I wanted to do,” he says. “I gravitated toward business because I had an interest in commerce and in finding a job, and the business school seemed to provide an opportunity for that.” 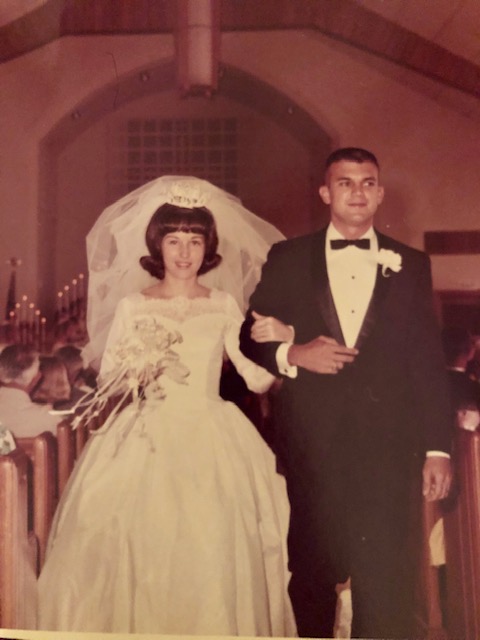 The Lastingers missed their undergraduate graduation ceremony to get ready for their wedding. They married one week later, on May 1, 1965.

Graduate school was the opposite. Fresh off a four-year stint as a naval officer after earning his bachelor’s degree, and determined to be a serious college student, Allen’s welcome to UF’s MBA program was academic probation — the consequences of a lackluster undergraduate performance. So while Delores taught school in nearby Newberry, Allen studied. The result: almost straight ‘A’s, a single ‘B’ the only tarnish.

“I was surprised I was so successful after my undergraduate record,” he admits.

The biggest surprises, however, were on the horizon.

One of his first jobs with the bank was to recommend new locations for branches. When he suggested Gainesville, five higher-ranking associates were asked to be the branch’s president. All five declined.

“So they came to me and said, ‘Lastinger, you picked this location, why don’t you run it?’”

And so he did.

Back in Hogtown, the Lastingers’ ties to their alma mater grew stronger. Right away, Allen became a member of the UF Foundation’s board of directors. Then its president and co-chair of the university’s It’s Performance that Counts campaign to close out the 1990s — all despite promotions and a move to Jacksonville, where Allen climbed to Barnett Bank Inc.’s (now Bank of America) president and chief operating officer. Delores, meanwhile, taught high school business education classes in both cities.

It was during It’s Performance that Counts that the Lastingers created one of their most enduring legacies: a center designed to support teachers and strengthen public education. The Lastinger Center for Learning in the College of Education is a national model now, known for developing programs that are transforming classrooms. Algebra Nation and Math Nation, for instance, are helping students and teachers rethink mathematics. Early Learning Florida is serving 55,000 educators. The Teacher Leadership for School Improvement is guiding the next generations of teachers, counselors and school administrators.

“We were trying to put together a program that would help underserved students perform better,” Delores explains of the center’s conception. “I feel so great about the investment we’ve made because it’s changed how education is being delivered and has taken teachers out of silos. I’m really excited about that.”

Doing something for teachers and children is personal for the Lastingers.

“My mom and dad were educators. My two sisters are educators. Delores is an educator,” Allen says. “Because of our deep family history and our desire to give economically deprived students an opportunity to get an education and improve their lives, [the College of Education] was the logical place for us to make the commitment.”

But the Lastingers, now retired, wanted to do more. A string of UF programs benefit from their generosity — the business college, Machen Florida Opportunity Scholars, Gator Athletics, the Florida Museum of Natural History, the Whitney Laboratory for Marine Biology, UF Health, and historic St. Augustine among them.

Over the years, too, Allen and Delores — each a Distinguished Alumnus and together winners of the university’s Lifetime Volunteer Award — have been willing leaders whenever called. An assortment of university initiatives and priorities are the beneficiaries of that leadership: UF Historic St. Augustine, Gator Boosters, P.K. Yonge, Warrington College of Business, UFF National Board, UF Health Shands Hospital and others.

“I’m one of those first-generation college people,” Delores says. “For me, education changed my life, and Allen I both want that for other young people. So we keep giving back to the university because we love it there. We enjoy being Gators; it enhances our lives.”

This past spring, the Lastingers received gestures of gratitude from UF and the city of St. Augustine. Allen was honored as the university’s Bob Graham Center Citizen of the Year. St. Augustine officials presented the couple with one of the city’s most prestigious recognitions, the Adelaide Sanchez Award for Historic Preservation, Restoration, Education and Interpretation.

While the Lastingers appreciate the recognition, others are equally deserving of the awards, the Lastingers insist. Civic service and philanthropy, in their minds, go back to values passed down from Allen’s parents — “character and integrity, an honest life,” Allen says.

“As we get older things come more into focus about what society needs, what communities need, what people need,” he says. “It would be a waste for us to have the time and the resources to not try to improve on those things.

“We want to stay as active as we can for as long as we can, but we recognize that at some point we’re not going to be able to do that,” he adds. “So we’re in a hurry now.”

The Lastingers have been leaders in UF’s preservation efforts in St. Augustine. Here, they share their favorite sites in America’s oldest city: