For Jane Sun, UF was an early stop on her way to helming Asia’s largest online travel agency
By Liesl O'Dell
“People at UF are dynamic and open-minded. Professors are among the most kind, thoughtful intellectuals in the world.” – Jane Sun

Every dollar of your gift to Aid-A-Gator helps support a UF student from providing meals to textbooks to helping with unexpected medical expenses.

From her perch atop the global travel industry, Jane Sun (BSAC ’92), CEO of CTrip, Asia’s largest online travel agency, connects people with the best destinations the world has to offer. She even quotes Confucius when explaining how cultural experiences can bridge divides, strengthen industries and create peace.

Sun should know. She is a living, breathing advertisement for how travel can change a life. But her journey was much longer and more difficult than her recent climb to the top of Mount Kilimanjaro or her completion of the Shanghai marathon.

She was lucky, however. As a young Chinese student she was able to connect with Gators, which is what she says changed her life. 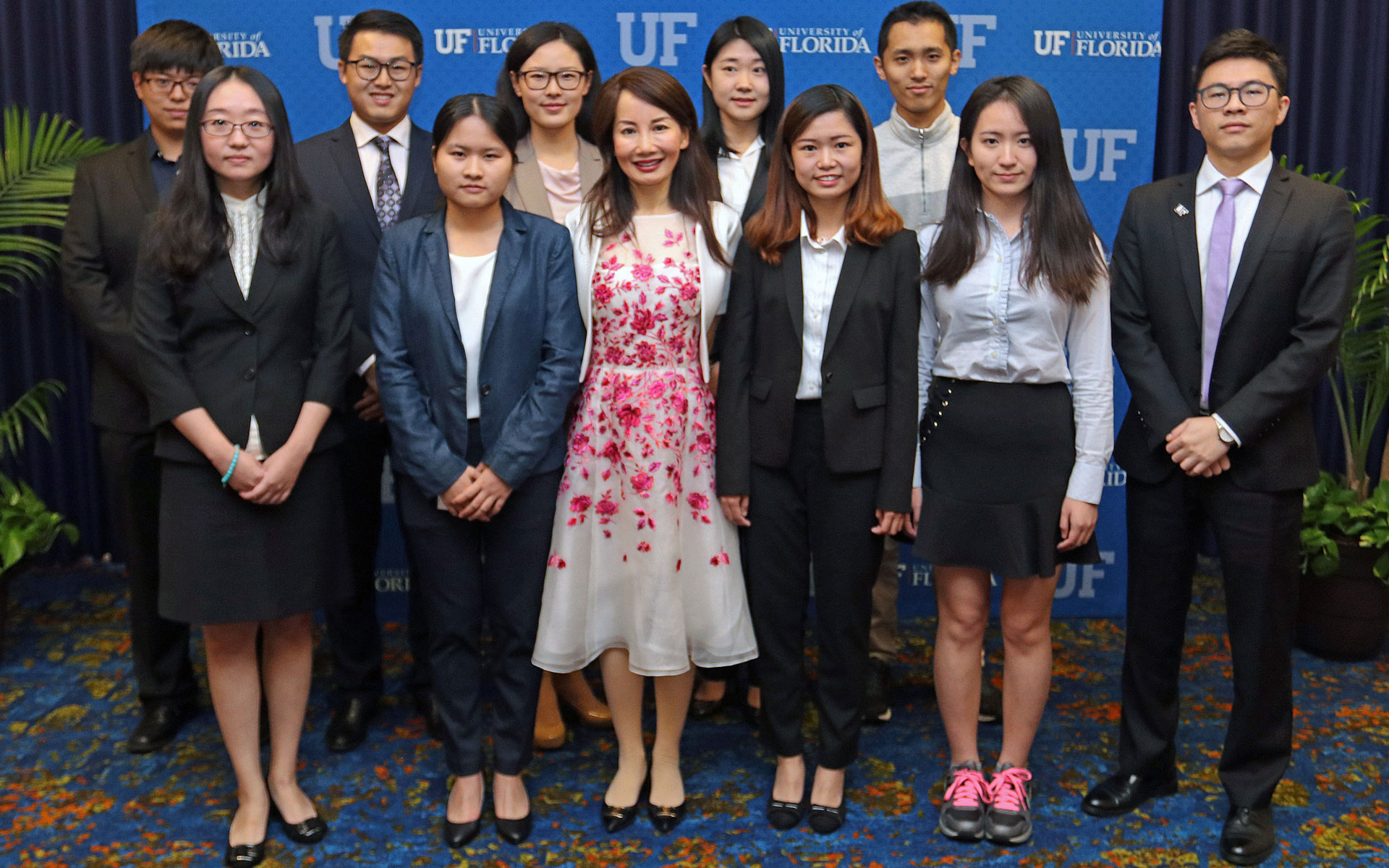 Gator Jane Sun, center, has been featured twice on the cover of Forbes and lauded by Fortune as one of the Top 50 Businesswomen in the World.

In 1989 while attending Peking University in Beijing, Sun was invited by visiting Levin College of Law Professor Joe Little to attend the Introduction to American Law program at the University of Florida. UF law professor Fletcher Baldwin and his wife, Nancy Baldwin (EdD ’63, JD ’93), directed the program and offered a spare room in their home to Sun.

“She became one of our own children,” says Nancy Baldwin. Sun, for her part, still calls Nancy “my American mother.”

Each night over dinner, the Baldwins talked about law, globalization, the U.S. Constitution and the Founding Fathers’ ideals.

“I learned a lot from my experience in the USA,” says Sun, who ultimately enrolled in UF’s accounting program. “I have a great appreciation for the people there.”

Compared to her fellow students, Sun’s pace was intense. She bicycled six miles to campus each morning, taking the earliest classes available so she could spend the remainder of the day, and Saturdays, working to pay her tuition. She left Sundays for her studies.

Nonetheless, Sun recalls her UF days fondly — Gator football games in the Swamp, the pageantry of Homecoming weekend, Lake Alice, the bat house and working in the law library.

Her favorite recollections, however, are of the many conversations she had with her business and law professors.

“People at UF are dynamic and open-minded,” Sun says. “Professors are among the most kind, thoughtful intellectuals in the world.”

Sun says many discussions she had at UF still influence her leadership style today. In particular, she developed an appreciation for hearing other viewpoints.

“I try to put myself in other people’s shoes,” Sun says. “In order to penetrate in a global market, you have to have a very good understanding of different peoples and their motivations, and different cultures.”

Before her graduation from UF in 1992, Sun, following the Chinese tradition of filial piety, told the Baldwins that she wanted to one day take care of them. Touched by her gesture, the Baldwins assured her they were prepared for retirement and suggested that instead she pass on their goodwill to other students who need a helping hand.

Twenty-four years later, when Sun was COO of CTrip, she surprised her American family with the announcement that she had established a scholarship named after Baldwin and Little to fund law and business scholarships for students from China who wanted to study at UF. Her 2016 gift also supports UF student externships in China.

And she believes it is her duty to help. Citing the adage “to whom much is given, much is expected,” Sun says she feels obligated to help the next generation prepare for their place in global industry.

Beyond funding scholarships, Sun shares her Gator pride by collaborating with UF leaders to increase the university’s presence in China and meeting with UF students in Gainesville and Shanghai as often as possible. When students ask for advice, her tips include, “be open-minded,” “give 100 percent effort to whatever you want to accomplish,” “love the world” and “love your life.”

From Student to Executive

Sun went to work as an accountant in KPMG’s Miami and San Jose, California, offices. She then worked for Applied Materials, a tech supplier in nearby Santa Clara.

In San Jose, Sun met and married Silicon Valley techie John Wu, a Shanghai, China, native. Wu, a University of Michigan alumnus who became the chief architect of Yahoo!’s search engine, went on to serve as CTO for China’s largest online commerce company, Alibaba. Today, he runs his own private investment company. They have two daughters, one named after Nancy Baldwin.

By the early 2000s, Sun and Wu were doing well financially. Still, she couldn’t pass up the opportunity in 2005 to become the youngest female CFO in CTrip history.

Of course, Sun has already taken her daughters on numerous trips, following the wisdom of her favorite Confucius quote: “It is always better to travel 10,000 miles than to read 10,000 books.”

Over the next 13 years, Sun’s efforts to strengthen CTrip’s travel services led to her promotions to COO and later president and CEO of what is now a $25 billion company.

“Every step has built on the role before it,” Sun says. “I am very proud of how our team has grown.”

Of all her accomplishments, Sun says she is proud of CTrip’s multiple appearances in the Gator 100, UF’s list of the top Gator-owned or Gator-led businesses. She says she is also proud of her Gator football team, whose games are televised around midnight in China.

“We are the only Chinese people we know who enjoy watching football,” Sun says.

As for her future endeavors, Sun is preparing for the day when virtual reality, augmented reality, advanced vehicles and even space travel will change the travel industry.

“Coming to UF will be much faster from China in the future,” she predicts.

One thing that won’t change: the power of travel to build bridges.

“We become a better person when we explore,” Sun says. “Meeting different people from different places is good for everyone.”

Every dollar of your gift to Aid-A-Gator helps support a UF student from providing meals to textbooks to helping with unexpected medical expenses.