From pool halls and Marine barracks to the Ivy League and the C‑suite, Tom Johnson’s life has taken surprising turns. But he’s never forgotten his roots
By David Finnerty
“I’ve been a Gator my whole life. It’s been a lifelong love, but it’s all based on the fact that I got as good an education there as anybody in the nation.” – Tom Johnson

Give to this fund now

Tom Johnson owes his career to a pool stick.

Dade City, in the ’60s, was a booming agriculture community, home to the world’s largest citrus processing plant. There, in the blistering watermelon fields, Johnson spent high school summers loading melons into trucks for a farmworker’s wage and the other seasons laboring in orange groves and on ranches.

It’s also there that Johnson would hang out in the town’s pool hall, where the local bankers, businessmen and postmaster — all wearing their nice dress pants and white shirts — would stop in for lunch and a game or two of eight ball. 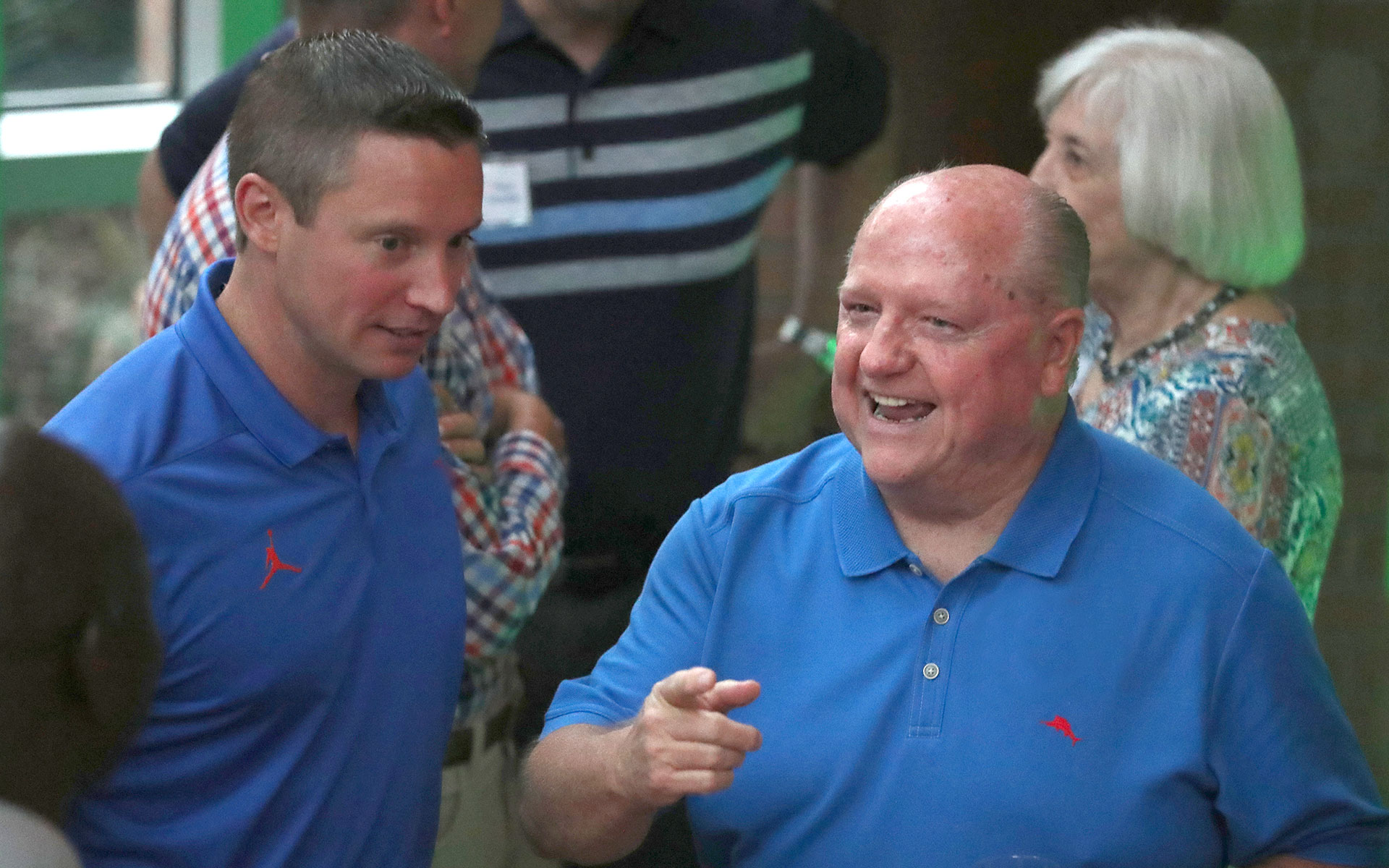 Tom Johnson (right, with Gators basketball coach Mike White) is one of the philanthropists behind the renovated Stephen C. O'Connell Center.

“Here I am, coming from my poor background — we didn’t even have running water at my house until I was 14, no plumbing at all — and I’m thinking, ‘I like the way the bankers dress. I want that job,’” Johnson (BSBA ’72) says.

“The pool hall is where I first became interested in business.”

A University of Florida degree and five decades later, Johnson is one of the most successful and generous entrepreneurs in Pasco County’s history. And Dade City, where the annual Kumquat Festival and county fair are must-dos, is still his home.

Once, Twice a Gator

Johnson blew his first chance at UF. Flat-out flunked out. That was in the thick of the Vietnam War, and Johnson was straight out of high school when he enrolled to learn to be an engineer. Because, well, that’s what his teachers told him to do. But he had no interest, he says, “no direction and no money.”

So, just as two of his older brothers had done, he enlisted in the Marine Corps. It was a good decision, Johnson says. Two years later, after injuring a knee in a pick-up football game, remaining stateside and unable to re-up, he was ready to give college another shot.

“The Marine Corps gave me a level of maturity and stick-to-itiveness that I didn’t have. It led me to being a much more disciplined and responsible person,” he says.

That new attitude and gumption, along with the strength of his now 52-year marriage to his high school sweetheart, Jane, has served Johnson well throughout the better part of his life — starting almost the moment his stint as a Marine ended.

With the Corps behind him, Johnson breezed through St. Petersburg Junior College and, with Jane and their toddler son at his side, re-enrolled at UF. This time, to become a businessman. A part-time job as a hotel receptionist on the graveyard shift (earning $1.25 an hour) and extra cash hustling pool put enough groceries in the cupboard for the Johnsons to be content in their little mobile home. His G.I. Bill and Jane’s job as an office secretary filled the gaps.

“I had an immediate love for the business school and the business courses,” Johnson says. “All my memories of the university are fond ones: football games when you had to wear long-sleeve shirts; sitting in class in Matherly Hall, sweating because there was no air-conditioning and the windows were open; loving the subject matter.”

The Johnsons’ second son was born at UF Health Shands Hospital. And in those business classes Johnson graduated with honors and consumed knowledge that would later turn him into a rising star in Georgia’s banking circles and, eventually, win him a seat in Harvard University’s celebrated MBA program.

“The importance of the University of Florida to me is more important than Harvard,” Johnson says. “I found out pretty quickly competing with all those Ivy League, gold-spoon kind of people that a University of Florida education is just as good. I don’t care if you’re from Brown, Princeton, Harvard, all those elite, supposedly intellectual schools.”

Hundred-pound feed sacks were re-fashioned into dresses, shirts and sweaters in the Johnson home when Tom, the youngest of six children, was growing up. He was 2 when his father drowned while having a heart attack on a fishing outing. There was little money to run the family’s small farm. Cardboard patched holes in shoes; jeans handed down from older siblings were rolled up at the ankles.

“I was an athlete and had good eye-hand coordination, so I picked up the game pretty easily,” Johnson recalls. “I remember one day looking down at the end of the pool hall and noticing these guys were playing for money, and I thought, ‘Heck, I’m better than they are.’ I made a lot of spare money in high school shooting pool.”

Though he didn’t realize it at the time, an entrepreneurial spirit had been awakened. But it would take getting fired from a high-paying job years later for him to fully unleash it.

Promotions came quickly for Johnson. By the late 1980s, he’d soared up the chain-of-command to be vice president and chief operating officer for the document management systems giant IKON Office Solutions (now Ricoh), headquartered in Pennsylvania. But he and Jane missed Dade City. So in 1989 he accepted an offer to be COO and vice president for Danka Imaging in St. Petersburg. The job didn’t last long. It soon became clear that he and Danka’s brass were a bad fit. A frustrating year and too many disagreements later, Johnson was let go.

“I was a reluctant entrepreneur — kind of got into it kicking and screaming,” Johnson says. “I was forced into it when I got fired.”

Over the years, Johnson’s knack for turning under-preforming companies into profitable ones had made other people rich. Once on his own, he used those same talents again, first as a consultant, and then, in 1994, to launch Global Imaging Systems.

A blink later, in 2007, Forbes Magazine named his $1.3 billion-a-year business one of the 400 Best Big Companies in America. It was a testament to what the clients he’d advised earlier in his career had been telling him all along: that he had the talent and knowledge to make a fortune in a company of his own. That same year, Johnson sold Global Imaging Systems to Xerox Corp. for $1.8 billion and retired. This November, the imaging industry will honor Johnson with its Lifetime Achievement Award in recognition of the benchmark model he created to evaluate acquisitions and improve operations.

“My life has been like a four-legged stool that made me able to succeed,” Johnson says. “In the Marine Corps I learned discipline and leadership. Jane brought me love and comfort and all the things that go along with having a life partner. The University of Florida opened doors for me. Harvard is the fourth leg.”

He and Jane don’t need much, Johnson says. Their 500-acre farm is more than comfortable. A financial “safety net” is in place for their four sons and grandchildren.

So the Johnsons give away about half their wealth, most of it anonymously. Tampa’s Metropolitan Ministries, where down-on-their-luck families can receive a helping hand, is one of their favorite charities. But the Johnsons contribute to an array of causes. Churches, hog pens for the fair, a center for abused women, a Little League team’s travel, back-to-school programs — it’s not unusual for the couple to hear of a need or read about one in the newspaper and write a $5,000, $10,000 or $50,000 check. Each year at the fair, for instance, Johnson buys five or six steers that were raised by students in Future Farmers of America and donates the cattle back to FFA to be auctioned. When the daughter a Dade City preacher was killed in a car accident, the Johnsons set up a fund to care for her children.

“It doesn’t hurt us at all to do those things. We still have all the money we’ll ever need,” says Johnson, a UF alumnus of distinction in 2007.

The University of Florida is one of the biggest beneficiaries of the Johnsons’ generosity. The couple was instrumental in establishing the university’s Entrepreneurship and Innovation Center along with a master’s program in entrepreneurship, which is named in Johnson’s honor. So too are the head football coach’s office and the Stephen C. O’Connell Center’s atrium, both in recognition of the couple’s help renovating those places. In addition, the Thomas S. and Jane Johnson Athletic Endowments provides scholarships, and a professorship in sports medicine, the Samuel P. Harn Museum of Art and other campus initiatives have also been enhanced thanks of them.

“A mentor told me once that we should learn, earn and return. I took that to heart,” Johnson says. “I’ve been a Gator my whole life. It’s been a lifelong love, but it’s all based on the fact that I got as good an education there as anybody in the nation.”

Nowadays, as Johnson reflects on his career and life, he’s astonished with how things turned out.

And it all started with a pool stick.

Give to this fund now

Your Ideas – Generating Ideas that will Change Tomorrow

Your Leadership – Leading Those Who Lead the Way