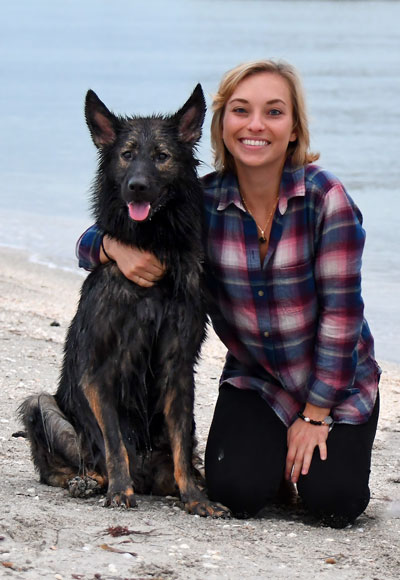 Alexandra Marie Lebovic was a student at the University of Florida College of Veterinary Medicine when she passed away in 2019 at age 23 from Ewing’s Sarcoma. She had a passion for life that included travel, learning, adventure and animals. Her lifelong dream was to become a veterinarian. In her memory, her family has created this scholarship so others might have the opportunities she was denied and that her name will remain associated with the profession she dreamed of joining.

Upon graduation from Patterson Mill, Alex was accepted into the Animal Science program at the University of Maryland in College Park. She enjoyed an active academic and social life as a member of the Dean’s List, Primannum Honor Society, Terps for Animal Welfare and the Delta Delta Delta sorority. She also worked at Hyattsville Animal Hospital to gain experience for her veterinary career.

As a junior at University of Maryland, Alex was diagnosed with Ewing’s Sarcoma – a rare form of cancer that affects bones and soft tissue. In Alex’s case, the main tumor site was her left femur. There was also a small nodule in her left lung. In the middle of her junior year, she was told, “You have metastatic Ewing’s Sarcoma. The five-year survival rate is 30 percent.”

She was declared cancer-free in the fall of her senior year. She returned to work at Hyattsville Animal Hospital, worked as a research assistant for one of her professors, interned at the National Institute of Health, completed her studies and graduated with her classmates in May of 2017.

Because of her illness, Alex missed the application deadline to start veterinary school in the fall of 2017. She identified her top choice as University of Florida and moved with Dakota to St. Petersburg in August to establish Florida residency for 2018. Alex spent the year enjoying everything Florida had to offer and working as a veterinary nurse at Northeast Animal Hospital in St. Petersburg. She was accepted into the University of Florida College of Veterinary Medicine’s Class of 2022 in May of 2018.

Just weeks before Alex was to start vet school, her cancer recurred. She was encouraged by her family and her doctors to put off vet school and focus on cancer treatment, but she insisted on moving forward. She finished 18th in her class at UFCVM that fall in spite of starting chemotherapy two weeks before the semester, taking a two-week break to have a tumor the size of a grapefruit removed from her leg, enduring radiation treatments for the second half of the semester and, before her last exams, being hospitalized for a week because she was in so much pain all she could do was lie in bed and cry. Two days after taking her last exam, she returned to Maryland where the doctors at Hopkins told her she would lose her battle.

Alex was a remarkable young woman – kind, compassionate, smart, determined, adventurous and beautiful. She was taken from this world too soon. Her family is determined that her name and spirit will live on as part of the profession Alex loved.