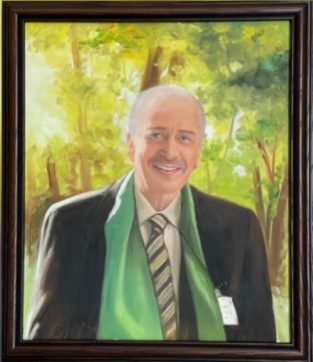 The Sameer Abu-Rustum Education Fund was created in loving memory of Dr. Sameer E. Abu-Rustum. It was established by University of Florida graduates Bruce Schafer, who earned a master of science in civil engineering in 1991, and his wife, Rana Ayoub Schafer, a triple-Gator with a bachelor’s and master’s in computer and information science, as well as a master of education in computer and information science, in 1986, 1988 and 1991. This fund is dedicated to honor Dr. Abu-Rustum’s lifelong commitment to quality education, exceptional service to his community, and his dedication to supporting the trainees in OB/GYN in general, and maternal-fetal medicine in particular, working to improve maternal and child health.

Dr. Abu-Rustum was born and raised in Tripoli, Lebanon, and spent a lifetime dedicated to education and clinical service. He completed his medical education and residency training in obstetrics and gynecology at the American University of Beirut in 1966. An exemplary physician from his early years, he was elected into the Alpha Omega Alpha medical honor society. He was also a distinguished surgeon and was accepted for a fellowship in gynecologic surgery at the Lahey Clinic in Boston under the directorship of Dr. Edward Copenhaver, his lifelong mentor and friend.

Always loyal and dedicated to his beloved Lebanon, and particularly the city of Tripoli, he returned to commence a 47-year career where his reputation was that of a most skilled surgeon, humane healer, and philanthropic and gifted teacher. Dr. Abu-Rustum was the first to bring obstetric and gynecologic ultrasound services to Lebanon and, some 30 years later, the first three-dimensional ultrasound equipment in the Middle East. Though he was in private practice, training under him was recognized as equivalent to a “residency training” by the Lebanese Order of Physicians, granting his trainees the permission to practice as specialists in obstetrics and gynecology.

At the height of the Lebanese Civil War, Dr. Abu-Rustum moved to the United States, where he joined the faculty at the University of Miami from 1988 to 1993 and was the recipient of the departmental “Best Teacher Award” from his residents all five years.

His final 21 years of practice were back in Lebanon, where he established the highest regarded maternity unit in the country. He served patients from all walks of life equally and compassionately and always provided gratuity clinical service for those with limited means.

Dr. Abu-Rustum retired shortly after celebrating his 50th reunion with the American University of Beirut Medical Class of 1963 and spent his last years with his wife of 55 years, Lina; their children, Reem (UF ‘90, ‘93 and ‘97) and Mira (UM ‘93); with their spouses Kamil (UF ‘90) and Zaher; and five grandchildren, Maria (UF ‘20), Karim, Cynthia, Karina, and Sameer Jr.