Courtesy of Ken and Linda McGurn

Ken and Linda McGurn visited a penguin colony in Antarctica in 2005, and left with a deeper understanding of the the impact humans are having on the environment.

As patrons of UF as well as the city surrounding it, Ken and Linda McGurn have connected town and gown for decades. Their legacy of mixing business with conservation, though, will live far beyond Gainesville.

It started with a dead Australian. Or, more precisely, his garden.

It’s not that Ken and Linda McGurn were looking for an awakening when they visited Australia that fall 30-some years ago … and certainly not from the ghost of an Aussie aristocrat. But when the McGurns toured the “stunning” urban botanical garden created long ago on the man’s estate when he died, the couple found themselves wanting to do more with their own lives.

And now, all these years later, is there ever.

Downtown Gainesville, for starters — UF’s hometown was slowly disappearing in the 1970s when the McGurns began turning unwanted buildings into office suites, restaurants and stores. Now, the city is practically sprouting apartments and new businesses. There are also street festivals and Friday night concerts, coffee shops and nightclubs, high-tech incubators for aspiring entrepreneurs and waiting lines at popular eateries.

We won’t be here 100 years from now but the university will. That’s why it’s important to make sure the university is strong, so that it educates people in the coming years and keeps that legacy going forward.

Without the McGurns, that revitalization would have been little more than a pipedream. The couple bought, built and renovated until Gainesville’s downtown became a hotspot to work and the place to be on weekends and evenings.

“When we started, if you came down here after 5 o’clock there’d be nobody. There’d be no cars and no people,” Ken (BSBA ’72, MA ’73, Ph.D. ’81) recalls. “That has completely changed. We look at downtown as a legacy. It’s something that has made a difference.”

There are other legacies, too: the startup companies the McGurns have funded and mentored, for instance. They’ve also supported local entrepreneurs, veterans, first-generation college students, children’s recreation, even Mother Nature herself — all beneficiaries of programs the couple champion.

Their greatest mark, however, is arguably the one the McGurns are making through the University of Florida. This year’s Go Greater campaign co-directors are two of UF’s fiercest advocates.

The Soldier and the Tar Heel

Vietnam interrupted Ken’s academics. At 16 he was already in college with an eye on the University of Florida. Just three years later, at 19, the war replaced schoolbooks and classmates. He was a natural leader. It wasn’t long before the former Eagle Scout was promoted to sergeant, then lieutenant, then to the youngest captain in the military to command a spy plane in Europe.

But in 1970, seven years after enlisting, Ken was ready to move on from jumping out of “perfectly good airplanes” with the Special Forces. He opted out of a solid career in the Army to come to the University of Florida — and soon afterward, into a life with Linda, a union that’s lasted almost 50 years so far. It was a blind date that brought the McGurns together: she the Carolina Tar Heel, he the Gator in waiting.

“I joke that we met in spy school,” Ken says. “Her brother-in-law was teaching me ‘breaking-and-entering.’ He set me up with Linda. A few weeks later we were engaged to be married.”

Says Linda, with a laugh: “I gave up a scholarship at the University of North Carolina to come to Florida and marry Ken. That was a difficult decision.”

It turned out to be a good one. “About 15 years ago I was looking around, thinking about this university and how lucky I am to be a Florida Gator instead of a Carolina Tar Heel,” she says. “It hit me how beautiful our campus is and what a great education I received at UF.” 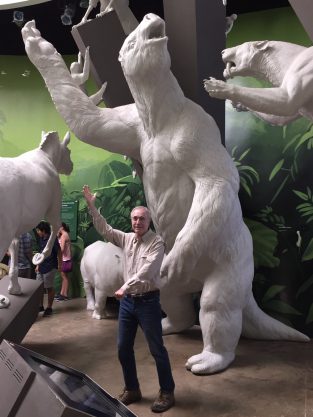 In Panama with UF’s Florida Museum of Natural History, Ken McGurn joined a giant sloth in doing the “Chomp.” (Photo courtesy of Ken and Linda McGurn)

Ken, on the other hand, knew from the beginning that he was fortunate to attend the university. As a kid in the late 1940s and early ’50s he lived in UF’s Flavet (Florida Veterans) Village — the old World War II Army barracks used for married students — while his ex-Army Air Corps father earned an engineering degree.

“My expectation was always to go to the University of Florida,” Ken says.

The newlyweds moved into a trailer near the corner of Archer Road and 34th Street. To get by, Linda kept books and did tax returns for people in town, and Ken sold real estate while he used his G.I. Bill to take 20 credit hours a quarter. When sellers offered financing, the McGurns purchased homes, starting their decades-long investment in Gainesville.

In the meantime, both McGurns earned bachelor’s degrees in business, and Ken a master’s to boot. When Linda decided to add a law degree, Ken stayed busy by earning a Ph.D. in real estate and urban analysis.

“I had a long way to catch up with my peers because of those seven years in the Army,” Ken says. “I was running hard to catch up. Linda and I both worked hard. That’s how you get ahead: a good education and working hard.”

By the time Ken collected his third UF degree, the McGurns were too entrenched in Gainesville to leave.

“We went to school a long time,” Linda says. “Then we stayed. We fell in love with the town.”

Jokes Ken: “We stayed because we had lots of student loans and not enough money to move.”

Together, the McGurns built one of North Central Florida’s most successful real estate companies. (“In the beginning, Linda did the plumbing and I did the painting,” Ken quips.)

While in college the couple bought properties no one else wanted, after graduation their interests and investments grew into historical preservation, mixed-use buildings, job creation, green energy and conservation.

It became impossible to think about downtown Gainesville’s rebirth without the former soldier and the one-time bookkeeper. The McGurns built and owned apartments and condominiums, stores and commercial offices, a garage and parking lots. More than 60 awards and recognition piled up as the couple combined business with their desire to “do the right thing.” Gov. Jeb Bush presented the Sustainable Florida Initiative Award; the Gainesville Sun named the McGurns to its list of “50 People Who Made a Difference in North Central Florida over the Last Century”; the University of Florida honored them with UF’s Distinguished Alumnus and Lifetime Volunteers awards.

And in the process, downtown Gainesville bounced back.

“When we were younger, downtown was like our child,” Linda says. “We nurtured it and helped it grow. If something bad happened, we thought, ‘Oh, this is terrible, we have to do something.’ People are proud of the downtown now, and we’re proud to help keep the heart of the city alive.”

There’s a photograph of Ken and Linda in Antarctica in 2005. Their red parka hoods are pulled over their heads, a small iceberg floats behind them, penguins wobble near their feet.

The McGurns saw firsthand the loss of icecaps and its effect on penguins and the rest of nature. Mankind’s impact on the environment was brought home for them when a researcher pointed out that the icecap had moved a quarter mile farther from the coast in just four years.

“We want to leave the world better place,” Ken says. “We’re just trying to do the least amount of harm that we can and encourage other people to recognize the issues.”

That desire is rooted in smart business decisions. 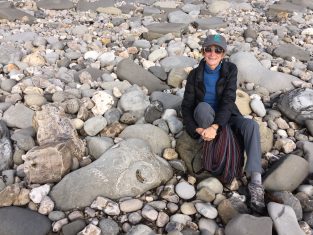 New construction included small changes, too, which eventually led to solar-powered lights in 1992 and later to solar energy. In 2008, the McGurns installed their first solar voltaic system — which now generates about 2 megawatts of power.

“We were saving electricity and reducing costs at the same time,” Ken says. “It became a ‘Why-not-do-it?’ As we kept getting more efficient with recycling, with electricity and with our building designs, we became more competitive. We spoke to other builders and showed them conservation was not only good for the environment, it’s good for the bottom line. We got involved very early in conservation because it made good business sense.”

The “right thing” didn’t stop there. The McGurns serve on dozens of volunteer boards, generously giving their time and dollars to support many organizations, such as Planned Parenthood, Alachua County Conservation Trust, United Way of North Central Florida, the YMCA, Hippodrome State Theatre and Chamber of Commerce.

At UF, they’ve invested in up-and-coming entrepreneurs through the College of Business and downtown Innovation Square; in the environment through the Florida Museum of Natural History; and in veterans and Machen Florida Opportunity Scholars. They’ve also given to UF Performing Arts, the Harn Museum of Art and Smathers Libraries. And individual colleges – Law, Journalism and Communications, Liberal Arts and Sciences, Medicine, Fine Arts, and Design, Construction and Planning – have benefitted from their generosity.

There’s a good reason for all of that support, Ken insists.