A 2012 UF telecommunications grad, Filipe DeAndrade won a 2015 National Geographic filmmaking competition, leading to the launch of his own Nat Geo show in 2017. Animals helped save him from an abusive childhood, DeAndrade says; he hopes his work will inspire viewers to take action to save wild habitats.

This Nat Geo star overcame a difficult childhood, and he credits animals with saving his life. Now he wants to return the favor.

“That is the aftermath of a mountain lion right there,” he whispers, his dark eyes scanning the horizon. “My heart is racing right now. We are definitely in cat country.”

Thirty seconds later, he and his crew stumble upon the rest of the fresh deer carcass. They quickly set up trap cameras and hightail it out before the hungry female lion returns.

Nature was my teacher. There is no track in school or even in the real world for becoming a wildlife photographer. You learn by being thrown in the fire and making mistakes.

By the video’s end, the team will have secured their prize: rare nighttime shots of a mountain lion family sharing a catch, plus footage of coyotes, red tail hawks and other animals benefiting from the mother lion’s determination to feed her two cubs – evidence, the host says, of how “apex predators keep the balance in their natural habitat.”

“She’s beautiful,” he enthuses, “a survivor.”

The mustachioed man chasing down big cats and endangered species is Brazilian-born, Cleveland-raised, UF-educated Filipe DeAndrade (BSTEL ’12). Hailed as “America’s answer to Steve Irwin,” DeAndrade has channeled his outsized passion for wildlife into a career as an award-winning filmmaker.

In the five years since he won National Geographic’s Wild to Inspire film competition in 2015, DeAndrade has gotten up close with sharks, humpback whales, jaguars and dozens of other critters for “Untamed with Filipe Andrade,” his renowned Nat Geo Wild digital series.

“If there’s one way I can make my mark in this world, it’s by encouraging viewers to get out in nature,” DeAndrade said in a recent interview. “People need to have those experiences themselves to care about wildlife and to take action.

“When you fall in love with something, you fight to protect it.”

Giving Voice to the Voiceless

DeAndrade’s other passion is the Gator Nation, and many episodes of “Untamed” find him proudly sporting a well-worn Gator bandana.

But his path to UF was fraught with dangers that at times threatened to swallow him whole.

Born in Brazil in 1986 and raised in the favelas of Rio de Janeiro, DeAndrade spent his early years dodging the blows of his violent, drug-addicted father, who beat Filipe, his mother and his younger sister, Lua. For comfort, Filipe fled to the rainforest surrounding the city. 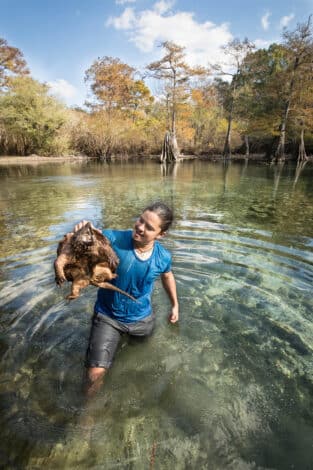 While filming on the Suwanee River for “Untamed,” DeAndrade documented alligator snapping turtles, known as “the dinosaurs of the turtle world.” These prehistoric-looking creatures have a spiked shell, beaklike jaws and thick, scaled tail; grown males can weigh up to 200 pounds each. Photo © Brian Moghari

“The outdoors, and seeing the animals, really gave me salvation,” he told National Geographic in March 2017

When he was 5, the family immigrated to the United States, settling in Cleveland, Ohio. His father abandoned them one year later, leaving Filipe’s mother to support the two children on her own. The resilient parent worked “sunrise to sundown” for minimum wage, he says, leaving Filipe to look after Lua.

Be independent, his mother stressed. Figure things out. Teach yourself.

At an early age, he picked up a Polaroid camera and fell in love. He was also drawn to wildlife documentaries, especially those about his favorite animal, the jaguar.

“They’re such solitary creatures,” says DeAndrade, “so intelligent and self-reliant. Those were traits I appreciated and aspired to.”

Awareness of his family’s illegal status constantly preyed on his young mind, says DeAndrade, who became a U.S. citizen at age 20.

“When you grow up an illegal immigrant, you live in hiding essentially,” he says. “I always connected with nature and wildlife because I was voiceless and so were these creatures, and therefore misunderstood.

“That’s probably why I felt compelled to give a voice to the voiceless, through photography.”

Grade-school Filipe also developed a rare obsession among Clevelanders: a love for the Florida Gators.

In 2006, DeAndrade entered the UF College of Journalism and Communications (CJC) Department of Telecommunication as a production major, with a minor in wildlife ecology.

Among his most important influences was CJC associate professor Tim Sorel, a working documentary filmmaker who teaches storytelling and film production. 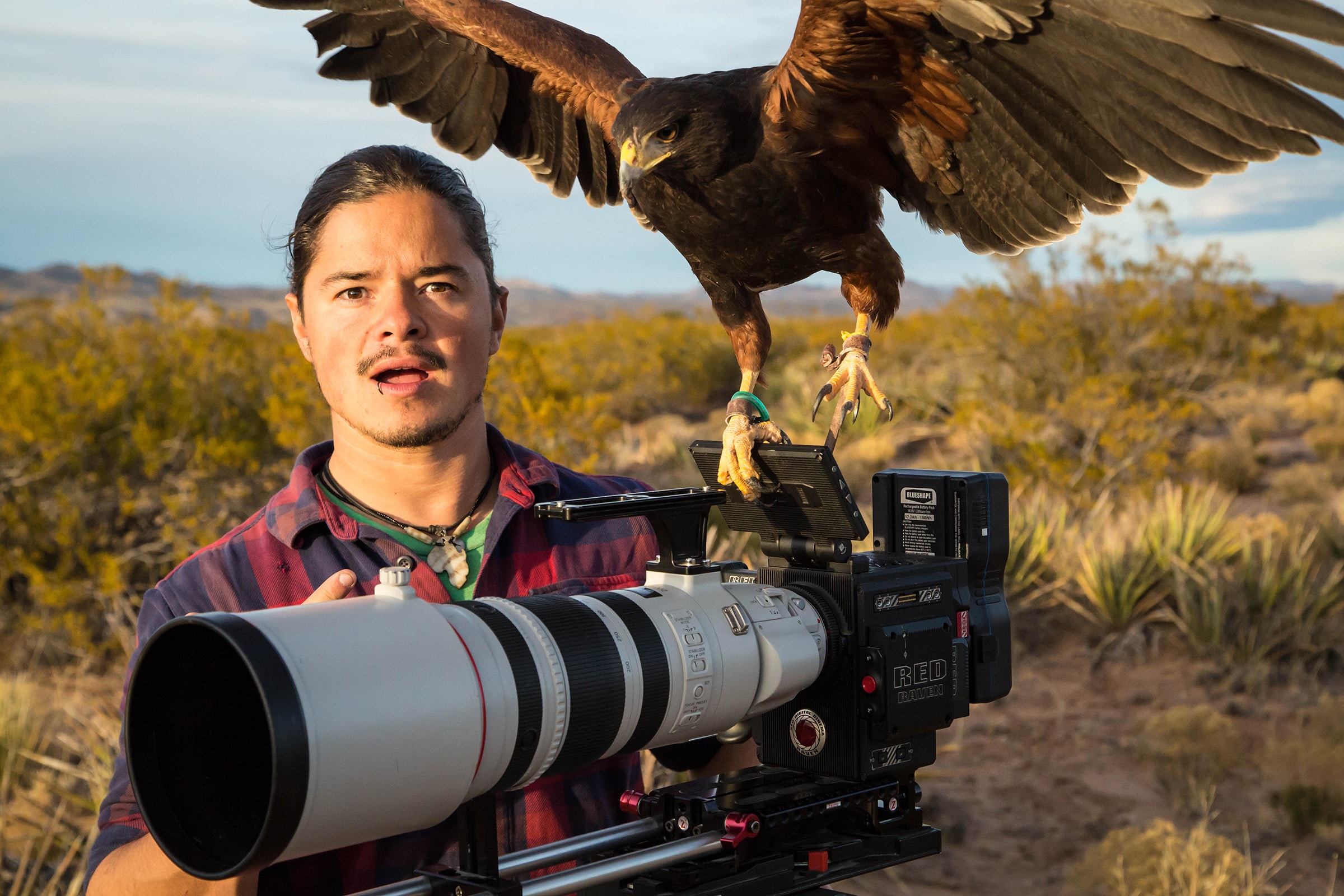 Harris’s hawks hunt in groups and can take down a speedy jackrabbit in a flash. Here a curious female surprises DeAndrade during a shoot in southern New Mexico. Photo © Mike Rollins

“Professor Sorel created an ecosystem where we could work outside the classroom and apply all the things we were learning to the real world,” says DeAndrade. “He was constantly doing commercials and films and inviting his students to participate.”

Despite working and taking a full load of classes each semester, DeAndrade always made it a priority to photograph outdoors. Five days a week, he would hop on his motorcycle and head to Paynes Prairie, the Sweetwater watershed or the beaches of St. Augustine to observe and film animals in the wild.

“Nature was my teacher,” he says. “There is no track in school or even in the real world for becoming a wildlife photographer. You learn by being thrown in the fire and making mistakes.

“It all comes back to that foundation my mom instilled in me: Figure it out.”

Two days after graduating from UF in May 2012, DeAndrade began hiking the Appalachian Trail. On the 6-month journey, cooking on a stove made from a cat food tin and filming every step of the way, he reveled in the trail’s solitude and beauty. The footage would later come in handy.

For the next two years, he worked at a production company in New York City, earning 19 Emmy nominations and 10 Emmy Awards as a director of photography. But by 2015, he had had enough of the Big Apple. 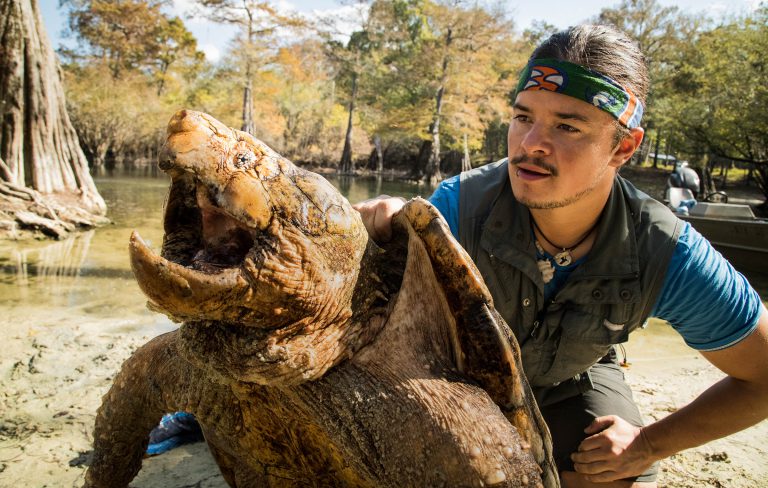 Nat Geo filmmaker Filipe DeAndrade gets up close with a 100-pound alligator snapping turtle found with IFAS researchers on the Suwannee River. Admiring the creature’s strength and design, DeAndrade jokes that the turtle’s 1,000-pounds-per-square-inch jaw pressure “is capable of circumcising a dinosaur!”

That’s when he saw National Geographic’s call for young filmmakers to submit a short film about their personal wildlife story. The prize? A four-month opportunity to film in Tanzania for Nat Geo and the African Wildlife Foundation.

Borrowing his mother’s Ford Taurus, DeAndrade spent the next five weeks photographing wildlife throughout Florida. He combined that with footage from the Appalachian Trail, along with time-lapse imagery shot out west with his former classmate, filmmaker Brian Moghari (BSTEL ’13).

At the 2015 Sun Valley Film Festival, DeAndrade’s 4-minute film “Adapt” beat out hundreds of competitors to win the second annual Wild to Inspire contest. In his emotionally powerful work, DeAndrade lays bare how he found his voice through the camera lens, stating, “If nature was my savior, then photography was my soulmate.”

DeAndrade’s subsequent standout work in Africa led to an offer to produce his own digital series for Nat Geo Wild (NGW), a global pay TV network specializing in what the industry calls “personality-driven wildlife adventures.”

Together with fellow UF graduates Moghari and McKenzie Barney (BSTEL ’12), DeAndrade formed a production house called Comfort Theory. Ditching the New York lease, he repurposed a 2006 Dodge ambulance as a camper (nicknamed “Florence the Manbulance”), and the team crisscrossed the country in search of unexpected, beautiful and threatened animals. 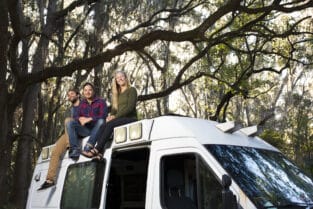 First aired in March 2017, “Untamed with Filipe DeAndrade” uses stunning HD camerawork to reveal the daily dramas unfolding among rhesus macaques in Central Florida, mountain lions and raptors in New Mexico, and alligators and crocs in the Everglades. Set in Costa Rica, season 2 of “Untamed” finds the Comfort Theory team tracking Central American hummingbirds, sea turtles, jaguars and sharks – all shared with DeAndrade’s deep love for endangered and misunderstood species, as well as his unorthodox humor.

A brightly colored hummingbird is “eye-gasmic.” A male jumping spider who successfully woos a cannibalistic female is “the Fabio of jumping spiders.”

“It’s pretty crazy to think that he has to go through an onslaught of dead bodies just to get some action,” continues DeAndrade in his voiceover for “The Weird Sex Lives of Jumping Spiders.”

“If she likes him, she’ll let him mate with her. If not, she’ll eat him.

Since wrapping his second season of “Untamed,” DeAndrade has made Costa Rica his permanent home and starred in the 2019 documentary “The River and the Wall.” The critically acclaimed film follows five friends as they journey from El Paso to the Gulf of Mexico to explore the potential ecological impacts of building a border wall along the Rio Grande.

On October 22, 2019, DeAndrade had an emotional homecoming when he appeared at UF’s Phillips Center to give audiences an unfiltered look at his adventures in wildlife filmmaking. 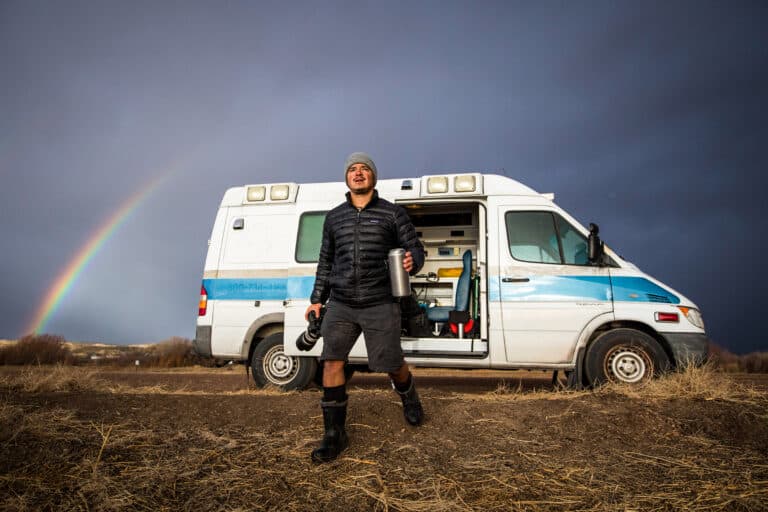 DeAndrade and his Comfort Theory crew traveled the United States in 2016 in search of diverse, iconic and unexpected animal species for season 1 of “Untamed with Filipe DeAndrade.” Their home on the road was “Florence the Manbulance,” a 2006 Dodge ambulance converted into a camper.

The appearance sparked some new ideas for his future. “One of the things I want to do is come back and teach at UF,” says DeAndrade, “maybe in two or three decades, when I start to, like, potentially slow down a bit.”

Given his current predilection for chasing mountain lions and diving with sharks, it is hard to imagine this Gator slowing down for anything, but the comment reveals how much his alma mater means to him.

“My time at UF set the foundation for my life,” he says. “Instead of dreaming and hoping, I was able to make plans and act on them.”

To contribute to the UF College of Journalism and Communications, contact Margaret Gaylord at mgaylor@jou.ufl.edu