Not long after being released as a political prisoner in Cuba, Sergio Galeano moved his young family to Gainesville where he earned advanced degrees in engineering. Those degrees set Galeano on a path that made him an icon in his career field.

Immigrant. Reluctant rebel. Widower with young children. Sergio Galeano’s life intersected with harsh chapters of history and with heartache. But his determination to “move forward,” always, would shape his family and an industry.

Just after midnight on April 17, 1961, Sergio Galeano and 1,400 other CIA-trained Cuban exiles slipped into the island nation’s Bay of Pigs on a covert mission. Many were white collar professionals or tradesmen — witnesses to Fidel Castro’s strong-arm dictatorship. If successful, the men would ignite a revolt to end Castro’s rule.

But if their invasion failed, each knew in his heart he could be shot as a traitor.

Galeano hadn’t wanted to be a soldier. He was an engineer, a scientist. Castro, though, had given little choice. So he said goodbye to his pregnant wife and daughter in Miami to join the resistance.

On that spring morning he’d returned to his beloved Cuba with a rifle in his hand.

Dr. Galeano had an incredible story, and the environmental engineering department could not be more proud to share it with its students.

The “secret” invasion, however, was anything but. Spies had warned it was coming. A Cuban radio station on the water’s edge broadcast the scene as it unfolded. Waiting in the tree line — and with no promised American air cover — Castro’s militia pinned Galeano and his brothers-in-arms on the beach. Those not killed in battle were taken prisoner or executed.

Galeano, the reluctant rebel but fierce patriot, remained a political prisoner for the next 20 months.

Until he became a Gator.

“UF symbolized everything that America had to offer our father and our family: opportunity,” Michael Galeano, one of his three sons, says. “An understanding that if you worked hard and maximized your talents, the experience could, literally, change the course of your life.”

Sergio Galeano (MSE ’64, Ph.D. ’66) died last summer. But his values, his substance, his core: ethics, resilience, justice, determination — those things live on in those he influenced.

“He never ignored his responsibilities, even under the worst of circumstances,” son Sergei Galeano says. “He made no excuses and moved forward and did what had to be done. He assumed he would prevail and find solutions to each problem.”

Most of the time, he was right.

Anxious to purge itself of the Bahia de Cochinos (Bay of Pigs) agitators, Castro’s government ended Galeano’s sentence with banishment back to Miami on Christmas Day 1962 — when, for the first time, he met his second child, Sergei.

The University of Florida, for Galeano, was a logical next step.

“Our father had already begun establishing a successful career as a young engineer in Cuba,” Michael Galeano explains. “However, he realized that having a Ph.D. from an acclaimed institution like UF would open many more doors than a bachelor’s degree from the University of Havana.” 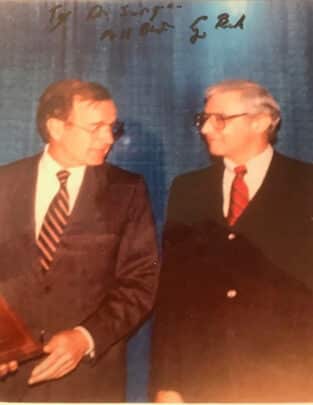 Among the many accolades during his 50-year career, Sergio Galeano was presented with an Environmental Protection Agency award in the 1980s by then-Vice President George Bush. (Photo courtesy Galeano family)

UF’s Alvin “A.P.” Black happened to be a friend of a friend. Black, at the time, was a chemistry professor who’d worked closely with Cuban scientists and engineers. One of them, knowing Black and Galeano shared an interest in water treatment systems, introduced the kindred spirits.

With that, Galeano became a Gator — a graduate student, an immigrant and father of now three returning to school at the age of 29.

“He came with just that one reference, and A.P Black and the university were willing to consider him individually and let him prove that he belonged,” Sergei Galeano says.

Belong he did. More than belonged. He shined. He always did when it came to academics.

Galeano was so bright that as a child he skipped first and second grade and went straight into third. Despite always being two years younger than his classmates, he was smarter than most. At the University of Havana, he’d finished his civil engineering degree at the top of his class — his diploma almost withheld because of campus protests cheered on by the Communist Party.

In graduate school, however, Galeano took an unexpected blow: the death of his 27-year-old wife, Margarita, killed in an auto accident. His final year at the university he’d become a widower with three small children. It was Gators, his sons say, along with Gainesville’s Cuban community that got him through that horrible stretch.

True to his resilient nature, Galeano kept putting one foot in front of the other.

And, in time, his career became even more impressive than his academic achievements.

Honors, accolades and triumphs pepper his more than 50 years as an environmental engineer. In Cuba — before the revolution interrupted his rise as a scientist — he’d been part of that country’s delegation to the World Health Organization. With his UF degrees, the climb became a soar.

Galeano, with seven patents to reduce contamination, became a world leader in pollution control standards. He lectured, authored over 50 trade articles, and served as the United States’ representative at environmental collaborations across the globe. Colleagues so admired him, they presented Galeano the pulp and paper industry’s highest award for his lifetime of contributions.

UF symbolized everything that America had to offer our father and our family: opportunity. An understanding that if you worked hard and maximized your talents, the experience could, literally, change the course of your life.

“The interaction with the international industry community, and the sense that he was highly respected within it, was a significant joy for him,” Sergei Galeano says.

There are lessons in their father’s life that his sons believe are worth clinging to.

“Don’t waste your talents,” Michael Galeano advises. “Hard work is a necessity and completely under your own control. You don’t need a Ph.D. to know right from wrong. Recognize and accept things as they are, then try to change what you can.”

Adds his brother Sergei Galeano: “Always accept responsibility for your actions and your life. While others may be the cause of your problems, blaming and dwelling on that fact does not help you move forward.”

Galeano — father of four, grandfather of eight, great grandfather of five — was 85 when he passed, grateful to the very end for his UF education. Ever the problem-solver, one of his last acts was to establish a fund to support UF’s environmental engineering students in perpetuity with a planned gift. It’s the largest endowment ever to the Department of Environmental Engineering Sciences.

The Dr. Sergio F. Galeano Endowment is for students who, like him, have the will and fortitude to strive for a greater good. 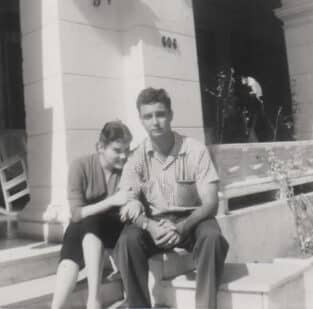 Sergio Galeano (pictured in Cuba with his wife, Margarita) was a rising star before the Cuban Revolution, even serving as one of that nation’s youngest delegates to the World Health Organization. (Photo courtesy Galeano family)

“Dr. Galeano had an incredible story, and the environmental engineering department could not be more proud to share it with its students,” says professor Kirk Hatfield, who directs UF’s Engineering School of Sustainable Infrastructure and Environment.

Among other things, his gift will support undergraduates working beside professors in the classroom and in laboratories, Hatfield says. Those experiences, he adds, will help students learn skills to become leaders in the engineering profession.

The scholarship is their father’s way to “pay it forward,” Galeano’s sons say.

“UF was the launching pad for his entire career and helped him create a life for his family in the U.S.,” Michael Galeano says. “Quite literally, it was life-altering. While he didn’t use the term ‘pay it forward,’ that is what this is. He wanted talented people with drive to have an opportunity, as he did. And he wanted them to earn it and utilize it, as he did.”

The endowment also keeps their father’s memory alive, Sergei Galeano explains — especially for students who’ve never heard of the Bay of Pigs or had the fortune to meet a man so committed to what he believed to be right.

“One of our hopes is that [scholars] will recognize that someone was willing to make this available to them, remember his name and even, perhaps, take the time to research him a bit to understand his history and career success.”

It’s an improbable tale of grit and faith.