In 1990, as Operation Desert Storm began, Lt. Col. David Waller was part of America's advance team. He stayed in the Gulf region for 11 months.

A retired lieutenant colonel says the University of Florida gave him the direction he needed to find his place in the world. His latest mission? Helping children find their way.

A still-unwinding string of adventures thread through David Waller’s life: the Easter Sunday he parachuted into a Taiwanese rice paddy; the night he was dropped into the sea five miles from Subic Bay in the Philippines, bobbing on ocean swells to spot the faraway lights that would guide his swim back home; his time stationed in an old French Foreign Legion fort in Tunisia, patrolling the Libyan border on the back of a camel; the Gulf War battle when he stood on a tarmac watching a Scud missile attack that looked to him like fireworks on the Fourth of July.

“In my career I saw four continents and over 40 countries, from the Arctic Circle to the slopes of Mount Kilimanjaro and from the Persian Gulf to the East China Sea,” the retired U.S. Army lieutenant colonel says.

The university and ROTC gave me something. I had been largely rudderless; UF gave me a sense of belonging.

In those days, Waller carried out missions (some of them covert) in exotic lands like Morocco and Egypt, Jordan and Liberia, Kuwait and Kenya and Sudan. Sometimes it was reconnaissance. Other times counterinsurgency, or training exercises with foreign commandos, or as America’s liaison to another nation’s government — his sworn duties as an officer in the United States Special Forces … and, each one, an unforgettable experience.

Even so, there were uncertainties and near misses, he admits. Like the fatal helicopter crash in Germany that would have killed him, too, had he not turned down the tempting offer for a quick trip back to headquarters to instead remain behind with his men. Or the time his flight from Jordan was unexpectedly diverted to Damascus, Syria, when he had a briefcase stuffed with classified papers on his lap.

“That one was very close,” Waller says of the Damascus incident. “But I was lucky. I never really had anything bad happen to me.”

Despite it all, his journey through the decades was spellbinding, he insists.

And he owes it all, Waller says, to the University of Florida.

Son of a Sailor

In the early 1960s Waller’s father retired from the U.S. Navy and purchased a fish camp in Cross Creek, practically close enough to Gainesville to imagine the rolling roar from a Gators’ football game in the distant miles. Waller was almost 12.

“My formative years were growing up in Cross Creek, but since I was born in Key West I refer to myself not only as a native Floridian but as a ‘Conch Cracker,’” he jokes.

Young and wild and curious, Waller learned to love the outdoors. Sometimes, armed with a compass and map, he’d trek alone deep into the palmettos and pines of the North Florida woods just to navigate his way out.

“My ambition was to become a game warden,” he says.

That changed when he was selected Hawthorne High’s senior class valedictorian. Though most of his 35 classmates went straight into the workforce, Waller was expected to go to college, to do big things, to be someone special.

So he became a Gator.

And, he thought then, a wildlife biologist.

“In my first class in basic chemistry they pulled out a slide rule. I had never seen one before,” Waller says. “They didn’t have physics or calculus at Hawthorne High School when I was there. I immediately went to registration and switched over to education.”

Then, he swapped majors again, this time to history. ROTC, on the other hand, was a consistent theme. When Waller enrolled in fall 1968, it was no longer required of male students, as it had once been, but he signed up anyway. He liked the routine and discipline — tolerated, barely, the marching.

“I fell into it nicely, but I hated the drill field,” Waller says. 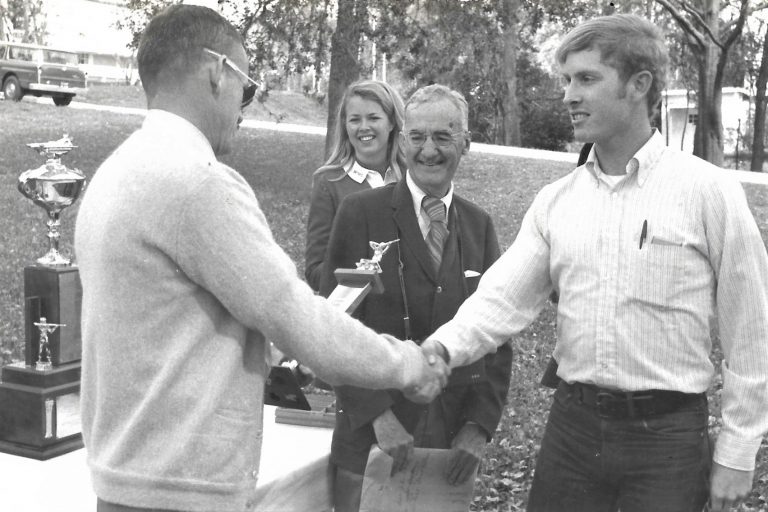 At the University of Florida, David Waller received accolades for his skills on the rifle team.

The campus gun range was a different matter. To get out of drills, he joined the rifle team. His junior and senior years, Waller was its captain, and soon convinced the university to sanction competitive shooting as a minor sport. The extracurricular work earned him a scholarship, varsity letters and ROTC promotions.

It hadn’t been Waller’s intention to be an Army officer. The Vietnam War hung over cadets, and there were things outside the Army that Waller wanted to do. But he was a good cadet, UF’s best in his class. So good, in fact, he was picked for airborne training and later — with coveted airborne wings on his chest — chosen for jumpmaster school.

“I loved the water but I couldn’t see, from my dad’s experiences being six months at a time on a ship, the Navy being for me. I knew I’d much rather be in the woods,” he says. “That got me thinking the Army wouldn’t be so bad.”

Until UF … until ROTC … until the rifle team … until the United States Army, Waller had been a little lost, he says.

“I kind of bumped along,” he says. “The university and ROTC gave me something. I had been largely rudderless; UF gave me a sense of belonging.”

In 1972, the year Waller was commissioned a brand new second lieutenant, the Viet Cong began their most aggressive campaign of the Vietnam War. The size and ferocity of the Easter Offensive, as it became known, surprised American troops and triggered panic in South Vietnam. While in America, the cry to end the war grew loud.

You don’t have to be wealthy to make meaningful contributions. Here I am, a kid who grew up in Cross Creek, able to contribute.

He was an infantry officer, an airborne ranger, the best of the best. Sooner or later it would be his turn in Southeast Asia’s jungles, whether he liked it or not.

“I wanted to get it done with,” he says.

The Paris Peace Accords kept Waller out of combat. The treaty was signed in January 1973 while Waller waited for orders to deploy. He went to Okinawa instead.

But that sense of duty and service remained throughout his career and continued when he retired from active duty in 1995 and served another 12 years as a Junior ROTC instructor in the U.S. Virgin Islands. Now fully retired, Waller, a trained scuba instructor who lives in West Palm Beach, has taught teenagers to dive, is a volunteer canoe guide at Grassy Waters Preserve, and monitors bald eagles’ nests for the National Audubon Society — when not traveling to Antarctica or Peru or Turkey or on some other distant adventure. 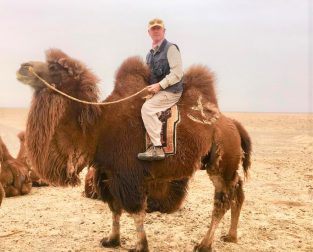 An adventurous career sparked a lifelong love of travel for David Waller, in Mongolia in 2018. (Photo courtesy David Waller)

His favorite mission nowadays is with UF’s Florida Museum of Natural History.

Waller, whose father lives near Gainesville, was visiting the university when he stumbled on the museum’s Starry Night program, a community event when children (and adults) can interact with astronomers and stargaze.

“I saw the kids engaging and said, ‘Wow, that’s really, really neat,’” Waller recalls. “When you expose a kid to natural history and to the world, that’s going to help them. I thought, ‘This is where I need to focus my efforts.’”

So he invested in the museum with a generous gift and a promise of more to come.

“Giving money to the museum is like teaching a child how to fish,” he says of his gifts. “I didn’t have much guidance and mentoring when I was growing up. But if I had had a little direction, I could have learned so much more and would have gotten more out of the experiences.”

Bringing those opportunities to other children through the Museum of Natural History is something he’s happy to do, Waller says.

“You don’t have to be wealthy to make meaningful contributions. Here I am, a kid who grew up in Cross Creek, able to contribute,” he says.

“In the grand scheme of things, we’re only here for a while, and if we can make a positive impact by engaging other people it’s going to make our legacies last longer. I have the ability now to make a contribution, and I’m doing it. And I feel good about that.”

Warrior in the Desert

The soldier and sailor were America’s advance team. Sent to establish special operations bases, Waller was in-country before the first Marine, fighter pilot or tank commander.

“The Navy SEAL and I were standing on the tarmac at the base in Dhahran (Saudi Arabia) when the 82nd Airborne landed,” Waller says. “We were there when the first elements arrived.”

For Waller, what started as a planned two-week assignment turned into 11 months. He became America’s special operations liaison for the Pan-Arab Corps throughout the Gulf War, working with Saudi Arabian, Kuwaiti, Egyptians, Syrians and even French troops to establish effective integration as a coalition with U.S. and other allied forces.

Then, as it always was in his career, it was on to the next country and the next mission.