The Talented Mr. and Mrs. Gadsby

“We support Student Affairs so other students can fully experience what it means to be a Gator,” says James Gadsby, who fell in love with Elizabeth at a UF talent show in 1989. The pair, shown here at a VIP post-party for the 1991 Gator Growl, were active in student leadership.

A love that began at a UF student show 30 years ago grows – and expands to touch countless lives.

Reitz Union, April 6, 1989: Excitement hummed in the darkened Orange and Brew pub as hundreds of students – sporting big hair, baggy jackets and acid-washed jeans – gathered for the UF Inter-Residence Hall Week Talent Show. Backstage, 19-year-old drummer James Gadsby and his bandmates in The Scam sized up the growing crowd. Their band was up first, and in their opinion, they stood a decent chance of nabbing first place – that is, if their fellow Gators liked full-throttle rock ‘n roll.

Flicking back his sandy blond hair, James did some air-rolls with his drumsticks to calm his nerves.

And then, in the wings, he saw Her.

Long wavy tresses, an angelic smile. And those eyes – those luminous eyes. They glanced at him, and his heart did a sharp catch.

What was that color, brown and green mixed together?

It was Her – the angel – shooing them into the spotlight.

They played their eight-minute set, audience cheering, but his mind wasn’t there. Afterward, he talked absentmindedly with his friends as he watched the young woman lining up the other acts to go onstage – a natural leader – and three things became painfully clear:

(1) She was the most beautiful girl there; (2) This girl had it totally together; (3) He was petrified to talk to her.

He inched closer. Elizabeth. That was what her nametag said. He took a deep breath. Just say something, he told himself.

Out of nowhere, his spirit was encouraged, giving him the nerve.

Later, he wouldn’t remember what they talked about. It was just the pure joy of being around her, a feeling that exploded off the charts when he asked if he could call and she smiled, peeling off her nametag sticker so he could write down her number.

Walking back to the dorms with his bandmates, he felt for it in his back pocket. There it was. Folded and safe.

The other guys were complaining. They’d only won third place.

James and Elizabeth were inseparable from that weekend on. The young couple shared a strong work ethic (James was majoring in finance, Elizabeth, in microbiology), a desire to help others, a love of the Gators and, most importantly, a deep faith in Jesus.

Their romance reached new heights on May 2, 1992, at Elizabeth’s graduation ceremony. As the future scientist walked across the O’Connell Center stage, James rushed forward with a “Congrats” sign that unfolded to read, “Will you marry me?”

Cheers erupted from the crowd as Elizabeth called out, “Yes!” 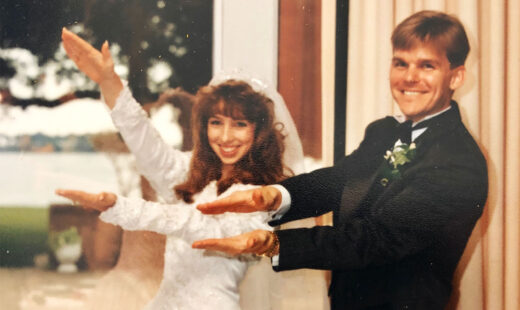 The beaming couple do the Chomp before cutting into the green gator-shaped cake at their wedding, Sept. 4, 1993.

Today, having celebrated their 25th wedding anniversary in September 2018, James Gadsby (BSBA ’91) and Dr. Elizabeth Gadsby (BS ’92) are inspiring proof that a partnership grounded in sacrificial, unconditional love and mutual respect is one key to a fulfilling life.

Three years ago, with Elizabeth’s encouragement, James traded in his former hat as IT director for a Fortune 500 company to become COO of former UF quarterback Danny Wuerffel’s (BSPR ’96) Desire Street Ministries. In turn, James supported Elizabeth’s decision to become a biotech entrepreneur consultant after a 26-year career with Kimberly-Clark, Corp.

Together, the Gadsbys work tirelessly to improve their Atlanta community, spread a positive spiritual message and give back to the Gator Nation. The Gadsby Fund for Student Leadership supports UF student government, 1,100 student organizations and 3,300 student leaders. The two recently received the Young Philanthropists Award at the annual Academy of Golden Gators.

Joe Glover, UF Provost and Senior Vice President for Academic Affairs, praised the Atlanta couple for their “generous support and leadership,” which “continue to positively impact the lives of our faculty, students and alumni.”

Said Wuerffel: “Not only are the Gadsbys two of the greatest Gators I’ve ever known, they are also two of the kindest and most generous people I’ve ever met.”

The Gadsbys give from a deep well of gratitude for all they have the privilege of stewarding. Elizabeth credits James with helping her cultivate this outlook while they were undergraduates.

“People used to say to him ‘Oh, so you’re the Great Gadsby,’” remembered Elizabeth. “I always admired how he’d say, ‘Well, I consider myself the Grateful Gadsby.’”

Today the Gadsbys’ love for UF is commemorated at the Grateful Gadsby Gathering Steps, at the top of the Reitz Union’s Social Stairs. A bronze plaque honors the couple’s “service and commitment” to the university, noting that “the first steps of their life journey together began here on April 6, 1989.”

As undergraduates, James and Elizabeth spent a lot of time on the third floor of the Reitz, participating in student government and helping produce Gator Growl. Now they want to help a new generation enjoy similar opportunities.

“We support Student Affairs so other students can fully experience what it means to be a Gator,” says James.

Being a Gator goes far beyond having a top-notch education, Elizabeth says:

“When I come across Gators in business and social situations, I notice they tend to live the motto, ‘Work hard, play hard,’” Elizabeth said. “Gators are serious about competing and excelling, but they don’t put others down to get ahead.

“As a Gator, you want to win, but you want everyone to win. So it’s win-win, instead of win-lose.”

James grew up in Sarasota, hanging with friends on the beach and drumming in rock bands and high school ensembles. His father was a competitive sailor, and James fondly remembers crewing for him in his early teens, along with his sister, and helping Dad win three of four divisional series titles one year.

Some of James’ close friends from Pine View School for the Gifted had their sights set on UF, so it was a natural path for him to become a Gator. For Elizabeth, the journey was more circuitous.

Elizabeth (née Deibler) was a year behind James in high school, up in Fort Walton Beach, playing oboe in the marching band and preparing for a career in science, like her parents before her. No beach bunny, Elizabeth spent part of her summer vacations in Atlanta sitting in on her grandmother’s writing classes at the Georgia Institute of Technology, where she was one of the institute’s first women professors.

Also during her summers, Elizabeth interned for the Department of Defense at the nearby Eglin Air Force Base, preparing samples and conducting experiments at its High Explosive Research and Development Lab.

Her prudent parents had one demand about college: She had to visit at least one in-state university before making her final decision on where to go.

Stepping foot on the UF campus changed her mind – and her life.

“I just loved the campus, the interactions with the students who gave the tour [the Cicerones], and the professors that I was able to meet in their offices,” said Elizabeth.

She was also impressed by the diverse academic disciplines nurtured at UF’s 16 colleges.

“I still feel that’s one of the unique and valuable things about UF, and even more so today,” she said. “You have so many opportunities to collaborate across different fields.”

A chance encounter at a talent show may have led James to his soulmate in 1989, but it was by fulfilling a prerequisite for the College of Business that James ultimately landed his first job.

A required class in Fortran, an early programming language, introduced James to computers. Soon he was working in UF’s computer lab, and after graduating in ‘91, he was offered a position in Tampa with Accenture, a global IT consulting company.

Close on his heels, Elizabeth earned her BS in ‘92, after which the couple married and moved into their first home in Atlanta. There they embarked on careers with two giants of American business: James, with The Home Depot, and Elizabeth, with Kimberly-Clark.

James rose to become a senior IT manager and eventually director of IT, serving a $1 billion subsidiary of Home Depot. While working full time, James earned an MBA at Georgia State University. Likewise, Elizabeth earned a PhD in biochemistry and analytical chemistry from her father’s alma mater, Georgia Tech.

Elizabeth made a considerable impact as a scientist and leader during her two decades at Kimberly-Clark. Working closely with other specialists, she amassed nearly 40 patent credits for consumer products, including water filtration systems and improvements to Huggies® diapers and Pull-Ups® pants. She also oversaw the phase 1 clinical trials of K-C’s Sofusa™ transdermal drug-delivery system, which transfers medications through the skin without painful needles. 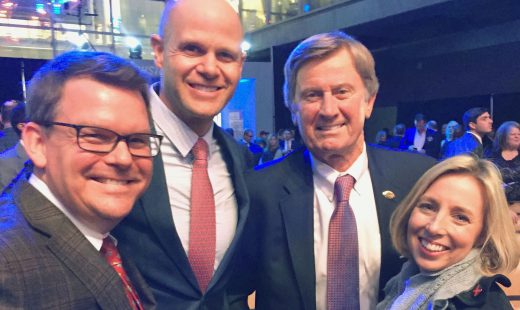 Her biggest rewards, she says, come from improving people’s everyday lives through science.

Take, for instance, that not-so-glamorous product, Depend® adult diapers. Elizabeth contributed the biochemical know-how to a breakthrough that better controls odors in the product’s lining.

Observing a focus group for the improved product, Elizabeth heard transformational stories of people finally being able to attend meetings and go shopping – daily activities they had previously avoided.

“That touched me,” said Elizabeth. “The solution was simple, from a scientific standpoint, but their comments made me appreciate how even a basic product improvement can have a real impact on society.” (In the case of the U.S. adult-diaper market, that “real impact” translates to about 25 million users annually.)

In June 2018, she bade goodbye to Kimberly-Clark and hung up a shingle as a technical consultant for Profusa. The private company is developing tiny tissue-implanted biosensors that continuously monitor levels of tissue oxygen and blood glucose, to aid those with chronic wounds, sleep apnea, COPD and other conditions.

Prior to Elizabeth striking out on her own, James made an even bigger leap of faith professionally. Despite enjoying a successful career at Home Depot, “I felt God calling me to do something more purposeful with the balance of my career,” he said.

For seven years, he and Elizabeth had served on the board of Desire Street Ministries, which supports ministry leaders in impoverished and violence-stricken communities by offering coaching, staffing, business planning and fundraising services. One day over lunch, Desire Street’s executive director, Danny Wuerffel, asked James to join his team as COO. Two months later – after much prayer and discussion with Elizabeth – James said yes.

It wasn’t easy transitioning from an $88 billion international retailer to a small regional nonprofit, but today James couldn’t be happier with his choice.

“We love the mission of Desire Street and helping leaders who serve in under-resourced neighborhoods across the South,” he said.

Each year, during Florida-Georgia football weekend, the Atlanta nonprofit raises funds via the Desire Cup golf tournament at Jacksonville’s TPC Sawgrass, which features Gator and Bulldog celebrities in friendly competition.

While the pair feel slightly self-conscious about being referred to as “philanthropists,” they insist that giving back to UF is something that every alumnus, at whatever stage of life, can do.

“Just give what you can,” said Elizabeth. “Whether it’s time, helping with the career fair, mentoring, making a donation. Cultivate that gratitude.”

This April, it will have been 30 years since James and Elizabeth met at a rowdy UF talent show, and the tongue-tied drummer scribbled his crush’s number on a disposable nametag.

Remarkably, the Gadsbys have hung onto the crumpled sticker all these years. It’s traveled with them from the Reitz Union to James’ dorm room to the Atlanta apartment they lived in as newlyweds to their current townhouse in Marietta.

“The University of Florida gave us the origin of our relationship and life journey together,” said James. “It will always be integral to our heartbeat.”