From Spurrier ‘Guy’ to Surgical Scrubs

Michael Gilmore was a two-time first-team Academic All-American while starring for the Gators.

Head Ball Coach Steve Spurrier calls Michael Gilmore ‘one of the best student-athletes ever to come to Florida.’ The orthopedic surgeon calls UF ‘a place of excellence.’

Up in the state’s panhandle, roughly 100 miles from Tallahassee to the east and Pensacola to the west, is the little town of Chipley. It’s a glimpse back to old Florida. A powder-blue water tower looms over the business district; a railroad meanders past homes and storefronts; a free-standing chalkboard outside Katie’s Kafe advertises lunch specials.

This, for Dr. Michael Gilmore, was home. His beginning.

It’s where he discovered a love for science and sports. Where his father, UF alumnus Theron “Dow” Gilmore, was a business partner at Kings Discount Drugs — a combination drugstore, hunting and fishing shop. Where his mother, Margaret, and sister, Leanne Pedraja, still own the clothing store Emmie & Co. on Main Street and brother-in-law John handles Gilmore’s medical practice’s marketing and social media. It’s also where Dow, Margaret and Leanne, along with sister Kim Gay, encouraged Michael to reach for the heavens.

“Chipley’s small but the coaches and teachers there were excellent. The discipline I got growing up there, the things I learned and the skills I developed took me to the University of Florida,” he says.

What was around me was excellence. Expectations were high, both on and off the field. We were all trying to do the same thing: be as good as we could. It was just how it had to be.

In 2004, 14 years after Steve Spurrier made him a centerpiece of his first Gators recruiting class, Gilmore returned to northwest Florida as an orthopaedic surgeon. His practice, Panhandle Orthopaedics, has since grown to serve patients all along the I-10 corridor and into southern Georgia and eastern Alabama. The tenacious kid from Chipley lives in nearby Santa Rosa Beach now, with doctor’s offices in Crestview, Panama City Beach and Pensacola.

But even with all the years and all the miles that separate Gilmore from Gainesville, there’s still a lot of University of Florida inside the Gator great. It’s where he met wife Laura and the couple’s first child, Madison, was born.

“There are so many things I experienced there to prepare me physically, mentally and emotionally for the real world. Folks there are superb at what they do, and from them — whether coaches and teammates, professors or students in my classes and labs and residency — I gained pearls to deal with both success and adversity.”

1990 was a big year for Gators. Spurrier was back. And with the one-time Heisman winner, a return to the swagger, razzle-dazzle and glory that had eluded the orange-and-blue for much of the 1970s and ’80s.

The Gator legend’s first order of business: recruit players with high character who’d buy into the kind of commitment that Spurrier (BSPE ’81) demanded. In Gilmore, the “Head Ball Coach” found a kindred soul. Even now, he refers to Gilmore as “one of my guys.”

“Michael did what the team asked him to do,” Spurrier says. “He was smart. He gave maximum effort on every play. He was a guy we could count on.”

And in Spurrier, Gilmore had a coach he could count on, too.

“I was extremely fortunate and lucky to be able to attain a scholarship to the university and to play with Coach Spurrier,” Gilmore says. “What was around me was excellence. Expectations were high, both on and off the field. We were all trying to do the same thing: be as good as we could. It was just how it had to be.”

Gilmore’s toughness and intelligence made him a natural leader. By the time the clock ticked 00:00 in his last game in a Gator uniform, he’d lettered all four seasons as a free safety, seen his team win four SEC championships and twice been named a first-team Academic All-American. A captain in 1994, teammates voted him that season’s Fergie Ferguson most valuable player in recognition of his leadership, character and courage.

Without question, No. 35 was special, Spurrier says.

“He’s one of the best student-athletes ever to come to Florida. And it wasn’t just with academics. He did everything well,” the coach says. “There are very few like Michael.”

Sometimes I had to leave football practice a little early so I could get to the chemistry lab, even if it meant halfway being in my football pads because I didn’t have time to change.

Pure student-athlete, he was committed to pre-med studies as to football.

“That was challenging, very tough at times,” he recalls of balancing sports and academics. “Sometimes I had to leave football practice a little early so I could get to the chemistry lab, even if it meant halfway being in my football pads because I didn’t have time to change.”

It couldn’t have happened, he says, without the support of coaches and professors.

“From the athletics aspect, they were understanding of my academic load. And from an academic standpoint, they knew I had other major responsibilities but really wanted to excel academically,” Gilmore explains.

Case in point: the week the 1993 SEC Championship game conflicted with Gilmore’s formal interviews with representatives from the Rhodes Scholars selection committee.

“I had to miss a good bit of practice that week to do the interviews and go through the Rhodes Scholars process, but my coaches were very understanding,” he says. “Missing such an important week of preparation for the SEC Championship game, I was still able to go out onto the field.”

Spurrier brushes aside his call to have Gilmore start the game.

“He knew what to do,” Spurrier says. “The other things he was doing that week were important.”

That decision turned out to be a good one. That game, Gilmore came down with two interceptions in the Gators’ 28-13 win over the Crimson Tide on Birmingham’s Legion Field.

Gilmore, to most Gator fans, is remembered as the gutsy defensive back who offered thoughtful insights during postgame press interviews. What fans didn’t always see was his determination to be great on and off the gridiron.

“Back then, being self-motivated and pushing myself to the limits in all aspects for all those years at the university — the day-to-day grind, back-to-back-to-back, just over and over — makes me proud,” he says. “That hard work was a difficult path, but that’s what shaped me later in life for the rigors of my profession. It’s hard for me to just give up.” 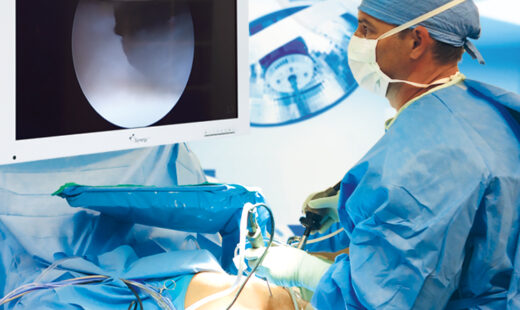 That’s one reason Gilmore is such a popular orthopaedic surgeon, twice board certified, and a fellow of the American Academy of Orthopaedic Surgeons. It’s also why he’s so invested in his alma mater. He and Laura (BSESS ’93, BSMD ’98, MPAS ’98) are generous in their support for UF Health, the College of Medicine and Gator Athletics. Their Gators for Life Scholarship, for instance, assists student-athletes from all sports. The Gilmores gave the naming gift for the medical school’s new admissions office and last year made a large contribution to renovate UF Health Shands Hospital’s neonatal intensive care unit. The NICU gift is especially personal. Daughter Madison was cared for there as a “preemie” when Gilmore was a surgical resident and Laura a dermatological physician assistant in Gainesville.

There’s still more the couple wants to do for their university, Gilmore insists.

“I was very fortunate that I was able to excel with the help of coaches and professors. But I also understand that the University of Florida is a place of excellence, and you’re expected to exceed and excel to make yourself better,” he says.

“I don’t take for granted what I was given back then. It gives us a sense of great pride that we are part of such a unique and special university — that isn’t only phenomenal with all sports, but in academics, regardless of profession or field, is ranked among the top public universities in the country.”

For the Gilmores, the University of Florida is a generations-spanning family tradition. Along with both of Gilmore’s grandfathers and his father, Theron (BSP ’64), being alumni, so are his brother-in-law, former Gators golfer Brian Gay, and Laura’s sister, Emily Wilen (BSBA ’98). Niece Makinley Gay is a current UF cheerleader; and daughter Madison is looking forward to her turn at the university. The connections don’t stop there. Laura’s parents, John and Susan Stewart, are avid Gators even though neither studied at UF.

Nowadays, the Gilmores don’t make it back to Gainesville as often as they’d like. Their jobs and children’s activities swallow most their time. Madison plays lacrosse at South Walton High and, in a nod to her own premature birth, is busy with her newly established NICU support group, Madison Gilmore Place, for mothers of other preemies. Son Grant is a standout athlete at Emerald Coast Middle School.

UF, however, is never long out of their minds, Gilmore says.

“I get really exciting when I see someone with a Gator hat or shirt. We immediately have a bond, even if we don’t know each other,” he says. “A lot of that comes from just having pride in all that we have there.”

For the Gilmores, though, those ties to their alma mater run a little deeper than with most alumni. Both spent more than a decade on campus.

“For me, being there 14, 15 years straight, I still have lifelong friends from football and medical school — undergraduate into residency. You really establish lifelong bonds,” Gilmore says. “What do they say? ‘If when you die you have five real friends you’ve done wonderful?’ I feel like I’ve got a lot more close friends than that.”

Ever looking ahead to the next challenge in life, Gilmore says he’s working to improve as a surgeon. In time, he also hopes to volunteer more in underserved communities and maybe bring his medical skills overseas.

“I see that as my biggest challenge going forward — to continue trying to be the best I can,” he says. “I just want to keep working, keep giving, trying to be as good a role model as I can for my kids, my patients and the students and athletes at the University of Florida.

“I’m trying to live a life I can be proud to live.”

Fields of Honor
Some of Michael Gilmore’s college accolades