Dr. Linda Aiken is the world’s leading authority in the causes and consequences of nurse shortages in the United States and globally. For 31 years, she has directed UPenn’s Center for Health Outcomes and Policy Research, whose findings have changed hospital policies in 30 countries.

A popular saying goes, “Save one life, you’re a hero. Save a hundred lives, you’re a nurse.”

In the case of renowned nurse researcher Linda Aiken, Ph.D. (BSN ’64, MNSG ’66), that number should probably be revised to “millions of lives.”

Since 1988, Aiken has been an endowed professor at the University of Pennsylvania School of Nursing and director of its Center for Health Outcomes and Policy Research. Her pioneering research has led to fundamental changes in hospital nursing policies in more than 30 countries, improving outcomes for millions of patients and garnering newfound respect for nursing professionals. The recipient of every major research award in her field and an elected member of the U.S. National Academy of Medicine, this year she was honored by Ireland’s Royal College of Surgeons, after which she flew to Singapore to address the 2019 International Council of Nurses Congress on the global issue of safe staffing.

And she owes it all, she says, to the UF College of Nursing, whose legendary founding dean, Dorothy M. Smith, mentored Aiken as an undergraduate. In gratitude for her education at UF, Aiken generously endowed the Linda Harman Aiken Professorship at the college to support excellence in nursing research.

At UF I received the best possible education I could have ever gotten, anywhere. The inspiring faculty set me on my whole life’s course.

At the 2016 Dorothy M. Smith Leadership Conference where this generous gift was announced, Dean Anna McDaniel, holder of the professorship, noted, “Like Dorothy Smith, Dr. Aiken is a true visionary and pioneer for the nursing profession. Her contributions are endless and span the world.”

Says Aiken: “At UF I received the best possible education I could have ever gotten, anywhere. The inspiring faculty set me on my whole life’s course.”

A Gator from Go

Born in Virginia in 1943, Linda moved to Florida as a young child and grew up one of four siblings in Gainesville, one block from the UF president’s house. Both Mom and Dad held degrees from the College of William & Mary, and her father, William Harman (MED ’64), worked for Sealtest Dairy before the UF College of Agriculture’s Extension Service convinced him to apply his talents to Florida’s dairy industry.

Hers was a Gator-centric upbringing, with the young Harmans attending every football game and homecoming, eating ice cream treats shaped like Gator footballs and giving a shout when the original Mr. Two Bits led his trademark cheer.

When it came time for Linda to pick a college, she naturally chose UF. (Her two brothers also attended, as does her granddaughter, Katherine Rose [4 Agricultural & Life Sciences], recently voted the best junior in her college.)

A popular series of mystery novels she’d read as a child, “Cherry Ames, Student Nurse,” had sparked Linda’s early interest in the profession, and it so happened UF had established a College of Nursing in 1956, with Dorothy Smith as its founding dean.

“Nursing is a fabulous career,” says Aiken. “You can continue to grow over your career and be happy doing it for a lifetime.”

For Linda, that growth would take her in directions beyond what most nursing students in the early ’60s could have imagined.

Mentored by the Best

When Aiken entered the College of Nursing in 1960, the program had just graduated its first undergraduate class. Those 25 BSN-holders were the fruit of a bold, innovative program designed by Dean Smith that integrated research, education and practice and made nurses directly responsible for their patients’ welfare, aided by a new technology: the clinical assessment database.

It wasn’t long before Dean Smith took notice of the redheaded freshman who seemed so at home on the UF campus. 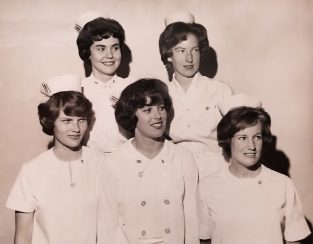 When Aiken (top right) graduated with a BSN from the UF College of Nursing in 1964, a minority of RNs held baccalaureates. Today, 55 to 60 percent of hospital nurses have a BSN, a staffing standard that saves lives, as shown by Aiken’s seminal research.

“Now, how an 18-year-old gets to be close friends for a lifetime with their dean is kind of an interesting idea!” Aiken laughs. “But that’s what happened. She was a very charismatic person who introduced me to all the possibilities in nursing, very ahead of her time.”

Dean Smith, who died in 1997, taught her students to aspire to the ideal of the “intellectually inquiring nurse,” says Aiken. “She instilled in us that, being nurses, there were many interesting questions we needed to answer.”

Aiken remembers the newly designed health sciences campus as an intellectual greenhouse where experts from a variety of disciplines came together.

“The UF Health Center was one of the first real academic health centers in the country,” she explains. “It had this fabulous ideology that it was going to be an egalitarian, interdisciplinary place for all the health professionals to excel and work together as a team to benefit patients.”

After earning her BSN in 1964, Aiken went to work on the sixth floor of Shands Hospital, in the early days of open-heart surgery.

“It was a thrilling and wonderful area to be where science was creating new things every day,” says Aiken, “But we were flying by the seats of our pants, both on the physician side and in caring for these patients.” (Doctors were still operating on dogs to perfect their techniques, she remembers.)

By this time, Linda was married to James Aiken, a UF student, had a young daughter, June, and was living in Flavet Villages, the university’s housing for married students. Juggling work, school and motherhood, Linda went back to UF to get her master’s degree in 1966, becoming one of the nation’s first clinical nurse specialists in the care of post-operative heart-surgery patients.

The following year son Alan was born, and the family resettled first in Columbia, Missouri, and then in Austin, where her husband took a faculty post at the University of Texas. There Linda pursued a Ph.D. in sociology and honed her research skills, with an eye on solving issues she’d observed as a practicing nurse.

Like Dorothy Smith, Dr. Aiken is a true visionary and pioneer for the nursing profession. Her contributions are endless and span the world.

While caring for open-heart patients at University Hospital in Columbia, for instance, Aiken and her colleagues saw that many developed terrible psychosis after surgery.

“They’d become completely unhinged and paranoid, which could cause a lot of damage,” she says.

To solve this problem, Aiken teamed up with a psychologist to design a “systemic relaxation intervention” for heart surgery patients. It worked successfully, and the 24-year-old published her first co-authored paper, launching her career as a nurse researcher.

Aiken came into her own in 1973 when she was awarded a postdoctoral fellowship to study medical sociology at the University of Wisconsin. She didn’t know it at the time, but that fellowship was funded by a huge new healthcare foundation created by the estate of the founder of Johnson & Johnson.

A year later, Aiken went to work for the Robert Wood Johnson Foundation itself and stayed for 13 years, from 1974 to 1987, rising to vice president. The foundation was seeking ways to improve healthcare delivery for all Americans, and Aiken’s role was to design interventions, find researchers to test their efficacy and oversee the studies, ambitious multimillion-dollar initiatives taking place at up to 40 sites simultaneously.

“It was like a quasi-university,” she says. “I learned so much there.”

One of her landmark achievements was overseeing studies that pioneered the use of nurse practitioners in primary care settings.

Aiken also worked with government programs, like Medicare, and in that capacity she achieved her first public policy breakthrough.

The difficult task of caring for terminally ill patients had always fallen to nurses, and while hospice and palliative care existed in Europe, they weren’t yet part of U.S. medical practice. With Aiken’s participation, the foundation and federal government partnered to bring hospice to the United States at multiple sites in a mid-1980s trial; their findings demonstrated that organized hospice care was safe, cost-effective and would spare patients uncontrolled pain.

In 1988, Aiken stepped into the Dorothy-Smith-type role she had long envisioned for herself: She accepted a triumvirate of positions at the University of Pennsylvania as the Claire M. Fagin Leadership Professor in Nursing, Professor of Sociology and Director of the Center for Health Outcomes and Policy Research (CHOPR).

Her first move at CHOPR was bold: At the height of the AIDS epidemic, with hospital wards crammed with severely immuno-compromised patients and no cure in sight, she secured an NIH grant to determine if nursing-led care could help these patients.

“Nurses were just trying to help people survive these terrible infections, so how well patients did in hospitals very much depended on what nurses did,” says Aiken.

CHOPR researchers found that if part of a hospital was dedicated solely to AIDS care and nurses organized the unit around controlling patients’ symptoms, those battling AIDS had better survival and patient satisfaction rates. The key was to give nurses autonomy.

“We published those findings,” says Aiken, “and our whole research program took off from there.”

Thirty years later, CHOPR researchers have built up a body of data-driven research, with findings appearing in the New England Journal of Medicine, The Lancet and other prestigious journals.

Today, the medical field views nursing research as a source of innovation, says Aiken, now a Senior Fellow at the Leonard Davis Institute of Health Economics at UPenn. Many of her center’s long-term studies have confirmed what nurses could have easily explained anecdotally – for instance, that having fewer patients per nurse and organizing hospitals to facilitate professional nursing care result in better outcomes. But the numbers and analysis were needed to convince the medical establishment.

There’s been pushback to some of her findings, she acknowledges, most notably to her recommendation that all nurses obtain a nursing baccalaureate. Stakeholders in the community college movement were opposed, but the data bore out her core hypothesis: The more nurses with BSNs a hospital has, the lower patients’ mortality rate after general surgery.

“Every 10 percent increase in the percent of nurses with a baccalaureate degree was associated with a 5 to 7 percent decrease in mortality” says Aiken. 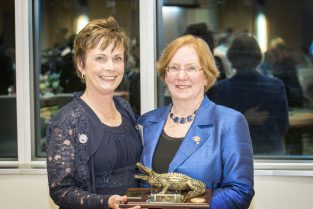 “We are so fortunate to call Dr. Aiken a Gator Nurse,” said UF College of Nursing Dean Anna M. McDaniel (left) while presenting Aiken with the Dorothy Smith Legacy Award in February 2016. The award honors the visionary spirit and influence shared by Aiken and Smith, her mentor at UF.

Based largely on Aiken’s research, the Institute of Medicine of the National Academies of Science now recommends that 80 percent of U.S. nurses hold a BSN by 2020. Her subsequent research in other countries influenced the European Parliament’s decision in 2013 to recommend university education for nurses in the European Union.

Today, some of the most basic protocols that Americans take for granted – the presence of nurse practitioners, the high odds that the nurse tending to us will be well educated, the fact that Medicare will pay for hospice if we’re bidding farewell to this earth – are thanks to the efforts of Linda Aiken.

Nursing is the future of health care, she observes, and UF is at the forefront of that change.

“The University of Florida has such a strong tradition in nursing,” she says, her voice warm with nostalgia and pride. “They’ve produced an amazing number of people who are now leaders in healthcare, both in academia and big institutions and research.

“Gators should be very, very proud.”

To support the Linda Harman Aiken Professorship in Nursing Research Excellence at the UF College of Nursing, call Anna Harper at (352) 273-6360 or email aemiller@ufl.edu.

Please select an amount to give. - Other hide =