Laura Laser says she always knew her future held a creative profession. Her first architecture class at UF gave her the direction she needed.

Women in architecture are a rarity, says Gator grad Laura Laser. The successful architect has a plan to change that. “I want to make sure other women students get the same kind of support I got,” she says.

There was something enchanting to Laura Laser about the unfinished house — the exposed trusses and wall studs, the copper pipes. As she and her sister watched the stars through their roofless attic that night in 1968, Laser believed construction could be magical.

That’s where the trail of bread crumbs begins, she says — with the “sticks and bricks” that turned her father’s vision into their home. Now, a lifetime later, that trail has guided her to becoming one of Florida’s leading civic architects.

Back then, Laser was one of the few children in Volusia County who could tell a Phillips-head screwdriver from a flat head. The home’s construction site was her playground, where she and her brother collected discarded electrical wires, where she and her father tinkered with wood, where she supervised her mother supervising workmen. The sisters had pleaded with their parents to let them camp inside the half-built house. That it had no roof made a sleepover even more enticing. And so it was that evening five decades ago that the girls climbed a ladder to their second floor nest, rolled out their sleeping bags, and giggled in wonderment of the night skies.

I wouldn’t be where I am today if it weren’t for me finding my place at UF in that design studio. That’s where I found my purpose in the world, and a lot of people helped me get here.

“I think that’s probably where I got the bug,” Laser (BDES ’86) remembers.

The “bug.” An itch to do something — anything — creative with her life. In high school, it was drawing and graphics and pottery and photography and fashion design. In college, Laser thought it might be interior design.

“I was all over the map,” she says. “All I knew was I wanted to do something art related.”

Her first class in UF’s architecture college was all it took for Laser to understand she was meant to be an architect.

And so she has.

“If you’d have told me when I was 5 years old, looking through those trusses, that I’d grow up to be an architect,” Laser says, “yeah, I probably would have believed you.”

The morning the Twin Towers fell, Laser was at a construction site in Houston discussing what would become a shelter for battered women. While news spread of the terrorist attacks, the group’s meeting went on without pause, a moment of silence or, to her dismay, even acknowledgement. The callousness confused her.

“We went about business as usual. There was no talk about the attack, nothing,” Laser recalls. Inside, she says, she was reeling.

On the walk to her car afterward, she glanced back toward the construction site. Draped over the building’s face was the largest American flag she’d ever seen.

“I just stood there and I got it: they were honoring in their way,” Laser says. “I had a renewed conviction that, ‘Oh, you dummy, you need to do your job. And the most important job you can do right now is to get this shelter built ASAP for these women and children. When things are falling down do you crawl into a corner? No. You keep doing your job because people are counting on us.’” 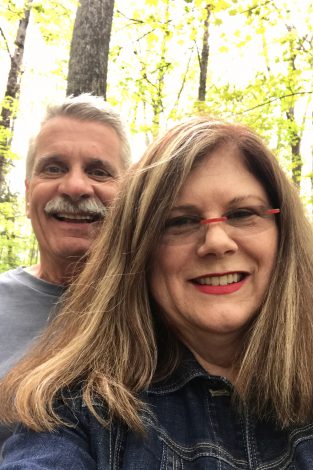 Laura Laser (here, with her husband David) created a gift in her estate plan to advance women in architecture.

That epiphany became her code. In time, Laser left the high-priced design firms, working on projects with heavy-hitters like The Walt Disney Co. and Florida Hospital, to return to Volusia County for a government job building municipal airports and jails.

The not-for-profit side of architecture suits her, Laser says.

“It’s really fulfilled that purpose I had,” she explains. “We can improve the community with what we’re doing. We can uplift people and do the right thing.”

And, really, that’s what Laser has wanted to do since her first week in Professor Wiley Tillman’s architecture class all those years ago.

“I’d always wanted to create things,” she says. “But by the time I left UF, my reason for wanting to be an architect was different. I was thinking about how people would experience a space and how that experience might improve their lives.

Words to Live Up To

There’s a lot of good ol’ boy in the construction business. Laser knows this firsthand. Not long ago, following several phone conservations with a colleague from an engineering firm but with no face-to-face introductions, she went to a construction site to consult with him. “Wow, Laura, you’re prettier in person than you are on the phone,” he told her.

It’s been that way her whole career — the comments, the looks, the whispers, the disregard for being a woman in a “man’s job.”

“That’s the stuff. It’s minor but it’s still out there,” Laser says.

The trick, she’s learned, is to call out sexism when appropriate, be professional and mentor up-and-coming architects — men as well as women. Those lessons go back to her time at the university when she was one of the few women in her architecture classes.

My professors were behind me; my school was behind me. It was time I give back and it’s the right thing to do.

“Because I got so much encouragement and support from faculty, when I got into the working world and did encounter some backward folks, I had the confidence that I could do it all,” Laser explains. “My professors were behind me; my school was behind me.”

One professor’s words still ring. Laser was sketching a floor design when he asked, “You’re not going into interior (design), are you?” She answered, no, she wanted to be an architect. “That’s good,” the professor responded, “because you’ll be a fine architect.”

“I feel I’ve carried in my heart all these years the words my professor said,” Laser says. “I want to make sure other women students get the same kind of support I got.”

A Gift to Build On

To do that, she and other alumnae from UF’s College of Design, Construction and Planning shared their experiences and advice during the college’s 2018 Women’s Leadership Summit. Laser also established a graduate fellowship specifically to advance women in architecture. 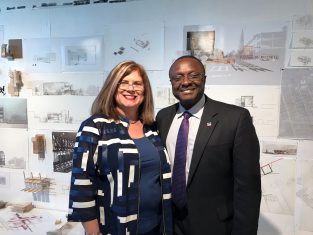 Laura Laser said her UF professors gave her the confidence to pursue a career in architecture. Here, with Dean Chimay Anumba of the UF College of Design, Construction and Planning.

The fellowship, created with a gift in her estate plan, is her way of passing it on, Laser says. She can relate to the burden of graduate school’s costs. Add to that the history of architecture being mostly a career for men, and even fewer women apply. That was her situation years ago. When it was time to put together her own portfolio for graduate school, her then-boyfriend wondered why she’d go through all that trouble, being a woman and not a serious candidate. And in her master’s program at Washington University in St. Louis, financial assistance was scarce.

“Then when I got into the working world, I found there were a lot of women who would start out in firms, have families and disappear. They didn’t continue with their careers,” Laser says. “It’s still disappointing that I rarely have women architects come through my door. I’d like to see those numbers higher.”

Her fellowship, she hopes, will open the door a little wider for more women.

“It was time I give back and it’s the right thing to do,” Laser insists. “I wouldn’t be where I am today if it weren’t for me finding my place at UF in that design studio. That’s where I found my purpose in the world, and a lot of people helped me get here.”

Nowadays, when Laser reflects on the bread crumbs — and the play of the night stars when she was 5 — that led to this place in her life, she’s pleased.

“I always wanted to be successful as a student, but I never thought about the kind of car I was going to drive — I wanted to succeed in my profession,” she says. “I wanted to be one of the best architects. 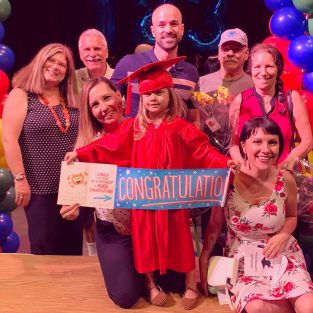 Granddaughter Claire at her pre-K graduation. Laura Laser is doing her part to support the education of future generations.

“And I feel I’ve achieved that.”

At the same time, Laser can’t help but wonder what the possibilities will be for another 5-year-old.

This spring, to celebrate her granddaughter Claire’s pre-kindergarten graduation, she gave the girl a Barbie doll. Laser’s husband, David, questioned the choice.

“She's a little girl,” Laser responded. “Claire can have all the dolls she wants and still be a scientist, an attorney, maybe even an architect.”

And that, Laser says, is what made her own career path and the UF fellowship she created so important.

“On days like these,” she says, “I'm filled with profound optimism about the future of women in leadership, particularly for a certain 5-year-old blonde.”