With a flick of the wand and those bewitching words, young wizards at Hogwarts School make objects fly in the air. But if you thought the levitating magic of Harry Potter only happened in books and movies, think again.

Since Universal Orlando launched the Wizarding World of Harry Potter in 2010, attendance at its twin theme parks has soared to record-breaking heights.

And leading the marketing wizards who entice all those visitors is creative powerhouse Alice Norsworthy (BFA Art ’81).

As executive vice president and chief marketing officer for Universal Parks & Resorts, this proud Gator alum wins accolades for her team-centered leadership style and her uncanny ability to tap into the dreams and desires of potential guests.

“The strength and beauty of Alice’s leadership is her ability to figure out the essence of what makes J.K Rowling’s universe so compelling and to translate that, in marketing campaigns, so people respond, “I have to be part of that!’” says Bill Davis, president and chief operating officer of Universal Orlando.

Davis also commends Norsworthy for creating strong emotional connections between audiences and the resort’s other offerings.

“Her skill at communicating all our experiences here at Universal Orlando, from our attractions to restaurants, is phenomenal,” says Davis. “She is the marketer who’s been key to our success.”

No one-hit wonder, Norsworthy and her teams’ efforts have been luring visitors to Florida attractions for years.

In addition to successfully launching Wizarding World, Norsworthy oversaw the branding and launch campaigns for Despicable Me Minion Mayhem (2012) and Transformers: The Ride 3-D (2011), two of the resort’s most popular attractions.

Prior to that, as senior vice president of marketing for Royal Caribbean International, Norsworthy helped get cruise passengers hooked on onboard surfing via the Freedom class of cruise ships, the first to introduce the FlowRider surf simulator. She also guided Royal Caribbean to a 30 percent sales increase in the mid-2000s, when the rest of the cruise industry was suffering a large downturn in bookings. Those achievements earned her recognition by Advertising Age as one of America’s Top 50 Marketers, “who broke through the clutter and delivered real impact (and ROI) for their brands.”

And during her more than 15 years at Walt Disney World, Norsworthy served in various leadership roles in marketing, sales and operations. Even early in her Disney career, her magic touch was apparent. When the Big Mouse himself hit retirement age in 1993, who did Disney tap to orchestrate his 65th birthday bash? Norsworthy, of course.

Little wonder that Norsworthy has been named one of the 100 Most Powerful Women in Travel (Travel World) – not once, but three times.

For someone with so many credits to her name, Norsworthy is refreshingly warm and down to earth in conversation. Asked to comment on the launch of Wizarding World in 2010, for which she led a cross-functional team involving marketing, sales and other departments at Universal Orlando, she immediately lights up. 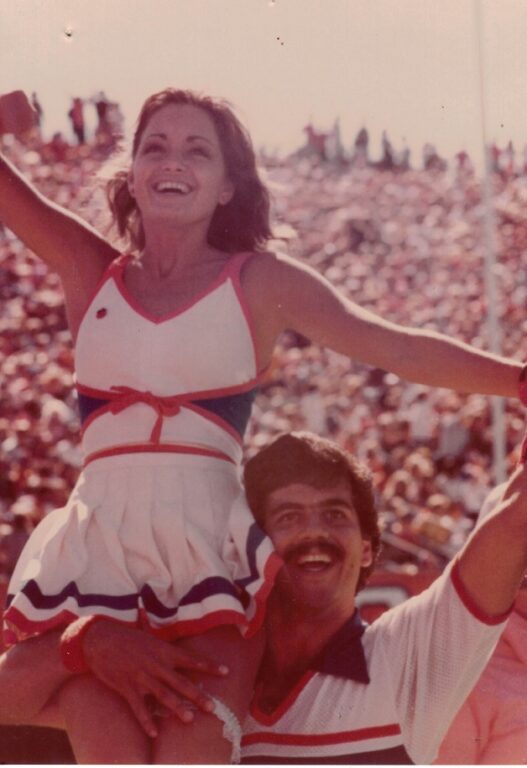 “Within the organization, we had many employees who were devoted Harry Potter fans, so it was a real labor of love bringing the project to life,” Norsworthy says. “We spent several years on it, working closely with Warner Bros. Films – it was a real team effort.”

Did she know how big a success Wizarding World would be?

“While we thought it would be popular, we couldn’t be sure until the day came and we saw people’s reactions,” says Norsworthy. “I’ll never forget walking through the crowds on opening day and seeing the expressions on people’s faces, how much joy they had.”

She adds: “It was such a privilege leading the team.”

Bill Davis admires Norsworthy’s readiness to acknowledge the contributions of others. “Alice is humble, but she is an outstanding leader,” he says. “She has no issues sharing credit.”

So, how did Norsworthy evolve her team-centered leadership style?

For answers, you have to rewind the clock to the late 1970s, when 16-year-old Alice and her family moved from Toledo, Ohio, to Boca Raton, Florida. The high school junior had some big decisions to make, ones that would set the course for her future career trajectory.

“Growing up, I always thought I would be in the arts,” says Norsworthy. “I felt encouraged and most inspired in the creative field, so when I went off to university, I naturally declared art as my major.”

UF was her “fallback school,” she admits, “but once I got there, I couldn’t leave.”

Not only was the College of Fine Arts (now College of the Arts) “welcoming and invigorating,” Norsworthy fell in love with UF’s social life and its robust spectrum of extracurricular activities.

“I was in a sorority, Delta Delta Delta, and that helped me connect to a group of people who became very important to me,” she says.

She also became a UF cheerleader and a member of Florida Blue Key, the UF honor society.

The game-changer came when she got involved in Homecoming.

“I was on the committee for Gator Growl,” she says. “What got me excited was the teamwork, the whole ‘Here’s a challenge and let’s solve it as a team’ thing.”

As the young art major pondered what she wanted to do for a career, a lightbulb went off in her head. “I realized that as much as I enjoyed the creative process, what I really enjoyed was leadership and the whole development process,” she says.

After graduating from UF, Norsworthy spent several years working in advertising and promotions in Central Florida, and in 1988 leaped into marketing at Walt Disney World. She blazed a trail upward at Disney, then Royal Caribbean, and now at Universal Orlando.

Looking back, it could be said that organizing Gator Growl was her practice run for a career of branding and promoting iconic, larger-than-life events. 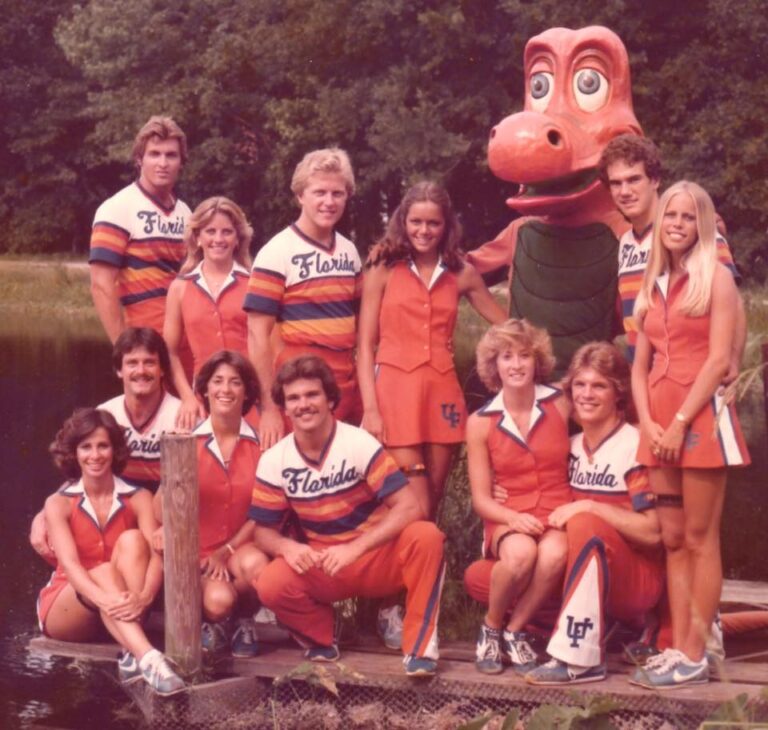 Alice (center), with her fellow Gator cheerleaders and an orange Albert, 1980

How does Norsworthy think UF influenced her career?

“Okay, I’m getting choked up,” she admits after a pause. “My experiences at UF gave me the confidence to pursue my dreams and a network of people to help me.”

In appreciation to her alma mater, Norsworthy and her husband, alum Joe Norsworthy, belong to the Central Florida Gators Club and Bull Gator Club and give generously to UF athletics. Alice Norsworthy has also served on the UF Foundation national board and been a member of the UF Alumni Association board. She currently serves as chair of the Eric Friedheim Tourism Institute advisory board, at the UF College of Health and Human Performance.

A Gator future may be in the cards for their daughter, Jackie Norsworthy. A junior and varsity lacrosse player at Lake Highland Prep, in Orlando, Jackie is “certainly looking at UF,” says her mom.

Bringing up Jackie has also made Alice especially aware of how crucial it is for children to have the right start in life. That belief inspired her to serve on the national board of Big Brothers Big Sisters of America, which transforms the lives of children facing adversity by pairing them with caring adult mentors.

“Giving of our time and support is very important for ensuring that every child has a chance at success,” says Norsworthy.

“Look,” she says, a catch of emotion in her voice, “I have been very fortunate in my life and so has my daughter, Jackie. She has lots of opportunities and resources, but a lot of kids don’t. Big Brothers Big Sisters helps those children and gives them the mentorship that allows them to create a better life.”

All young people, in fact, need inspiring role models as they look to launch successful careers. After all, there is no sentient Sorting Hat that students can put on to magically determine what career “house” they belong to.

Given that Norsworthy’s own professional path didn’t follow a straight line — she majored in art but ended up building a career in marketing and sales – does she have any advice for young Gators searching for the ideal career fit?

“You should take every opportunity to participate in shadowing programs and internships while you are in school,” she advises. “You need to understand what a job is like every day and match that to your personal passions.”

“Finding that intersection of what you’re good at and opportunity is how you can create a fulfilling and sustaining career.”

And, of course, there are always the words of Harry Potter himself to guide a young graduate.

As the young wizard says to Dumbledore’s army in Harry Potter and the Order of the Phoenix: “Working hard is important. But there is something that matters even more, believing in yourself.”