Where Manatees Are Feared, A Gator Offers Hope

Lucy Keith-Diagne is slowly changing the way people in Africa think about the manatee by including them in research and rescue efforts.

In Africa, the gentle sea cow is viewed as dangerous. But a UF graduate is determined to dispel myths and save the vanishing species.

A wicked woman is rumored to lurk in Africa’s mud-darkened lagoons, mangroves and rivers. Fishermen are said to die at her hands. Villagers warn children not to swim in her waters — she’ll drown those who dare.

It’s not crocodiles or hippos that stir the fear.

In eastern Senegal, where Lucy Keith-Diagne is based, there’s a belief that if a manatee breathes on you it will kill you.

“There are a lot of myths and legends about them,” she says. “People are very afraid of them.”

Occasionally, I’d meet someone from Brazil or Ghana working with manatees on a shoestring budget, and I thought that’s really what I want to do. That’s where manatees really need more attention.

Instead, protections are weak or not enforced. Poachers hunt them for meat. African manatees that are accidently caught in fishing nets are almost never released. River dams insolate their populations. Habitats are shrinking because of mangroves being cut for firewood, seasonal floodplains being converted to farmlands and urban growth on the coast. All of which puts the African manatee in jeopardy.

“They’re going to be eaten out of existence if that doesn’t stop,” Keith-Diagne warns. 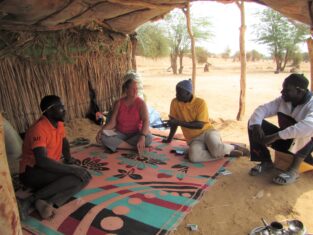 The trouble, in part, is the sea cow itself. Smaller than their Florida cousins, the African manatee is “secretive.” It swims in silence and is most active at dawn, dusk and night. Murky waters hide it from view — it’s hard for people to know when a manatee is just below the surface.

To save the manatee, Keith-Diagne and her husband, Tomas, created the African Aquatic Conservation Fund in 2014. Its focus is on research, preservation and educational outreach. Not just for the African manatee. Keith-Diagne’s small team also concentrates on turtles, marine mammals and other water creatures. It’s a tall order for such a large continent. The manatee’s range alone spreads across 21 countries. To manage, AACF relies on fellow scientists, volunteers and students, local communities and governments, charities and zoos.

The job, Keith-Diagne admits, can be daunting.

“Being in Africa is fantastic — the people, the culture. But it also has challenges,” she says. “It’s interesting, because I do love it … but I also see all those challenges. It’s a tough place to work.”

Birds were her father’s thing. One of New England’s most respected ornithologists, Allan Keith taught his daughter to delight in wildlife. So it was no surprise when young Lucy announced her intentions to work with animals, too.

“My family would tell you that I learned about manatees in seventh grade and came home and told my parents that I wanted to save them,” Keith-Diagne says.

That idea, to her at the time, seemed to be a wish on a rainbow.

“I grew up in New Jersey, so Florida seemed very exotic at that point in my life,” she says. “A manatee seemed as exotic as a lion — it was far away and something I thought I’d probably never see: this big underwater floaty potato animal, and they were gentle and plant eaters.”

But she did make it to Florida. And, as promised, she did help save the state’s manatees as a biologist for six years with the Florida Fish and Wildlife Conservation Commission. Then, in 2006, she moved across the Atlantic Ocean to specialize in the far-less-studied African manatees. And there she’s remained.

“I really wanted to work with manatees that aren’t as well taken care of as the ones in Florida,” Keith-Diagne explains. “Occasionally, I’d meet someone from Brazil or Ghana working with manatees on a shoestring budget, and I thought that’s really what I want to do. That’s where manatees really need more attention.” 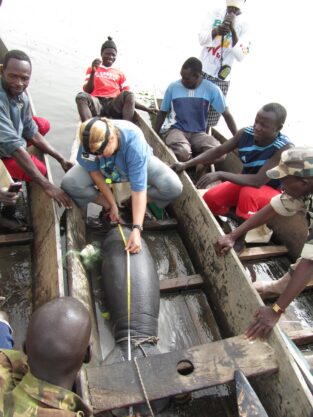 So when a colleague studying whales in Gabon, on Africa’s west coast, invited Keith-Diagne to work with manatees there, she jumped at the chance.

While it hasn’t been easy and can be frustrating — even heartbreaking — there are really good days. Like the time her team rescued and raised an orphaned manatee calf. It took three years before it was mature enough to be released back into the wild. Which meant three years of almost constant care; three years of dragging supplies to a remote lagoon in southern Gabon where the calf lived; three years of her team taking turns watching over the little manatee.

The wonder, Keith-Diagne says, is manatee babies usually don’t survive without their mothers. When this one was found stranded on a beach, he was put in a bathtub in hopes of a miracle. A few days later, he was still alive. He was named, fittingly, Victor.

Other good days are wrapped in the moments when children first “meet” manatees during educational outreach events.

“I’ll show them pictures of manatees in the water, and their faces light up,” Keith-Diagne says. “Kids the world over love animals, and I love to try to inspire them to care so they become adults who love animals and want to protect them.”

She hadn’t planned on being Gator.

Then again, Keith-Diagne hadn’t really imagined that a career working with manatees was feasible either. Wolves in Minnesota, she used to think, were more likely — maybe she’d be a park ranger. But then opportunities to work with penguins in Antarctica and monk seals in Hawaii came along. And, finally, with manatees in Florida … and later in Africa.

“I never thought I’d end up in Africa,” she says. “I always knew I wanted to work with animals, but I never imagined this would be the direction it would go.” 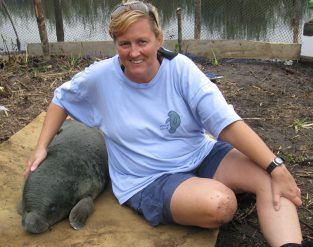 One of Keith-Diagne's successes was raising the orphaned calf Victor and releasing him back into the wild.

The University of Florida was an equal surprise. Keith-Diagne was three years into her work with the African manatee when Ruth Francis-Floyd, director of UF’s Aquatic Animal Health program, and now-retired professor Charlie Courtney encouraged her to come to UF to earn a Ph.D. That was 2009; Keith-Diagne was 45.

A doctorate degree hadn’t been on her radar. After all, it had been a long time since she’d received a bachelor’s in biology at St. Lawrence University in New York in 1987 and a master’s in marine biology from the Boston University Marine Program in 1999. But the chance to learn more about the African manatee’s ecology and genetics was too tempting to pass up.

Nowadays, Keith-Diagne — who was named a UF College of Veterinary Medicine Distinguished Alumnus last spring — is the world’s leading expert on the elusive African manatee. She’s trained close to 100 African biologists and started a network for manatee fieldwork and conservation involving 19 countries on the continent.

But there’s much more to do, she insists. Africa needs more scientists. There are no facilities for injured manatees, no rescue centers, and few wildlife genetics labs in West or Central Africa. There aren’t enough opportunities for college interns, either. (Her hope is to someday host an internship program at the African Aquatic Conservation Fund that includes UF students.) And the list goes on.

“We need more conservationists out there,” Keith-Diagne says. “We need people to study the planet and to try to fix the things we’ve screwed up.”

You’ve worked with endangered animals in both the U.S. and in Africa. What’s it like trying to save a species from extinction?

“I find it gratifying, but the clock is ticking — we have to try new things. When I worked with Hawaiian monk seals, my boss had a picture of a California condor on the wall. The picture was there to remind him that we can’t wait until it’s too late. We have to think out of the box. It might not always be biology; it might be cultural.”

With the high rate of extinctions taking place today, how does that change how you do your job?

“We can’t sit back and be hypothetical and do lot of modeling. It’s real. We have to act on things because the situation can be dire. We have to get people to care.”

What do you wish more people knew about wildlife, especially endangered animals?

“It’s great that there’s a lot of interest in endangered animals, but people need to understand that wildlife needs to be wild. People want to grab them and hold them and pet them and take pictures with them — that’s not what we should be doing to wildlife. Let them be. I find it disturbing when someone tries to get a selfie of a bear in Yellowstone and the bear is killed because it gets too used to humans.”

When you think about the future of the animal kingdom, what’s your best, most realistic hope?

“We need to pay more attention to the oceans. If we don’t clean up our oceans and protect fish and other animals, we’re going to lose a lot more life. It’s really hard to be optimistic, I have to say.”