It Takes a Village

Through his former company AlterEco, Edouard Rollet helped remote agricultural communities, such as this quinoa farm that borders the Uyuni Salt flats in the South Altiplano region of Bolivia, make profits that sustain their entire village.

Edouard Rollet finds success in business by seeking out – and appealing to – the good in humanity.

From a crowded coffee shop in Vietnam, soft-spoken Edouard Rollet (MAMC ’01) talks via his cell phone, occasionally raising his voice to be heard over the hum of nearby conversations and passing cars. The co-founder and former CEO of Alter Eco Americas, along with his business partner, Mathieu Senard, recently sold their company for an undisclosed amount. He says he didn’t intend for that venture to make anyone wealthy.

After all, “I believe in altruism,” he says.

UF was one of the top public universities for journalism. I appreciated the way campus was set up and the way you can be dedicated to your studies.

Through Alter Eco, Rollet and his business partners found a way to manufacture fair trade “delicious, nutritious and environmentally responsible” products, such as chocolate snacks, while simultaneously helping former drug trade farmers refocus on new crops: cocoa beans in Peru, rice in Thailand and India, hearts of palm in Brazil, quinoa in Bolivia, sugar in the Philippines, tea in India, Sri Lanka and South Africa, and coffee in Peru, Mexico and Ethiopia.

Over 15 years, his efforts transformed farm after farm, family after family. His work established or grew more than 40 farming co-ops in 35 countries, giving more than 30,000 farmers and entire remote villages power over their own destinies – a previously unattainable feat that will continue to be felt by community members for generations to come.

Now, Rollet says he hopes his earnings will help him solve other global problems. Chief among them: product packaging waste. At Alter Eco, his team has created non-GMO, plant-based, compostable chocolate truffle wrappers and stand up pouch packaging for grains, such as quinoa.

But for now, in these few minutes before he meets with a Vietnamese environmental preservation government official, he shares a few stories about his humble start.

From France to Florida

In the 1990s, with an MBA in hand from The European Institute of Business, Rollet decided to study journalism in the US.

He made his decision after a year of traveling throughout Asia, including a stint volunteering at a Cambodian orphanage.

“I wanted to tell the stories of where I’d been,” Rollet says, “and share with the world stories about the lifestyles, challenges and generosity of people who live on dollars a day. Journalism was a way for me to get those stories across.”

A scholarship through the Florida-France Linkage Institute, created by the Florida Legislature in 1989, provided the avenue he needed.

“It was a big step at the time,” Rollet says. “Leaving everything behind was not common.”

The scholarship offered flexibility: he could select a degree path at any of Florida’s state universities. He chose a journalism bachelor’s degree program at Florida International University first. Then, a master’s in journalism from UF because “my English needed a little more work.” He was 24 when he arrived in Gainesville. 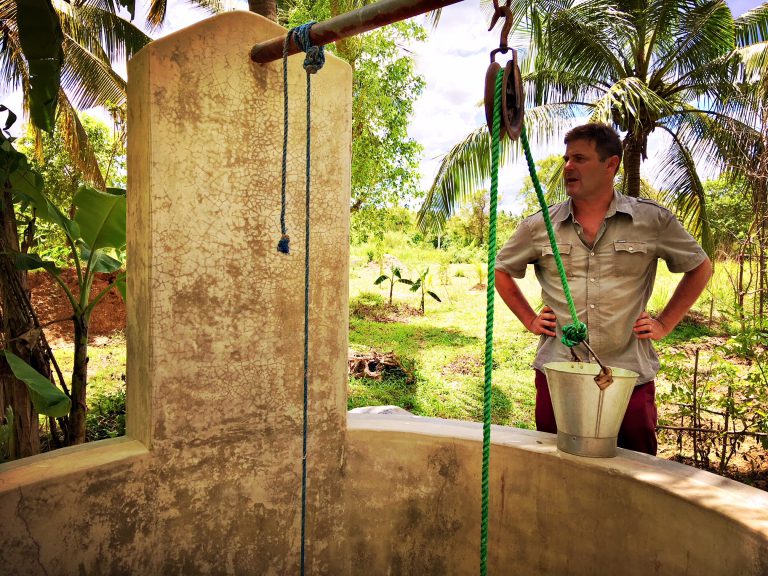 Rollet says the Florida Fly-Ins program at UF gave him unique insights that he still relies on today, while traveling the world to meet with farming communities that truly benefit from his company's investments. Here, he is pictured on a coconut farm in Kerala, India, where farmers must draw irrigation water from this well.

“UF was one of the top public universities for journalism,” he says. “I appreciated the way campus was set up and the way you can be dedicated to your studies.” And, he said, the faculty were excellent. Among his favorites: telecommunications professor Michael Leslie for his teaching on world inequalities, economics and politics in the developing world.

Rollet says the College of Journalism and Communications’ Florida Fly Ins program, where students travel to an international city or village and report on the issues through the eyes of locals, was another highlight of his UF education. Professor John Kaplan took Rollet’s class to Costa Rica, where Rollet interviewed locals who worked in five-star hotels, but “lived in dirt – in very rough conditions” beyond the hotel’s back lot fence. The experience shaped him.

“At Alter Eco, I ended up telling stories not through press articles or the media, but through food,” Rollet recalls. “When we first started selling quinoa and other food products in the U.S., we could tell the stories of the indigenous farmers and other villagers through food.”

Blueprint for changing the world

When Rollet graduated, he moved to New York. But the September 11 terrorist attack and the ensuing 2001 recession left him and thousands of other college graduates struggling to find work. Rollet found a position at the French Embassy in New York, eventually becoming a fulltime senior trade attaché, specializing in foreign investments, new ventures, media, marketing and mass retail.

“Pieces of the puzzle started coming together,” he says.

In 2005, Rollet, along with Tristan Lecomte in France, Mathieu Senard in California and Ilse Keijzer (whom he later married) in Australia, formed Alter Eco Foods. The concept of fair trade commodities was still fairly new.

“The issue with fair trade is that the price of one pound of coffee in the US was .72 cents, but it cost the farmer .92 cents to grow,” says Rollet. “Farmers worked so hard, but when they go to bed at the end of the day they are poorer than when they started.”

From his Embassy work, Rollet knew this issue was rampant worldwide, from rice farmers in Thailand and India, to sugar farmers in the Dominican Republic, the list was too long.

“Our thinking is that if we want to make a real impact for these farmers, we need to sell a lot of volume,” he says. “To sell a lot of volume, we needed to work with supermarkets and mass retail chains.” So the partners set up Alter Eco to maximize the impact of fair trade products. They settled on eight categories of products, including tea, coffee, rice, olive oil and chocolate. As their business evolved, chocolate became their main focus. 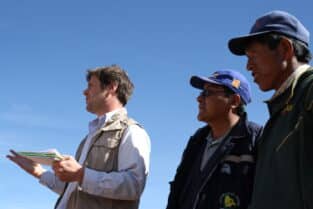 Edouard Rollet conducts a crop audit of these farmers’ quinoa fields near the Uyuni Salt flats in the South Altiplano region of Bolivia.

While a few companies were working with these remote farmers as individuals, Rollet and his partners found greater success by forming co-operatives with whole villages.

“At the end of the year, the farmers collectively decided what they wanted to do with their profits and the premiums Alter Eco paid – improve their roads, build a nursery, build a factory, and so on,” Rollet says. “It had a bit of a snowball effect.”

Rollet and his partners said the co-ops seemed like a natural next step after the United Nations Development Programme stepped in to help free the farmers from oppressive drug lords who forced them to grow drug trade crops.

“We were [the farmers’] first customers after the UN intervention,” Rollet says.

The shift from growing coca (cocaine) plants to cacao, the main ingredient in chocolate, wasn’t such a stretch for the farmers, Rollet said. However, working with international markets to sell their harvested cacao was a stretch. Rollet facilitated those connections, and in just a few years, Alter Eco became the fourth largest organic chocolate brand in the US natural food space. Credit, Rollet says, goes to their 35 small investors in France, who included a dentist, a monk and a tax collector, as well as impact investors in the U.S.

Taking Alter Eco to the next level would require an even larger investment.

“Most companies sell to large conglomerates and lose their mission,” Rollet says. “We didn’t want that. Our challenge is that we have a long-term view for the financial world, that is, beyond the typical three-to-four-year cycle.”

Private equity firm NextWorld Evergreen bought AlterEco in late 2017. Part of the deal was that NextWorld create a foundation for all those communities who are now part of the AlterEco family.

Next up: plastic waste

From that Vietnamese coffee shop, far from his home and family in Mill Valley, California, Rollet said his next business ventures are already going well. Second Life addresses plastic waste, Climate Plus is a carbon offset-negative project and 1Pledge helps cities and consumers reduce emissions.

“There is quite a lot to do for sure,” says Rollet, who has since been the focus of many articles and stories about the business world’s more altruistic companies.

Second Life is already off to a running start, with the aforementioned plant-based wrappers for Alter Eco’s chocolate truffles already considered a success. But Rollet said success is not necessarily measured in more customers. What’s important is addressing plastic waste. NextWorld Evergreen “is aligned with us” in this regard, he says.

As Rollet prepares to meet with a Vietnamese official who might be able to help him in his quest, he shares his gratitude for the north central Florida college which honed his craft and shaped his passions.

“When I set out to do some things I really wanted to do as an entrepreneur, I am grateful to have studied” [at UF], he says. “You can call it the power of naiveté, but when you have a dream and you know it’s the right things to do, it works out.”