Married couple Bonnie Avery, Ph.D., and Chris McCurdy, Ph.D. (shown here examining the herb kratom) enjoyed a fruitful partnership inside UF’s Translational Drug Development Core facility, which they codirected, as well as at home and on their frequent travels for business and fun. Since Avery’s passing in 2019, McCurdy has carried on her research and honored her legacy with an endowment for Ph.D. students – especially women -- in pharmaceutical sciences.

They were linked in the lab and in love, a couple devoted to cutting-edge pharmaceutical research and to each other. Bonnie Avery’s untimely death stole much, but her husband has ensured her legacy survives.

They met in a lab.

The year: 2001. The place: University of Mississippi. Both were professors in the School of Pharmacy, overseeing million-dollar research projects and promising graduate students. Both were committed to alleviating human suffering through science.

Over the years, their friendship and mutual respect deepened. By the end of the decade, they realized they weren’t just colleagues, they were soulmates.

Married in 2010, Chris McCurdy, Ph.D., and Bonnie Avery, Ph.D., combined their formidable scientific expertise – he in designing drugs to treat pain and addiction, she in drug analysis and how drugs move through the body – to conduct cutting-edge research on natural compounds, most notably the herb kratom.

She was the definition of a lifelong learner, and above all, a champion of women in the sciences.

In 2017, the UF College of Pharmacy recruited McCurdy and Avery as preeminence hires to create and launch its new Translational Drug Development Core facility, at the Clinical and Translational Science Institute.

“She often said it was her dream job,” said McCurdy, the facility’s director and a professor of medicinal chemistry, in a recent interview. “She was so excited about the future and what we were going to be able to accomplish and how we could help so many people.”

Then, out of the blue, in November 2018, Avery was diagnosed with gallbladder cancer. What doctors initially predicted would be a “100% curative plan” with chemo turned into a rapid spiral downward, and the vibrant 59-year-old passed away on March 14, 2019 – just four months after her diagnosis.

McCurdy spent those four months in shock. But he observed how Avery’s love of science and teaching remained undimmed – right to her final days. 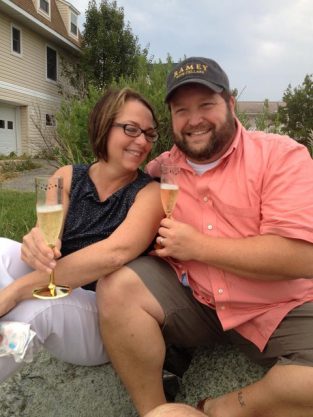 “The week that she passed away, she met for three hours with her lab over Zoom,” he said. “We had long discussions where she taught me how I should look toward the future without her, both professionally and personally.

“Her spirit really, really shone through.”

“She was intelligent, tenacious, fierce and very caring,” says former student Tamara King, Ph.D. “Cancer took her away from us too soon.”

The fellowship supports Ph.D. candidates in pharmacy, particularly women – a cause close to Avery’s heart, and now McCurdy’s.

“She was the definition of a lifelong learner,” said McCurdy, “and above all, a champion of women in the sciences.”

From Single Mom to Pharma Force

Future recipients of the Dr. Bonnie Avery Advancing Women Fellowship may only associate the award’s name with that of a brilliant UF scientist. But to those who knew her, Avery was much more.

“She was inquisitive, always asking questions, always interested in other people and what kind of geeky science they were doing,” said McCurdy. “She was incredibly supportive — a wonderful mentor to students and postdocs, faculty and staff alike.”

Former student King concurs. “She showed me I could go as high as I set my mind to,” said King. “Whatever setbacks I had in graduate school, she was there to make sure I did not give up.”

Avery keenly understood the value of such support because she herself had experienced its polar opposite: In the 1990s, as the single mother of two young children, she put herself through a doctoral program at the University of North Dakota, in her home state.

“She worked her butt off to get a Ph.D. in analytical chemistry,” said McCurdy. “It was a challenge because, at the time, there weren’t a lot of women in the pharmaceutical sciences. It still is a male-dominated profession.”

Despite those obstacles, she rose to the top.

She showed me I could go as high as I set my mind to. Whatever setbacks I had in graduate school, she was there to make sure I did not give up.

During Avery’s 21 years as a faculty member at the University of Mississippi School of Pharmacy – and for a year and a half at UF – she served as principal investigator or co-principal investigator on grants and contracts totaling more than $40 million. Among her topics of inquiry were drugs to treat substance abuse and misuse, antimalarial drugs, botanical dietary supplements and, early on, antimicrobial agents from sea sponges.

Avery’s skill at analyzing complex chemical compounds was a “huge strength” when she pivoted to pharmaceutical work, especially the study of how drugs are metabolized, said McCurdy.

“She was really gifted at being able to develop methodologies to separate multiple compounds within complex natural products, botanicals and dietary supplements,” he said. “And she passed that skill on to the students in her lab,”

Chemistry Outside the Lab

Avery’s analytical skills paired brilliantly with McCurdy’s expertise in developing new drugs for pain relief and addictions when the two began collaborating at Ole Miss in 2005. At the time, each was married to another person.

“Then both of us went through difficult divorces,” said McCurdy. “We realized we enjoyed each other’s company a lot more than just at work and at the occasional dinner parties that we’d have, ironically, with each other’s ex-spouses.”

“It’s weird the way fate works,” he laughed, recalling the events leading up to their 2010 marriage.

In 2015, UF recruiters tried to lure McCurdy alone to Gainesville. No way, no how, he told them; he and Bonnie were a package deal. As he explained her unique gifts and skill sets, the College of Pharmacy reps became intrigued. 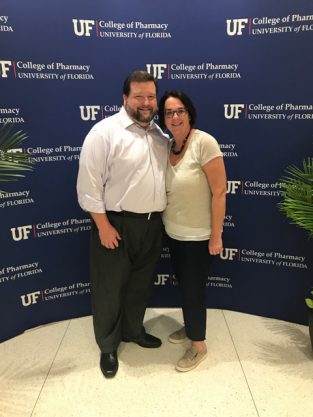 Chris McCurdy’s and Bonnie Avery’s individual expertise merged beautifully in their collaborative research on natural compounds, especially the herb kratom. This photo was taken at UF’s Health Professions, Nursing and Pharmacy Building on September 17, 2018, about six weeks before her diagnosis with gallbladder cancer.

“They actually seemed to be more interested in her!” he said.

A year and a half later, UF offered the couple joint directorship of UF’s first-ever translational drug development facility.

“We both looked at each other, and we just had smiles ear to ear,” McCurdy remembered. “It was truly the opportunity of a lifetime.”

At UF, McCurdy and Avery resumed the intensely fruitful working partnership that was the hallmark of their life as married academics – driving to the university together, working alongside each other in the lab and continuing their work at home through the evenings.

They pursued some of their research projects individually but made sure to attend the same academic conferences – particularly those held near outstanding wine-growing regions, which they loved to visit.

“We traveled the world together – Argentina, California, Portugal, Greece, France,” said McCurdy. “We both loved the food/wine-pairing thing.”

McCurdy acknowledges that being together 24/7 might not be right for all married couples, but for him and Avery, it was ideal.

“It was a gift that I was able to spend the time that I had with her,” he said.

“In her last days, we joked that we were only married for what would have been nine years, but it felt like 50 years because of how much we were together.”

Avery and McCurdy pioneered remarkable research studies, some of them still ongoing. Their current grant projects include studies of non-opioid-based pain management, using kava to reduce tobacco use among African Americans, and therapeutics for prostate, breast and skin cancer.

Most notably, Avery and McCurdy spearheaded the first NIH-funded scientific study of the pharmacology of kratom – a tropical evergreen tree from Southeast Asia whose leaves have been used for centuries to relieve chronic pain. Depending on how the leaves are prepared, kratom can have stimulant, analgesic or opioid-like effects, and users and doctors vary widely in their opinion of the herb, calling it everything from a beneficial, harmless lifesaver to a dangerous addictive drug. 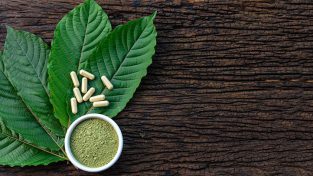 During the last months of her life, Bonnie Avery was gratified to learn that the NIH’s National Institute on Drug Abuse had awarded her and Chris McCurdy a two-year, $3.4 million award to pursue groundbreaking research into kratom, a pain-relieving herb that holds promise for treating drug addictions.

(In 2016, the DEA tried the ban the elements in kratom, but it backed down after strong backlash from kratom users and members of Congress.)

McCurdy and Avery’s study seeks to identify the pharmacology of kratom’s 40 different alkaloids and test their effects on the brain’s receptors. From these results, researchers will develop treatment strategies to wean addicts off heroin and other opioids.

In the last months of her life, Avery was gratified to learn that the NIH’s National Institute on Drug Abuse had awarded her and McCurdy a two-year, $3.4 million award to pursue this groundbreaking research. Some of the research support comes from the NIH HEAL (Healing End Addiction Longterm) initiative.

Since Avery’s passing, McCurdy has continued the study with principal investigator Lance McMahon, Ph.D., along with several students Avery trained — Erin Berthold, King and Abhishek Sharma, Ph.D. The latter two came with Avery and McCurdy from the University of Mississippi to Gainesville as a post-doc and graduate student respectively; just before Avery passed away, Sharma was promoted to assistant research professor at UF.

“Erin, Tamara and Abhishek are fantastic representatives of who she was and have really helped me carry on that portion of my life,” said McCurdy.

Likewise, the Dr. Bonnie Avery Fellowship will carry forward Avery’s teaching legacy and commemorate her ties to Florida’s flagship university. It is what Avery would have wanted, said her husband.

“She was so happy here and felt like this was the greatest job she had ever had,” said McCurdy. “She felt the support from all the faculty and staff and the administration – and even, with the global conferences we attended – from the greater Gator Nation.”

“With this fellowship and her students, it means a lot to me,” added McCurdy. “Because even though she’s not here, she’s here.”

Advancing Women in the Sciences

The Dr. Bonnie Avery Advancing Women in Pharmaceutical Sciences Endowment that McCurdy funded in honor of his late wife is designated for special recipients: Ph.D. students in pharmaceutical sciences who have successfully completed their qualifying exams and are embarking on the research phase of their doctoral work.

“We want to reward those students who are the cream of the crop, so to speak,” explained McCurdy. “This will give them a bit of extra fellowship support as well as the prestige of a named award.” Despite the endowment’s name, recipients do not have to be women.

McCurdy’s initial gift partially covers one or two pharmacy students each year, but he has a vision: He would like to see the endowment grow so it can give students a full ride. He invites anyone who supports women’s advancement in the sciences to make a gift to the fund.

“I would be thrilled,” he said.

Very soon, the UF College of Pharmacy will name the first Dr. Bonnie Avery endowed fellow. McCurdy is already anticipating the emotion of that event.

“The first couple recipients will probably have known her because she was a faculty member when they entered the program,” he said. “How awesome it will be for them to have this endowment in her name, carrying her work forward.”

To donate to the Dr. Bonnie Avery Advancing Women in Pharmaceutical Sciences Endowment, visit https://www.uff.ufl.edu/giving-opportunities/024109-dr-bonnie-avery-advancing-in-pharmaceutical-sciences/ or contact Elizabeth Zipper at Zipper@cop.ufl.edu or (352) 281-3341.