Phuong Nguyen, the first in her family to attend college, is soaring higher than her Vietnam War-era parents ever could have imagined.

A daughter of refugees and the first in her family to attend college, this Gator is determined to take every opportunity America offers, and to ensure others can, too.

It’s here a once-penniless Vietnamese-American is staking her claim as an entrepreneur. Long shot that might be, daring the odds is nothing new for Phuong Nguyen. She’s been doing it all her life.

In the early ’90s, when Nguyen (pronounced “Wen”) was a toddler, she and her parents were refugees — three of hundreds of thousands who resettled in the United States in the decades since the Vietnam War. Orlando became their home, the little girl in a brand new land, in time, the family’s translator and representative. There was no choice.

If I can pick one thing to have an impact on, it’s giving people who don’t have the resources the opportunity to get an education so they create their own meaningful future.

“My parents could make out a couple sentences here and there and say one or two phrases in English, but nothing more,” Nguyen (BSBA ’14) explains. “All through my childhood, I was working with them to navigate a lot of bureaucratic systems. I learned what boundaries were and how to push those boundaries; and I learned how to fix problems and ask for forgiveness later.” 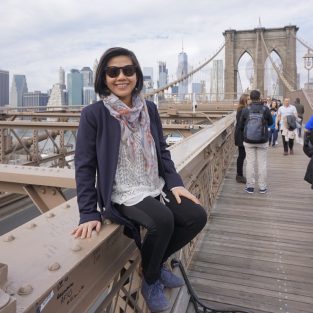 UF degree in hand, Nguyen’s job with Deloitte brought her to New York City. Not long after, she started a business of her own there. (Photo courtesy Phuong Nguyen)

That moxie is a big reason she had the courage to start a New York-based business in 2018, using money saved during her job with Deloitte and investments made starting in her college years. Her consulting firm, Partners in Company, blends strategy, data modeling, storytelling and design to help companies create better user experiences and government agencies to transform burdened processes.

“Having so much responsibility as a child pushed me into the waters of having to figure things out,” she says. “It was difficult, but now I think it was a blessing in disguise. I had to get over any hesitations to do what needed to be done, and just dive right into it to make it happen or make it work. That translated into jumping into new and experimental future career opportunities.”

Her surprise is how far she’s come.

“I’ve been able to mold my own path, and that’s been liberating,” Nguyen says. “I find it quite surprising that I became an entrepreneur and took this risk to build the life that I really want — I’m following a path that I’m passionate about. Being a new company isn’t always rainbows and roses, but it is enjoyable knowing I can build my own journey and connect ideas that can potentially become massive innovations.” 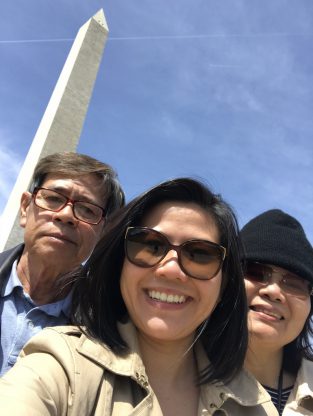 Despite their humble lives, Nguyen’s parents inspired their daughter to reach for her own greatness. (Photo courtesy Phuong Nguyen)

Thanh Nguyen, Phuong’s father, had been a soldier for the South Vietnamese when the Viet Cong first took him prisoner — the second time was when guards caught him trying to escape a reeducation camp. For 10 years he remained a POW, a pawn in a war between cousins. Meanwhile, to avoid unrest in her hometown, Ho Chi Minh City, and across the countryside, Phuong’s mother, Phuong Huynh, tried to flee the nation on a fishing vessel but failed. Her punishment: a short jail sentence followed by a life of poverty in her grandmother’s rural village. It was Thanh Nguyen’s grandmother who eventually introduced the pair. Marriage and a daughter soon followed.

“They had a tremendously difficult life before we came to America,” Nguyen says of her parents. “Knowing where they came from and the (slim) possibilities of that beginning leading me to where I am now, I’d be remiss if I didn’t take every opportunity that being in America and at the University of Florida gave me. I feel a responsibility to make every opportunity worthwhile and to pay it forward.”

In Orlando, Thanh was a factory worker at a food processing plant, repaired upholstery at a boat manufacturer and was later a school janitor. His wife worked as a seamstress, then a cosmetologist at a nail salon. For their daughter, the Nguyens wanted more. That, the couple knew, required schooling.

Nguyen, bright and curious and studious, welcomed the class assignments, the tests and the homework. At University High she was an academic star — at UF, unstoppable. She was a Machen Florida Opportunity Scholar and Reitz Scholar. The business college named her a top 100 sophomore. She won UF’s 2014 Outstanding Leader Award. And when her college career ended, Nguyen received one of UF’s highest honors: induction into the university’s Hall of Fame.

“Whatever situation we faced — if we were struggling financially or anything came to be a hurdle — my father’s main priority for me was to get an education,” Nguyen says. “He always told me, ‘If others can do it, you can do it too.’ He knew we didn’t have much, but every year when I started school he’d say that to me, and I believed him.

Nguyen is forever grateful to her parents for their sacrifices, she says, and for helping her “believe in the art of possible.”

“There wasn’t too much opportunity for them,” she says, recalling that her first year in the workforce her salary was triple what her parents together made annually. “But they did whatever they could so I could have opportunities. Their ability to remain optimistic in any circumstances — that’s something I hope I’m able to do.” 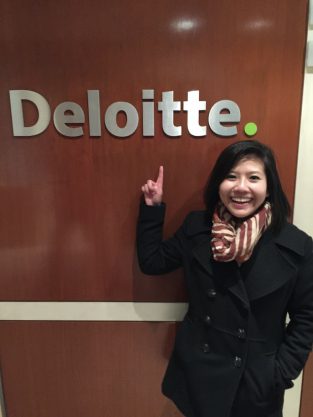 While it was her old job with Deloitte that brought Nguyen to New York City, it was the Big Apple’s culture, excitement, history — and other Gators — that kept her there.

“I’ve been in New York a couple years now and I’m loving every minute of it,” she says.

But it wouldn’t have happened, she insists, without her alma mater and her fellow alumni. During her years as an undergraduate and since graduation, Gators have encouraged her to seize each moment.

“I’m extremely grateful for everyone I’ve met at the university, from the professors I had to all the counselors and administrators. They were the ones who let me see what my potential was,” Nguyen says.

Grit, she promises, would have gotten her through UF even without her Machen Florida Opportunity Scholarship, even if it meant working full-time and taking classes between job shifts. She was that determined, that eager to be a Gator.

“I knew I was going to college, no matter what,” she says. “If I had to take on some extra obligations to do so it was still going to happen.”

The Opportunity Scholarship, though, changed her UF experience — and, she says, her life. Specifically for first-generation college students from Florida’s lowest income homes, the scholarship allowed classes to be Nguyen’s main focus. There was also time for extracurricular activities, additional academic pursuits and campus leadership positions.

Now, years removed from Gainesville, she hasn’t forgotten what that scholarship meant to her. Because of that, Nguyen takes time to give back to the Machen Florida Opportunity Scholars program. A member of its leadership council, she encourages other alumni to support it, and, to that end, has contributed regularly to the program since graduating. 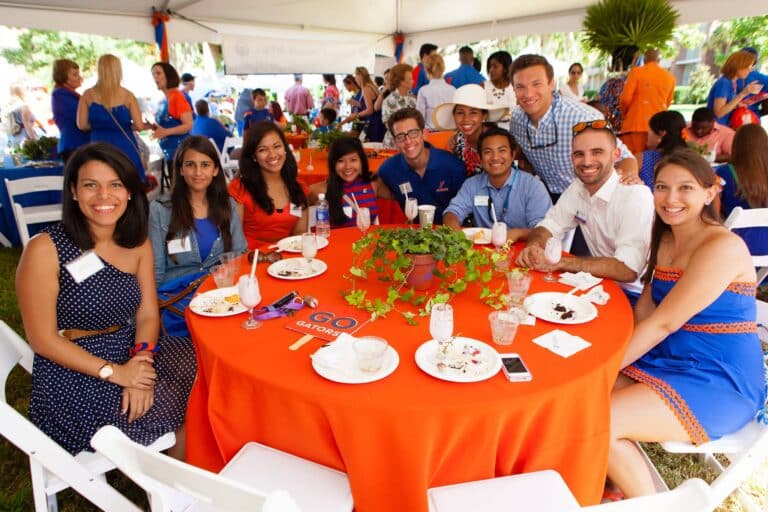 “The scholarship eliminated a lot of hurdles,” says Nguyen, UF’s 2020 winner of the prestigious Academy of Golden Gators young philanthropist award. “It allowed me to focus on building impactful relationships, make memorable experiences and explore my curiosity — all of which are foundational pillars that I attribute to my growth.

“I have an underlying feeling of gratitude,” she adds. “That’s why I focus so much on giving back to the university. If I can pick one thing to have an impact on, it’s giving people who don’t have the resources the opportunity to get an education so they create their own meaningful future.”

Another reason for her support, Nguyen admits, is to honor her parents and the values she learned from them.

“They were very proud that I was able to have a career in corporate America,” she says, “but they’re blown away by how much an education was able to get me.” 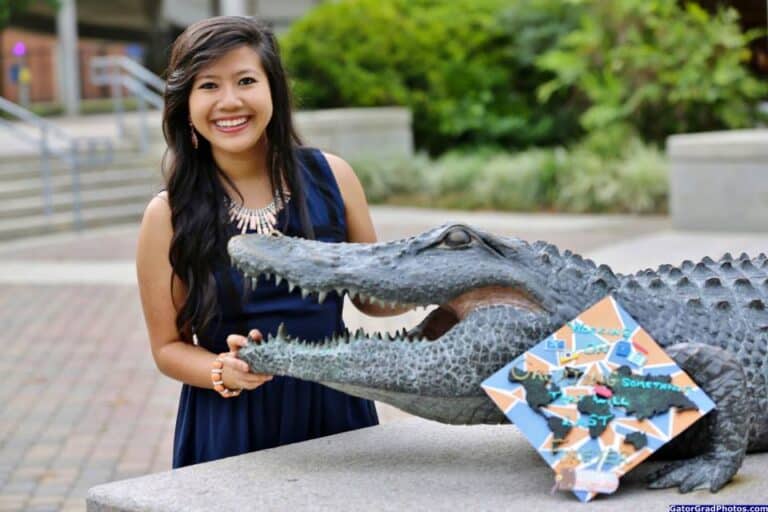 While at UF, Nguyen was a student leader and among the top scholars in the business college.