Chris and Kristine Boyett are part of a sprawling family of UF grads. But they’re doing their best to ensure college is an option for others’ children as well.

You might say alums Chris Boyett (BSBA ’88, MBA ’88, JD ’91) and Kristine Boyett (BA ’88) are quintessential “people people” – warm, sociable and liable to laugh if you crack a joke. But spend some quality time with the Miami couple, and you realize something deeper: The Boyetts are people who value other people – and that starts with nurturing future generations.

We have a passion for helping students. You want the best for them, and that includes helping them put their best foot forward when they apply for jobs.

Advocacy is their way of ensuring each new crop of Gators has the “full UF experience,” they say, which includes success during and after college.

“We have a passion for helping students,” says Chris, a nationally recognized estate-tax attorney with Holland & Knight. “You want the best for them, and that includes helping them put their best foot forward when they apply for jobs.”

“Guidance means everything,” agrees Kristine. “Even just one person, with the right advice, can make a big difference in your life.”

Born one year apart in Miami in the mid-1960s, Chris Boyett and Kristine Simon (along with her twin sister, Kimberly) grew up in different circumstances: Chris’s father was a physician, the twins’ dad was an elevator mechanic. But both families instilled in their children a strong work ethic and a respect for higher education. 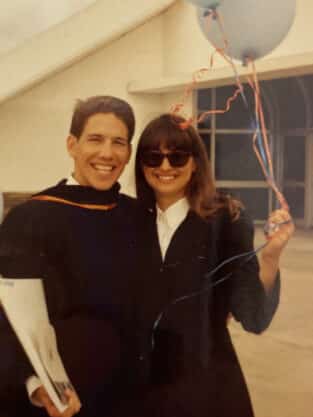 With Kristine at his side, Chris proudly became a triple Gator in 1991 when he earned his juris doctorate from UF’s Levin College of Law. Studying with Levin’s “excellent” professors inspired Chris to make estate tax law his specialty, he says.

Kristine’s early interests included reading, dance and roller-skating; Chris was into athletics. Their paths converged in the early ’80s at Miami Killian Sr. High School, where Chris played on the football team and Kristine was a cheerleader.

Always observant, Kristine and Kim began to pay attention to their classmates’ plans for college; the top students were applying to one school in particular.

“The students who were applying to UF were well-rounded and smart and pretty darn good kids,” she says. “My sister and I wanted to be part of that.”

Like his older brother, Chris was accepted at Vanderbilt University. But something told him he’d feel “more comfortable” at UF, he says.

“Florida allowed me to come into my own,” he says. “And certainly Kristine being there the next year was a strong draw.”

(Both twins were accepted, with Kim going on to earn a bachelor’s degree in business administration from UF in 1988.)

Gainesville in the 1980s was a town reinventing itself. A vacant post office downtown found new life as the Hippodrome State Theatre; the Oaks Mall doubled in size; Weimer Hall and Marston Science Library sprung up on campus; and basketball fans bid farewell to “Alligator Alley” and began cheering the Gators at the O-Dome.

As undergrads, Chris and Kristine immersed themselves in UF academic and social life. Chris’s time was mainly spent at the (now) Warrington College of Business, where he majored in finance. In his junior year, he aced the GMAT and became eligible for the college’s joint BS/MBA program; his progress was so good, he was on track to graduate with both a bachelor’s and a master’s degree in finance by 1988.

Kristine found her tribe at the College of Liberal Arts and Sciences (CLAS), where she majored in sociology – specifically, cross-cultural examinations of marriage and family. In contrast with her required courses back in high school, the diverse CLAS offerings were a breath of fresh air, she says:

“I loved CLAS because it had eclectic options for study,” says Kristine, “everything from anthropology to sociology to writing classes.”

In their downtime, Chris and Kristine formed a dog-walkers group and enjoyed Gainesville’s thriving music scene, attending concerts at the Reitz Union by Jane’s Addiction, Love and Rockets, and other alternative rock bands.

From Gordon Gecko to Triple Gator

In fall 1987, Chris donned his best suit and flew to New York City for interviews with investment firms. The plan was to become one of the suspendered yuppies powering the Wall Street boom era.

“Remember, that was when the ‘Wall Street’ movie came out,” says Chris, “There had been a really positive stock market.”

As financial markets reeled worldwide, Manhattan investment firms were no longer keen to hire the next Gordon Gekko – or, in Chris’s case, Gordon Gator.

Taking his dad’s advice – Get as much education as possible – Chris pivoted from finance and applied to UF’s Levin College of Law.

“I liked education, I liked being in Florida, I liked learning, so if you tell me I can stay at UF and get more education, I’m fine with that!” he laughs.

In 1989, Chris and Kristine married and settled in Gainesville, renting an apartment one block from The Swamp. Kristine began working as a kindergarten assistant at Brentwood Elementary School, and Chris dug into his law studies. Tax law, in particular, attracted him, not only because of the subject matter but because of the people.

“The students who take tax [law] have a greater tendency to be more collaborative,” observes Chris, who is now an adjunct professor in the Graduate Program in Taxation at the University of Miami. “Not that tax students aren’t competitive – every law student is competitive – but they have a strong tendency to work with each other.”

Likewise, his UF tax law professors stood out as being knowledgeable and “really nice people,” he says, citing as key influences professors Dennis A. Calfee and George K. Yin. (The latter then went on to serve as chief of staff for the U.S. Joint Committee on Taxation from 2003 to 2005.)

“If you deal with people that are excellent and you’re so enthralled with how good they are as professors, it increases your connection to that space,” he explains.

Armed with his juris doctorate, Chris took another stab at Manhattan in 1992 when he moved with Kristine to study in NYU’s Graduate Tax Program; there, Kristine served as assistant to the dean of the law school.

“Tax law is a little bit like a puzzle,” Chris says. “I like the challenge of that, especially in the wills and trusts area.” 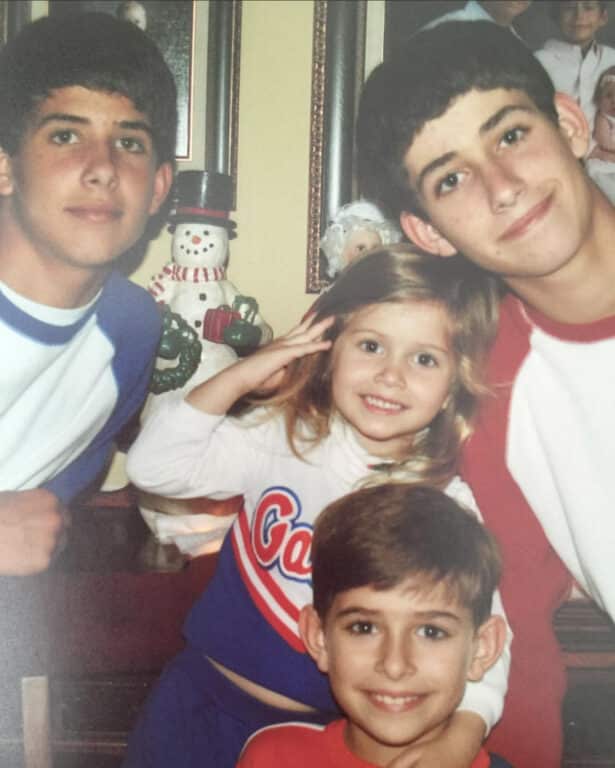 The Boyett children grew up in Miami, but orange and blue were always their favorite colors, thanks to Mom and Dad’s influence. “Whenever we would drive up to Pensacola or when the Gators won a national championship, we would make sure to visit the Gainesville campus,” says Kristine. “That connected the kids with UF from an early age.”

Early on, the Boyetts envisioned their children going to UF. However, they had little idea how much the admissions process had changed until they overheard some neighborhood teenagers talking.

“That really struck us,” adds Chris. “I mean, here we were, Gators, and we didn’t know how much more competitive it had become to get into the University of Florida.”

To boost their children’s odds of acceptance, the Boyetts encouraged them to complement excellent grades with standout extracurricular activities.

“We never took it for granted that just because we were Gators, our kids would automatically get into UF,” says Kristine.

High school valedictorian Chris Boyett Jr. (BA ’16, JD ’19) was active in UF student government and a member of Florida Blue Key, and is now an associate attorney at K&L Gates. High school quarterback Hunter Boyett (BSBA ’18) was grey shirted at UF and is now studying law at Northwestern. The top male academic at his high school, Luke Boyett is currently in his third year at Warrington College of Business, majoring in finance, with “a skill set and passion for sales,” his LinkedIn profile says. 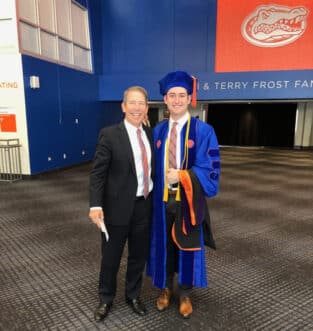 Chris Boyett Jr. (shown here with his father at his graduation from Levin College of Law in 2019) is now an associate attorney at K&L Gates, in Miami. While an undergraduate at UF, Chris Jr. was active in student government and served as a member of Florida Blue Key.

Hoping to follow in her big brothers’ footsteps, 13-year-old Annabelle is supplementing her academics with viola lessons and soccer practice while serving as president of the National Junior Honor Society.

“We already know UF is going to be a Top 5 school when it’s her time to apply,” Kristine says. (See Kristine’s tips on “How to Raise a Future Gator,” below.)

Life has not slowed down for the Boyetts since their three eldest left home; Kristine is still busy being Super Mom, and Chris works 14-hour days at Holland & Knight, advising wealthy families on estate, tax and succession planning.

“Even if you’re wealthy, about 92% of families go from rags to riches to rags in three generations,” says Chris. “You have to plan.”

Sometimes the couple heads to the Keys for some boating and fishing, but more likely than not, they will point the family car in the direction of Gainesville.

Once back on campus, Chris and Kristine like to stop in at Student Affairs, to whose UF Family Fund they generously donate.

“We are so grateful our kids were able to experience student life at UF, and we want today’s students to know UF has their back,” says Kristine.

The Boyetts are also members of the UF Parent and Family Leadership Council and served as its co-chairs in 2017 and 2018. As council members, they work alongside other UF families to improve the university experience for Gators from all walks of life. They are especially supportive of the Machen Florida Opportunity Scholars (MFOS) program, which provides comprehensive scholarships and support for first-generation college students.

We are so grateful our kids were able to experience student life at UF, and we want today’s students to know UF has their back.

The MFOS program did not exist in the ’80s when Kristine was an undergrad. But she knows firsthand how transformational a college education can be.

“Neither of my parents had a college degree, but that was the determining factor in how successful my siblings and I became,” says Kristine. “My sister was a finance major at UF. And my brother [Gator Robert Simon Jr.] went to law school.”

Chris, too, appreciates UF’s affordability, which enabled him to earn three degrees from a top university “without owing a million dollars,” he says.

One memory from his first week of law school sticks in Chris’s mind. Even though the occasion was Dean Jeffrey Lewis’s orientation address to the 1989 crop of new law students, the speaker’s philanthropic message applies to Gators from every college and graduating class, Chris believes:

“One of the things Dean Lewis told us was, ‘Your education is costing you, say, $3,000. But the state of Florida is paying $10,000 to educate you. The difference is coming from the people of the great state of Florida.

‘So when you graduate and go out and practice, you owe them. Give back.’”

To support Student Affairs at the University of Florida, contact Ashley Rodriguez at arodriguez@uff.ufl.edu or (352) 392-8596.
How to Raise a Future Gator
Kristine Boyett has more than 20 years’ experience raising high-achieving children who were accepted at their dream school, UF. None of that was by accident. Here are her tips on helping youngsters differentiate themselves positively from other UF applicants:
Scroll Up
Use your Advancement username (without the @uff.ufl.edu) and password