Karen Bjorndal and her husband, fellow UF biologist Alan Bolten, are two of the world’s leading sea turtle experts. Among their biggest finds was helping to discover the mystery of where “lost” loggerheads go during the first year of their lives.

Karen Bjorndal found her calling on a famed island in the Pacific. But it was her legendary mentor at the University of Florida who shaped her – and helped her solve one of the great mysteries of the deep blue sea.

Iguanas. That’s how it started. The chance to observe their social behaviors in the Galapagos Islands was too enticing for Karen Bjorndal to pass up. She was an undergraduate then at Occidental College in Los Angeles. While classmates headed to Paris and Rome for the music and art, she chose to study abroad in the company of giant tortoises, penguins, blue-footed boobies and sea lions. For six months Bjorndal lived in Charles Darwin’s eastern Pacific playground, three of them alone, watching the thick, spiky land iguanas do what iguanas do.

Which, it turned out, isn’t much.

“Land iguanas don’t do a whole lot, behaviorally, so I had a fair amount of spare time,” she jokes. “I used to go down to the coast and stare out over the ocean. Sea turtles would come out of the water and blow. It intrigued me that this organism — both marine and required to breath air — is really a creature of two worlds. That’s when I decided I really wanted to study sea turtles.”

I feel a tremendous loyalty to the University of Florida. It provided me with a wonderful life from the time I came here as a beginning graduate student. The support and opportunities, both educationally and for personal growth, have been phenomenal.

Not that she hadn’t considered it before. As a young girl in San Francisco, Bjorndal was enchanted by them — their grace and peaceful nature. Wildlife, she knew even then, would be her calling. Whether it was working with turtles or another animal made little difference.

Her decision made during those months in the Galapagos Islands, she returned to L.A. just long enough to graduate, then traveled 2,400 miles east to learn from the world’s foremost sea turtle expert: UF conservationist Archie Carr.

“Archie was the person to work with to study sea turtles,” Bjorndal (Ph.D. ’79) says. “I’m blessed that I had him as my mentor. He was fantastic as a person, and as a scientist you couldn’t do better.”

All these years later, Bjorndal runs the university’s Archie Carr Center for Sea Turtle Research, named in her former professor’s honor. However, she became its director far too soon, she insists. It was Carr (BA’ 32, MS ’34, Ph.D. ’37) — the one-time high school science teacher turned popular zoology professor and nature writer — who was supposed to guide the center, with Bjorndal at his side. That changed in May 1987 when Carr passed away.

“I still think of him almost daily and miss him very much,” Bjorndal says. “I’ve tried throughout my career to keep Archie’s memory alive and to build on his legacy.”

Over and over again.

Carr didn’t want Bjorndal, or any other student, to do a graduate dissertation on sea turtles. Too mysterious and hard to study, he’d argue.

“I hung around for six months, go into his lab to chat, and finally one day he passed me in the hallway, stopped and said, ‘Karen, what do you think about mosquitos?’” she recalls. “It turned out he had a wonderful opportunity for me in The Bahamas on the island of Great Inagua. Which, even in The Bahamas, is well known for being terrible for mosquitos and sandflies.”

… But rich with green sea turtles.

Bjorndal spent 18 months there, and, despite the mosquitos, she’s gone back each of the last 40-some years to continue her work with the greens that swim in Great Inagua’s waters. Of the seven sea turtle species — loggerheads and leatherbacks, Kemp’s ridleys and olive ridleys, hawksbills and flatbacks are the other six — the greens, to her, are special.

“I’ve studied them the most because it’s the only herbivorous one,” she explains. “Sometimes I feel a little guilty because I should like them all the same. But, to me, greens are the most fascinating.”

That’s not to knock the others, Bjorndal quickly adds. All are “tremendous navigators” that crisscross ocean basins and somehow, after wandering for 40 years or more, find their way back to the beaches where they first crawled into the sea decades earlier to dig new nests of their own.

“It’s such a complex story for them,” she says of the turtles. “There are vast threats in all these different habitats, whether on their nesting beaches or in the open ocean.”

I’ve tried throughout my career to keep Archie’s memory alive and to build on his legacy.

Ever so slowly, Bjorndal, associate director Alan Bolten (Ph.D. ’86) and their colleagues at the Carr Center are discovering sea turtle secrets — like where hatchings go their first year. Their disappearance always baffled scientists.

“Throughout his entire career, Archie wondered where very young sea turtles went. We called it the lost year,” Bjorndal says. “Hatchlings by the thousands would disappear when they went into the water and wouldn’t be seen again until they were about the size of a dinner plate, when they came back into coastal waters.”

In his search for clues, Carr combed beaches and harbors on the rim of the Caribbean and Atlantic, asking fishermen and sailors if they’d spotted small sea turtles. A letter from a woman in the Azores, a chain of islands 850 miles from Portugal’s mainland, gave a possible answer. Turtles there were the size of the “missing” loggerheads.

“It was Archie’s idea that Florida loggerheads got caught up in currents and got carried around to the other side of the ocean to the Mid-Atlantic Ridge,” Bjorndal says.

Carr never got to the Azores to test his theory, but Bjorndal and Bolten did.

“To hold a little lost-year loggerhead, that was a wonderful moment,” she says. “After hearing about them for decades and our big search, to finally go to the island of Faial and have somebody hand me one was magical.”

Plight of the Sea Turtle

Bjorndal’s narrow office in campus’ Carr Hall is filled with reminders of the sea turtles she adores. Framed posters and photographs depicting them decorate walls. Books and other literature about them rest on shelves and tabletops. The charm on her necklace is shaped like one.

That she’s been able to make sea turtles her life’s work is “a gift,” Bjorndal says. 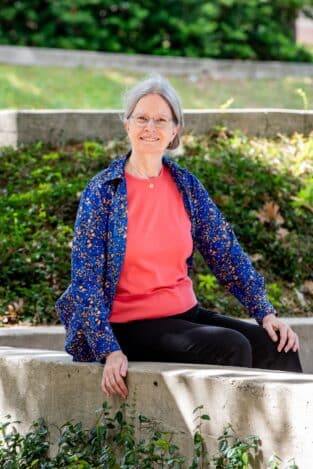 Karen Bjorndal is optimistic about sea turtles’ near future; but long-term, threats like pollution, human encroachment on nesting beaches and a warming planet might cause their extinction.

It’s a gift that keeps giving. Bjorndal and her team’s contributions to conservation and the understanding of sea turtles are wide. Japan, for instance, agreed to ban a century-old trade that used endangered hawksbills’ shells to make polished combs, ornaments and other things. In other countries, like the United States, there’s growing awareness of the dangers the animals face: pollution and warming oceans and fishing nets and seawalls that block nesting beaches. After years of Florida nests falling in numbers, turtles in the state seem to be making a comeback. All, Bjorndal says, are thanks to global cooperation.

“It’s not good enough to get Costa Rica to agree to protect sea turtles,” she explains. “You have to get Panama and Nicaragua and all the other countries to agree. Because even if you can save them in Costa Rica, if they’re being killed elsewhere it’s not a big help.”

That success, Bjorndal says, is a good sign for vulnerable sea turtles — at least for the moment.

“In the short run, I’m optimistic; but in the long-run, I’m very pessimistic,” she admits. “Human population is increasing and a large proportion live along coastlines. Nesting beaches are a relatively small fraction of our globe’s landscape, and that habitat is becoming more limited.”

And that’s just one threat facing a creature that’s been around since dinosaurs roamed. Some die in fishermen’s nets. Rising temperatures are changing ocean currents and heating the sands where nests are dug — warmer eggs, for sea turtles, mean more females and fewer males. (That’s a huge concern; nowadays, 90 percent of Florida’s hatchlings are female.) Streetlights and porch lamps lure hatchlings to roads and houses. Floating plastic bags and balloons are mistaken for jellyfish. Erosion and construction are claiming beaches.

That’s bad news for humans, too. Sea turtles keep marine ecosystems in balance. Without that balance, oceans will become sick and life’s dominos will tumble. 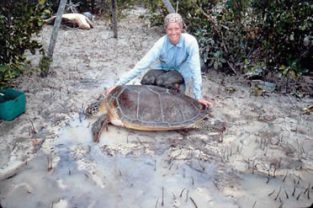 With more than 40 years working with sea turtles, Karen Bjorndal’s favorite of the seven species is the green, the only herbivorous one.

It’s with an eye on that uncertain future that she and Bolten — her husband and fellow biologist — contribute to the university, so that the center’s work will still continue long after they’ve stepped aside. Their gifts are also out of gratitude, Bjorndal says.

“I feel a tremendous loyalty to the University of Florida,” she says. “It provided me with a wonderful life from the time I came here as a beginning graduate student. The support and opportunities, both educationally and for personal growth, have been phenomenal.”

After more than 40 years working with sea turtles, Bjorndal is finally witnessing firsthand their complete birth-to-motherhood circle. In the turtle’s kingdom, it takes that long to become sexually mature and to lay eggs — which means hatchlings Bjorndal worked with as a student are just now becoming first-time parents.

That she’s been able to spend that much time doing what she loves so much is remarkable, Bjorndal says.

“It’s great to watch this whole new pattern of natural history unfold before you. People often ask me, ‘You’re doing the same thing now for 46 years?’” she says.