The Care and Feeding of a Brighter Future

His company’s focus: healthy crops for an increasingly stretched and strained planet. But it’s his generosity that ensures tomorrow’s leaders are ready for the challenge.

In the 1970s and ’80s, when J.J. Grow was a kid in rural Citrus County, the Gators ruled his autumns … and his heart. The rivalries, the glories, the heartbreaks — these are what cemented his love for the University of Florida.

Though it was football that first drew Grow to the university, once it was time to enroll it was the academics.

As a teenager, the rigors and responsibilities of being an officer in Future Farmers of America at the local and state levels taught Grow discipline. At Citrus High School, his grades were good and work ethic better. An FFA scholarship and another from UF’s John F. Smoak Memorial Fund were the final pieces he needed to head to Gainesville.

UF gave me so many opportunities. We want those same opportunities for other students. You can change people’s lives with a push in the right direction.

With those scholarships, Grow (BSA ’92) became the first in his family to graduate from college. That the university he’d admired for so long became his alma mater made the accomplishment even sweeter.

“Being at the University of Florida for my studies opened up the world to me,” Grow says. “Going to UF from a small rural community, I never knew what was out there.”

But as big as he’d discovered the world to be, Grow never wandered far from his roots (agriculture) or his hometown (Inverness). There was no reason to. He’d been raised in farm country — tractors and trucks, 4-H and FFA, sowing and harvesting seasons. He knew crops and he loved the work. So at UF, naturally, Grow studied food and resource economics.

Then he set out to change farming forever.

Humans are tumbling toward a crisis, scientists predict. In 30 years there won’t be enough food to go around. A swelling global population is part of the problem. So are droughts, floods, rising seas and other environmental extremes that are devastating once fertile farmlands.

All of which means the agricultural industry is under big-time pressure. Says Grow: “How do we feed all these people with less land, and in an environmentally responsible way?”

One solution, he says, is to rethink how farmers farm.

That idea led Grow to start Verdesian Life Sciences in 2012. Seven years later, Grow and his company are introducing “precision farming” to America and the rest of the globe, using 21st century science to make crops more sustainable and bountiful.

Verdesian (a play on the Spanish word for “green”) touts “nutrient use efficiency,” with a goal of “maximizing the health of every plant.” Optimum plant performance, Grow says, requires keeping soil healthy, water pure and crops rich with nutrients. That’s where science and Grow’s knack for problem-solving come in. Products and technologies created at Verdesian — all designed to protect the environment — are helping farmers do more on less land.

And as he did on those autumn Saturdays long ago, Verdesian Life Sciences’ chairman still looks to the University of Florida for inspiration. His agribusiness, with its focus on sustainable farming practices, uses research conducted at UF’s Institute for Food and Agriculture.

It’s the practical thing to do, Grow explains. The university is one of the world’s leaders in agricultural sciences. With the world’s population nearing 9 billion, it’s going to take UF’s scientists working together with farmers, businesspeople and consumers to feed everyone.

Daunting as that seems, Grow is optimistic. His confidence is based on the belief that through ingenuity — a good bit of it coming from UF’s scientists and professors — progress will be made.

“I expect a lot of the university,” he says. “But I’ve seen it work. It worked for me.”

J.J. and Jennifer Grow are no strangers to supporting UF. Over the years, the Inverness couple has invested generously in the university — most of it, by far, for Athletics and UF/IFAS. There’s a reason for that, Grow says.

Scholarships put a UF education within reach for the country kid who is now a Bull Gator and life member of the alumni association. It’s with that in mind that the Grows have created four endowed scholarships in UF/IFAS’s College of Agricultural and Life Sciences named after people they admire: UF professors Gary Fairchild, Burl Long and Gene Trotter, and Citrus High agriculture teacher Randall Kegler. 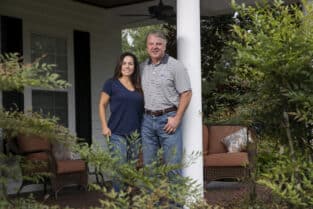 Back when he was in college, Grow respected all his professors in the food and resource economics department. But Fairchild and the late Long and Trotter, in particular, made lasting impressions. They were more than teachers to Grow; they were lifelong mentors.

“I want people to know those gentlemen,” he says. “They were teachers who made a difference. They built relationships with us, which sets the faculty in IFAS apart from others.”

He still values their little lessons not taught in books or lectures: from Trotter, the importance of a hand-written thank you note; from Long, an appreciation for meaningful work; from Fairchild, the practice of providing briefings at the end of meetings. Even now, Grow draws on those lessons in his business.

As someone who worked while attending college full-time, Grow understands the value of a CALS scholarship.

“UF gave me so many opportunities. We want those same opportunities for other students,” Grow says. “You can change people’s lives with a push in the right direction.”

His hope is that the scholarships enable future farmers and agricultural scientists to make their own marks on the industry, especially as the world grapples with how to feed billions of people with less farmland and more extreme conditions.

“I want them to become good citizens who can move the ball forward,” he said of the student scholars. “I know how this sounds, but I want them to make the world a better place.”

A better world has long been a goal for the Grows.

Along with their UF scholarships, the couple is generous in their community. In addition to their church, Our Lady of Fatima, they support Citrus County Blessings in a Backpack, Operation Outdoor Freedom and the national and Florida FFA organizations.

“I give back because I believe those things made me and molded me into the person I am today,” Grow explains. “I give back to those who have given me so much. I hope it inspires others to do the same.”

The recipient of the 2018 CALS Alumni and Friends Award of Distinction for outstanding contributions to the agriculture industry and the university, Grow has also served on several boards and advisory councils, including Crop Life America, Florida FFA Foundation and Florida FFA Alumni. He completed the Wedgworth Leadership Institute and remains an active alumnus of the program. This fall, he’ll join the UF Foundation Board to help guide the university’s fundraising activities. Mentoring students, though, might be Grow’s most lasting legacy. His message to them: study harder and work harder than anyone else.

“Anything is possible through hard work and experience,” Grow says. “Don’t let hard work keep you from being all that you can be.”

Or, he could add, from finding solutions to the world’s greatest challenges.