A Beehive in the Boys’ Club

Jo-Anne Stenger had to wait through the 1960s to fulfill her dream of medical school. She would go on to trail-blaze several firsts for women in surgery.

She was not looking forward to this rotation. Surgeons had a reputation for being loud and arrogant, and she didn’t plan on becoming one. Already she was looking forward to next month when she’d move on to a specialty more up her alley—psychiatry, maybe. Besides, everyone knew surgery was a boys’ club.

Just then a flustered-looking professor in a white coat came hurrying up.

“Who are you?” he demanded.

In as calm a voice as she could muster, she answered.

“Dr. Ray Smith,” he said, nodding in return. “Just had to dismiss my resident — not a good situation — and I’ve got a patient scheduled for surgery this afternoon, head and neck cancer….”

At 28, Stenger was older than the typical UF medical student. That usually worked in her favor during interactions with faculty. So did her habit of always arriving early.

“How’d you like to be my resident for the next month?” he asked.

There were seven women in my class, which was revolutionary. Previously if they took one or two a year, that was considered standard.

That afternoon, Stenger was standing at an operating table, handing instruments to Dr. Smith.

As the surgeon worked, he patiently explained the hows and whys of what he was doing: slicing the larynx, removing tissue. Contrary to her expectations, Stenger was fascinated.

“What I really liked was not so much the destructive part of the procedure, but the putting everything back together again,” says Stenger (BAE 65, MD 74), recalling the “Aha!” moment 46 years later.

During her next weeks as Dr. Smith’s unofficial resident, Stenger became engrossed in the fine points of reconstructing a patient’s face and throat. Taking notice, Dr. Smith advised his protégé to go into plastic surgery.

“It was really he who set me on my path,” remembers Stenger. “If I hadn’t met Ray Smith, I don’t know what I would have ended up being.”

Smith’s advice launched Stenger on a career path marked by historic milestones: She became UF’s first female graduate to pursue a surgical residency and its first to become a surgeon, as well as the first woman resident in plastic surgery at Stanford University.

Now retired after a long, rewarding career in Menlo Park, California, Stenger traces her success to the “incredibly supportive” faculty at the UF College of Medicine.

“When you’re applying to medical school, you keep hearing how competitive and cutthroat it all is,” she recalls, “but at the University of Florida, they just wanted us to become good doctors.”

Like many Floridians, Jo-Anne Stenger’s early life was touched by exotic trade winds. Mother Janet Stenger (née Sozano) was a native of Trinidad; father Glen worked for Pan American World Airlines. During Jo-Anne’s early years, the Stengers lived in Mexico, California, and the West Indies, which opened the young girl’s eyes to the values of diversity and inclusion.

“I spent a lot of time in Trinidad with my grandparents, and I went to first grade there,” she explains. “At that time, it was a British colony and very integrated. That influenced me into being fairly accepting of all kinds of people.” 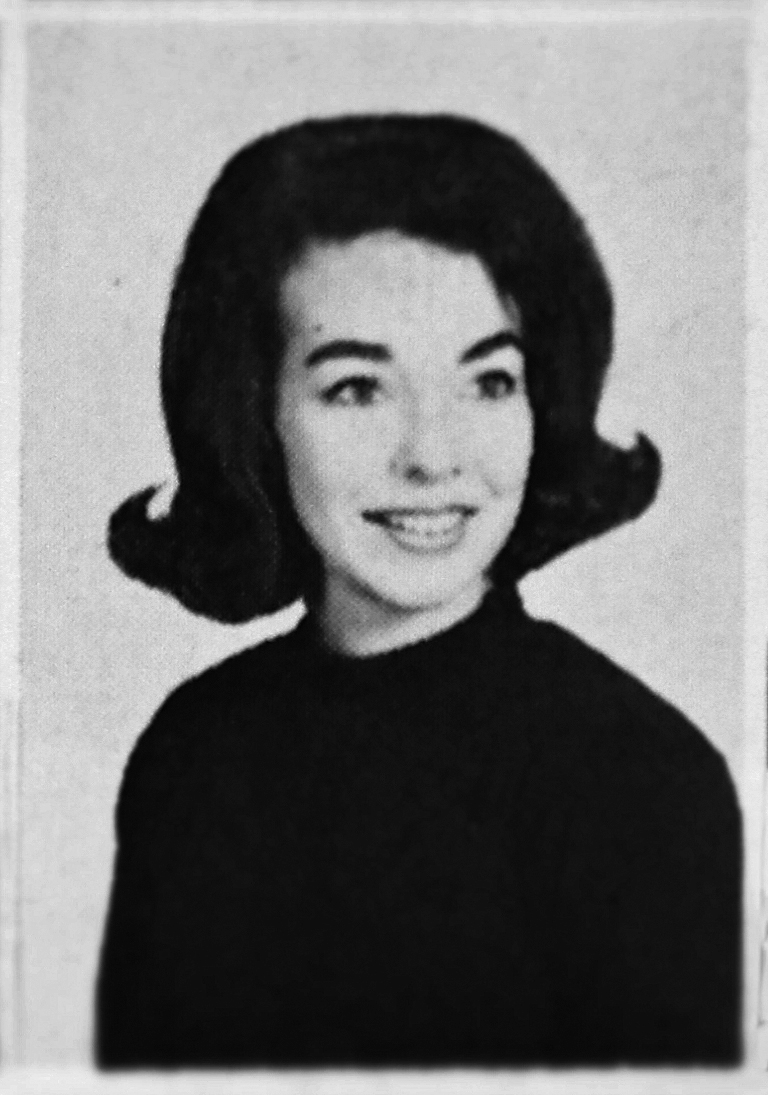 The Stengers settled in Coral Gables when Jo-Anne was in fourth grade and enrolled her in a private Catholic school. Jo-Anne quickly settled into a classic ’50s Miami childhood — learning to swim at Venetian Pool, spending Saturday afternoons at the Miracle Mile movie theater — and she threw herself into athletics: volleyball, basketball, and softball. Always cheering her on was dad Glen.

“I had this fabulous father growing up,” says Jo-Anne. “I never felt like, because I was a girl, there was something I couldn’t do.”

“Even if my team lost, he always made me feel like I could win,” she adds.

In 10th grade, Jo-Anne transferred to Gables High School, where she had her first “real” science class.

“I fell in love with biology, which I equated to being a doctor,” she says.

From then on, Jo-Anne set her sights on a medical career.

From Bobby Pins to Bob Dylan

The University of Florida that Jo-Anne Stenger entered as an undergraduate in 1961 was a world apart from today’s institution. The campus had only gone coed 14 years before, and men outnumbered women more than 2 to 1. Majors fell into strict masculine/feminine categories, and so did dress codes: pants for men, dresses or skirts for women. And that included game day at Florida Field, as the stadium was then known. 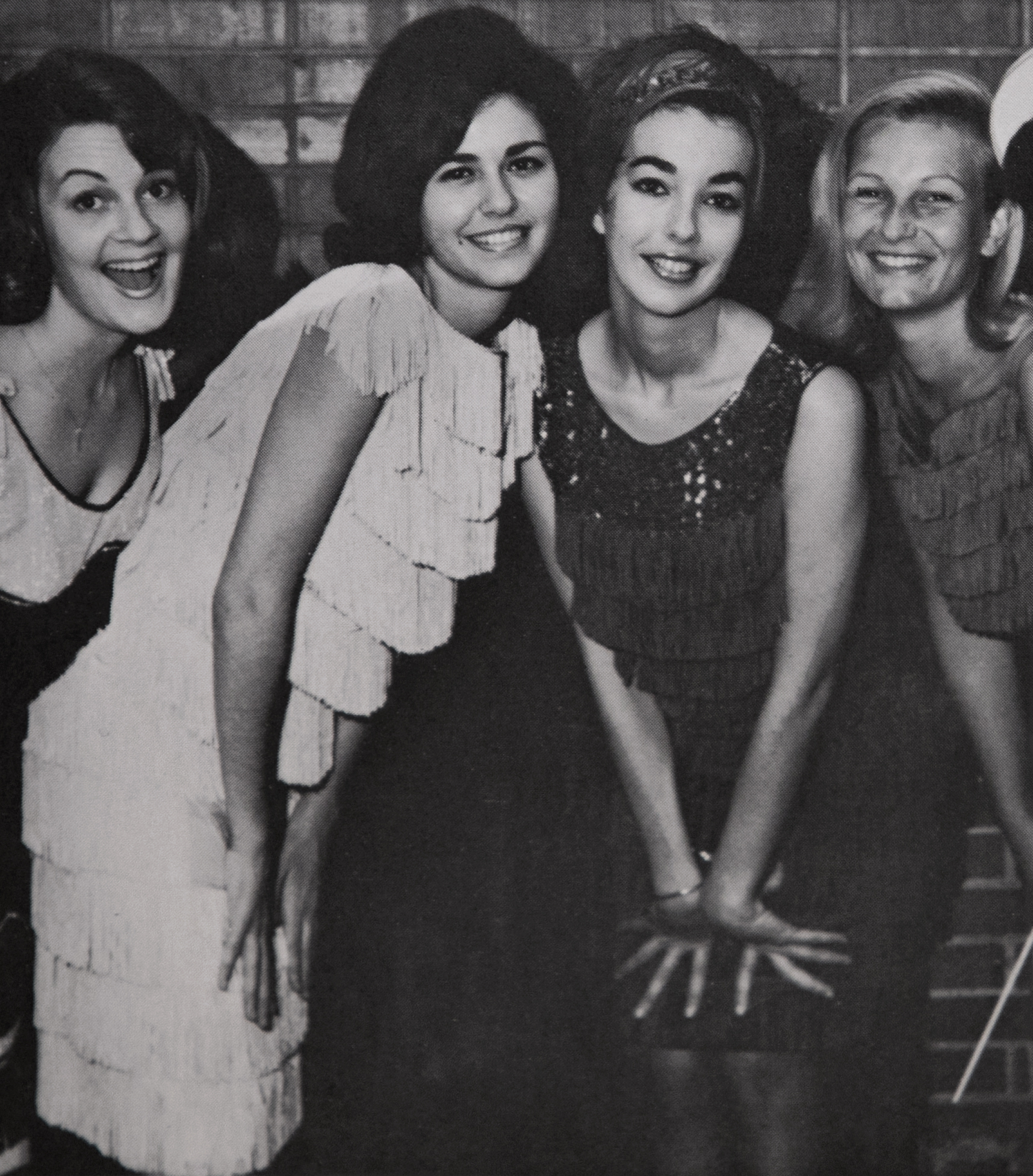 Above all, women at Florida Field had to have the perfect “do.” That’s when Stenger leaped to the aid of her sorority sisters, pinning up stylish beehives with 100 bobby pins and loads of hair spray. Tri-Delt sister Jo-Ann Notaris (BA 65, MA 68) recalls: “A hurricane couldn’t have moved a hair on my head!”

That meticulousness would soon prove a Stenger hallmark.

“We were lab partners in biology class, having a good time dissecting frogs together,” recalls Notaris. “She later applied that same skill to plastic surgery.”

Stenger turned heads as a look-alike for actress Loretta Young, dancing with admirers at frat parties and modeling for the Florida department store Burdines in the summer. But her plans to become a doctor met with a less receptive audience. In Stenger’s junior year, she switched career paths from pre-med to education.

“Everyone sort of talked me out of medicine because women weren’t going to medical school then,” she admits.

Statistics from the Association of American Medical Colleges bear that out: During the 1960s, women never made up more than 6 percent of any medical school class in the United States.

Ever pragmatic, Stenger kept her science major and graduated from UF in ’65 with a Bachelor of Arts in Education. For several years she taught science to high school students in Miami and then earned a master’s in biology at the University of Miami, thanks to a grant from the National Science Foundation.

Inspired by her success in graduate school, Stenger decided to pursue her high school dream and applied to the UF College of Medicine. To her surprise, she was quickly accepted. As Bob Dylan sang, “the times, they are a changing.’”

The early 1970s saw more women applying to U.S. medical schools, encouraged by new laws, changing demographics, and the rise of the women’s movement. The same shift was happening at the UF College of Medicine, whose incoming Class of 1974, of which Jo-Anne Stenger was a member, included more female students than the college had ever seen.

“There were seven women in my class, which was revolutionary,” remembers Stenger. “Previously if they took one or two a year, that was considered standard.” 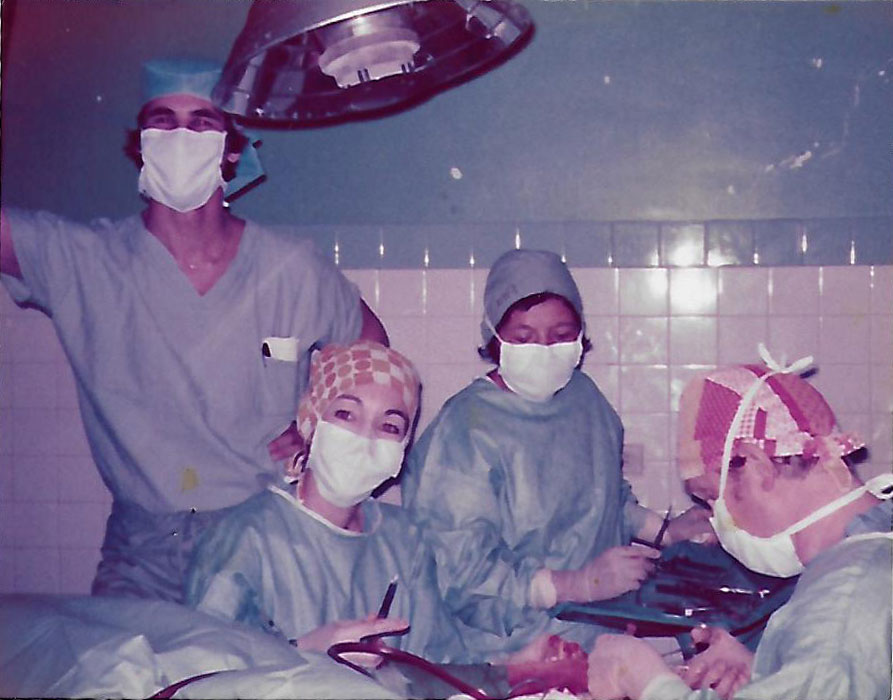 Also new at the College of Medicine was a revised curriculum. Professors were fired up to create a new generation of doctors, and students felt empowered to pursue their dreams, wherever that might take them.

In Stenger’s case, UF was missing both a dermatology department and a chief plastic surgeon when she was ready to specialize. Helpful professors arranged a month of study with dermatologists at New York University. Stenger also was taken under the wing of local plastic surgeon Dr. Leonard Furlow, a newly retired UF faculty member who let the ambitious student accompany him on private-practice rounds.

“I spent a couple of months going to the ER and being in the operating room with him,” she said. “I got a good taste of what the specialty was like.”

On the recommendation of Dr. M. J. “Josh” Jurkiewicz, former chief of plastic surgery at UF and the Veterans Affairs Medical Center in Gainesville, Stenger successfully applied to become a resident in plastic surgery at Stanford University. She was the first woman to be accepted.

Stenger spent six years at Stanford, honing her skills and adjusting to the long, demanding hours required of surgeons. That led to private practice at the nearby Menlo Medical Clinic, where for 25 years she tended her own patients while teaching Stanford residents.

Sixteen years into her tenure, Stenger became the clinic’s chief operating officer. HMOs were just starting up then, and for Stenger, mastering the intricacies of this new cost-saving system was like doing “a quick MBA course.”

Throughout her career, the Gator alum-turned-plastic-surgeon watched with keen interest as more women entered the profession. The percentage of women in general surgery rose from 3.6 percent in 1980 to 19.3 percent in 2015, and by 2016, about 15 percent of board-certified plastic surgeons were women, according to figures from the American Society of Plastic Surgeons.

Still, 15 percent is not a big percentage, especially given that the overwhelming majority – 94 percent – of plastic surgery patients are women. Stenger attributes the gender gap to the daunting challenges surgeons face balancing an intense work schedule with family life.

“It’s becoming more women-friendly as far as being able to integrate a family into a surgical career,” says Stenger, who retired from medicine about 20 year ago and never married. “But in the past, it really was hard.”

Whether working or retired, Stenger has always found time for friends, especially her Tri-Delt sisters. 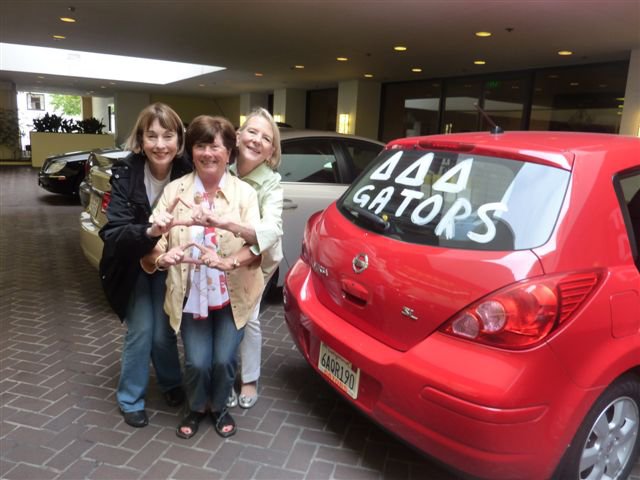 Stenger is especially close to a group of her Tri-Delta sisters from UF who resettled on the West Coast. Bonds forged in the days of beehive hairdos and 10:30 p.m. curfews have only strengthened with time, and the four of them recently returned to Florida to celebrate their 56th reunion in Micanopy.

In addition, Stenger has volunteered for various causes: animal rescue, voter registration, and providing free reconstructive surgery for needy patients abroad. For eight years, she tutored local children from low-income, non-English-speaking families, several of whom have since entered college.

“It’s really excited to see them move on,” she says.

Stenger also is passionate about helping students at her alma mater. Several years ago she established the Jo-Anne Sarah Stenger, MD, Scholarship fund. Her generous bequest will fund the College of Medicine’s first merit scholarship, to be awarded to high-achieving medical students.

“When I went to medical school, in the ’70s, it was really very inexpensive,” she says. “I graduated with, like, $6,000 in debt, which is probably what you’d accrue in the first month now.”

Stenger may have had to bide her time in the 1960s, but the last 50 years have given her ample opportunity to stretch her wings professionally and soar. It only took talent, persistence, and a little help from her Gator family.

And, of course, serendipity.

“I came along at the right time in many things,” she says. “I’ve been very, very fortunate.” 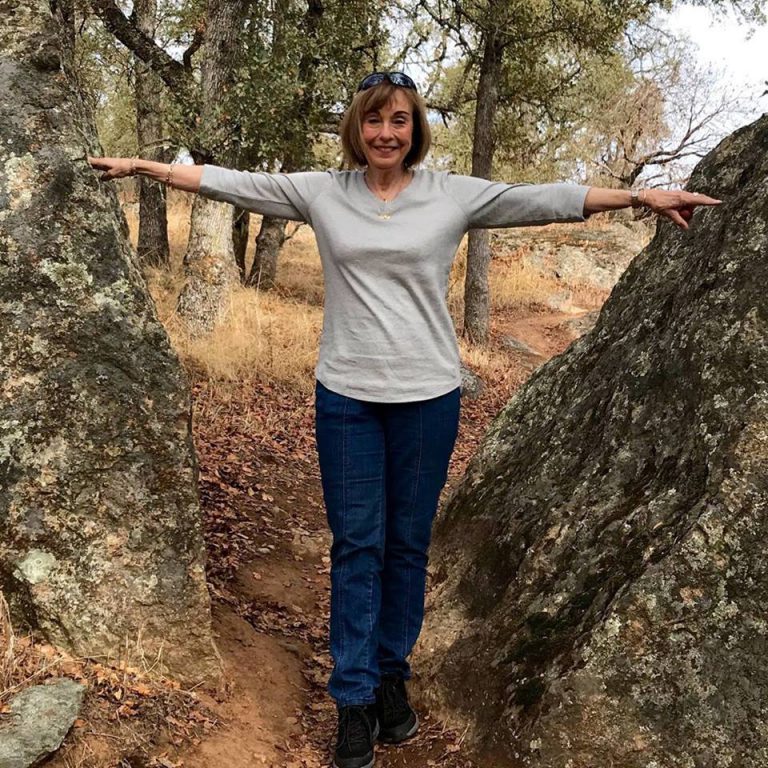