Just as football first brought Rick Staab into the Gator Nation’s fold, he shares a love for the orange and blue with wife Michelle and their children (from left) Luke, Samantha and Tyler.

Rick Staab didn’t set out to make Gainesville his home but now he, the community and its university are inseparable.

It started with football, the Spurrier era — the gunslinger coach and his ferocious, glorious Gators. A Gainesville newcomer in 1990, that’s what hooked Rick Staab on the University of Florida.

But it’s not why he’s a Gator.

Staab is a Gator for the best reason of all. Hope. Hope for his son and hope for his daughter.

Both have dystonia. It’s an especially cruel condition that causes muscles to spasm and cramp and twist. Lockjaw is common. Garbles and grunts replace words. Simple things — holding a fork, writing a note, tying a shoelace — are grueling. A once-strong gait deteriorates into a hobble.

Cures and treatments are going to come from this place before they come from anywhere else. We can move mountains. As I learn more about the University of Florida, it’s a beacon for that kind of stuff.

— Rick Staab, founder of Tyler’s Hope for a Dystonia Cure —

Dystonia’s earliest signs are subtle: an occasional stammer … an easy-to-ignore tick … an unexpected tremor … an out-of-nowhere stumble. Time makes it worse. A pesky elbow wobble at basketball practice in 2005 — their son just a second-grader then — gave the Staabs a clue that something was wrong. Within months, 7-year-old Tyler Staab was diagnosed with dystonia. Later, so was his little sister, Samantha.

Seemingly overnight, two of the three Staab children were in wheelchairs — Tyler reliant on a feeding tube, too, because chewing and swallowing had become unmanageable. (Luke, the Staabs’ youngest, has so far been spared the disorder.)

“When my child was diagnosed that’s all I could think about,” Staab says. “I didn’t know what to do but I knew we had to do something. When it’s your son, your first born, and then your daughter, it’s not a choice. Are you going to sit there and be scared but not do anything?”

What he and wife Michelle did was create Tyler’s Hope for a Dystonia Cure to raise awareness and collect research money. Then they turned to UF Health to help find that cure.

The University of Florida, Staab admits, came as a surprise. North Carolina, New York, Massachusetts — those are the places he and Michelle believed would provide the best chances for their children to beat dystonia. Not Gainesville.

The cross-country search for doctors who could treat their son (and later daughter) kept bringing them back to the University of Florida. A meeting with UF neurologist Dr. Michael Okun convinced them that UF Health was the place to be.

“We spent months taking Tyler to some of the best neurological diagnosis and treatment centers in America, but we couldn’t get a definitive diagnosis,” explains Staab, president and CEO of the Alachua-based medical technologies provider InterMed Group.

“Within five or 10 minutes of Dr. Okun seeing Tyler he said, ‘I think I know what this is.’ Sure enough, he was absolutely right,” Staab says. “His compassion and care and knowledge made me look here. These are world-renowned physicians at UF. If you compare health care workers to athletes, Dr. Okun is the Michael Jordan of dystonia.”

One of the missions for Tyler’s Hope is to bring together medical experts to find a cure for dystonia. Pictured here with Rick, Michelle and Tyler Staab are some of the professionals who took part in a 2016 think tank. (Photo courtesy of Rick Staab)

In 2008 — three years after Tyler’s uncontrollable elbow quiver at basketball practice — the foundation that bears his name teamed up with the university’s Center for Movement Disorders and Neurorestoration (now the Norman Fixel Institute for Neurological Diseases) to treat and cure an affliction that haunts 250,000 Americans. To make that happen, Staab and Tyler’s Hope have raised millions of dollars with no end in sight.

“It’s like the Manhattan Project,” Staab says of UF Health’s determination to fight dystonia. “You bring the most talented people in the world together, lock them in a room, and tell them they can’t come out until they find a cure.”

In the years that have followed, UF’s doctors have seen more than 1,200 patients with dystonia and done some 250 brain surgeries to implant electrodes, used for deep brain stimulation to relax muscle contractions. University researchers have also inched ever closer to that cure.

Okun, executive director of the Fixel Institute, credits Staab for providing “the fuel to be successful on our journey.”

“Once Rick learned that Tyler had DTY-1 dystonia and that it was a small deletion of the DNA on chromosome 9, he transformed into a man on mission,” Okun says. “From that moment forward he has been dedicated to raising money to support research and care in dystonia. He is determined to inspire and fund the cure.”

UF, Staab believes, is where that cure will be discovered.

“We have the dream team of scientists,” he insists. “I’m confident that a cure is going to happen. It’s a matter of time and money — the more we have for the research the less time it takes to get to the end. We just haven’t done enough to put those things together. But I know the cure is out there.”

Tyler and Samantha, meanwhile, are learning to live with the condition. Now adults, both are moving forward with dreams that aren’t defined by dystonia. Tyler is working to be a videographer and photographer. Samantha wants to be a nurse.

There’s an urgency in Staab. Not just to cure dystonia, but for all things in his adopted university and community. So he’s giving his time and energy the only way he knows how: full throttle.

“It’s a waste of time if we’re not trying to have an impact,” he explains. “There’s not enough hours in the day to do what I want to do. I’d be ashamed if I didn’t take every moment that I could to have a deeper impact for my kids and everybody else going forward.” 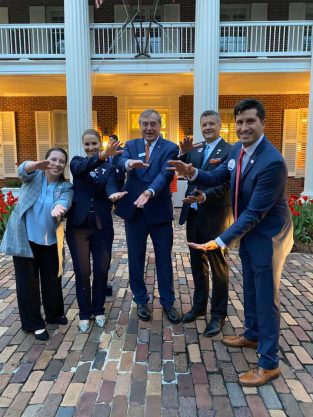 Rick Staab (second from right) is a strong advocate for UF. In 2020, he joined President Kent Fuchs (center) and other Gators in Tallahassee to meet with Florida’s lawmakers. (Photo courtesy of Rick Staab)

So Staab does what he can when he can — then does more. At the university, he’s been on the UF Foundation’s executive and national boards and chaired the board for the UFMDC (now the Fixel Institute). Outside UF, he’s been involved with Santa Fe College’s biomedical and nuclear medicine programs, the Sebastian Ferrero Foundation, LifeSouth Community Blood Centers, Gainesville Chamber of Commerce, Alachua County Education Compact, BBVA Bank and Gainesville Jaycees.

This spring when COVID-19 forced hospitals to scramble for ventilators, Staab made it his mission to deliver them. He reconfigured his company’s manufacturing priorities, and in the pandemic’s first month distributed more than 500 ventilators across the nation. In the pandemic’s first week — even before PPE shortages became a widespread concern — Staab started giving hundreds of masks to UF’s doctors and nurses, and several times delivered lunch to them, too.

“I want to have an impact,” he says. “Not just a small impact — something big. I want to do things that are going to push us forward. You have to do bigger things and work harder than everyone else to do that.”

The University of Florida, Staab says, is the perfect place to make that impact.

“We have all the momentum and we need to keep it going. All these things people talk about, we’re doing. I feel like I have to be a part of that,” he says. “Cures and treatments are going to come from this place before they come from anywhere else. We can move mountains. As I learn more about the University of Florida, it’s a beacon for that kind of stuff.”

It’s pure chance — or maybe fate — that Staab and UF discovered each other. Gainesville was going to be a stopover to see his parents on the road to a job in Pompano Beach, following his 1990 graduation from Hampden-Sydney College in Virginia. Dr. Edward Staab, his father, was a UF radiology professor at the time. The job, though, fell through. So Staab remained in Gainesville to become an entrepreneur.

As years passed, he and UF grew close.

“It’s never disappointed me since I became part of the UF family 30 years ago,” Staab says. “It’s always been a great university, but it’s also always improving. Every year is another opportunity to confirm my firm belief that this is the best community and university there is.”