What’s orange and blue and red? The presidential hopefuls and other politicians who have made a stop at the University of Florida. See photos of their visits.

As we come off the 2020 election year, it’s worthwhile reflecting on some of the many politicians who passed through the University of Florida, whether chasing a degree or pontificating at the podium.

In the second half of the 20th century, UF hosted a string of politicians who addressed students about the major issues of the day. Many came at the invitation of Florida Blue Key as keynote speakers for the Homecoming Banquet. Others arrived as Accent speakers. A few simply came to campaign.

Among the memorable campaigners was Vice President Richard Nixon, who came in January 1960 to drum up support for his presidential bid. Oddly, the candidate who went on to defeat Nixon in the 1960 election, then-Sen. John F. Kennedy, had been a Blue Key speaker three years before. Other guest speakers for whom the Blue Key Banquet proved a steppingstone to the White House include Vice President/President Lyndon B. Johnson and Vice President/President George H. W. Bush.

Washington outsiders may perennially claim the need to “drain the Swamp,” but these politicos knew the path to power often meant packing them in at the Blue Key Banquet and the Union Lawn, if not the Swamp itself. 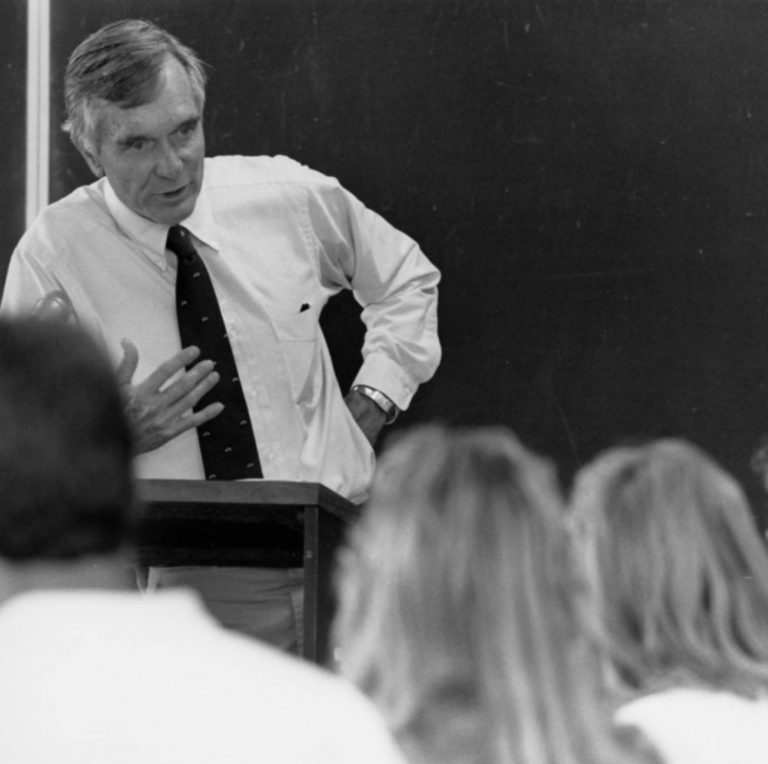 After serving three terms in the U.S. Senate, Lawton Chiles returned to his alma mater to teach political science before clinching the Florida governorship in 1990 and 1994. As of 2021, his victories remain the last by a Democratic candidate in a Florida gubernatorial election. 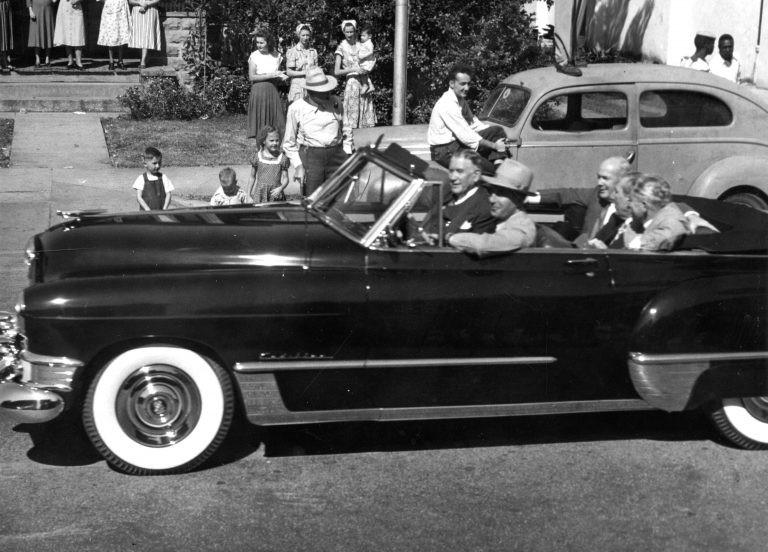 Kentucky-born Vice President Alben W. Barkley (who served with Harry Truman) gave a dedication speech for the opening of Florida Gym, as part of UF Homecoming in 1949. He is shown here, in the front passenger seat, riding alongside leaders in the Homecoming Parade. Driving the Cadillac is alumnus Gov. Fuller Warren (’28), one of the early members of Florida Blue Key. In the rear seat, passenger side, is UF President J. Hillis Miller. Seated next to him is Sen. Claude Pepper. The third person cannot be identified. 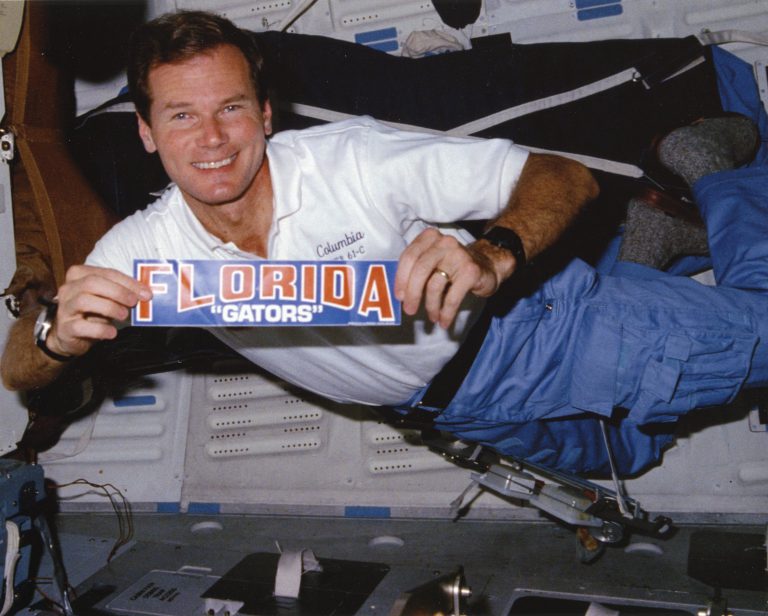 As a payload specialist on the Columbia space shuttle in 1986, then-U.S. Congressman Bill Nelson proudly displayed his Gator spirit, becoming the first member of the House to travel into space. While attending UF in the 1960s, Nelson was a member of Florida Blue Key and Beta Theta Pi fraternity. Nelson’s political career encompassed two terms as a U.S. senator, from 2001 to 2019, filling a seat that had been vacated by a fellow Gator, Connie Mack III. 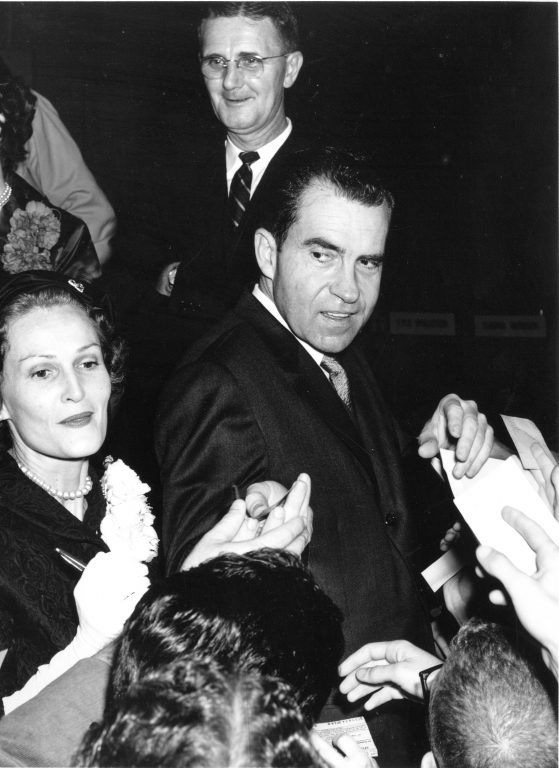 While campaigning for president in 1960, then-Vice President Richard Nixon came with his wife, Pat, to campus. This photo shows the Nixons signing autographs for an eager crowd of students. Standing in the background is UF President J. Wayne Reitz. 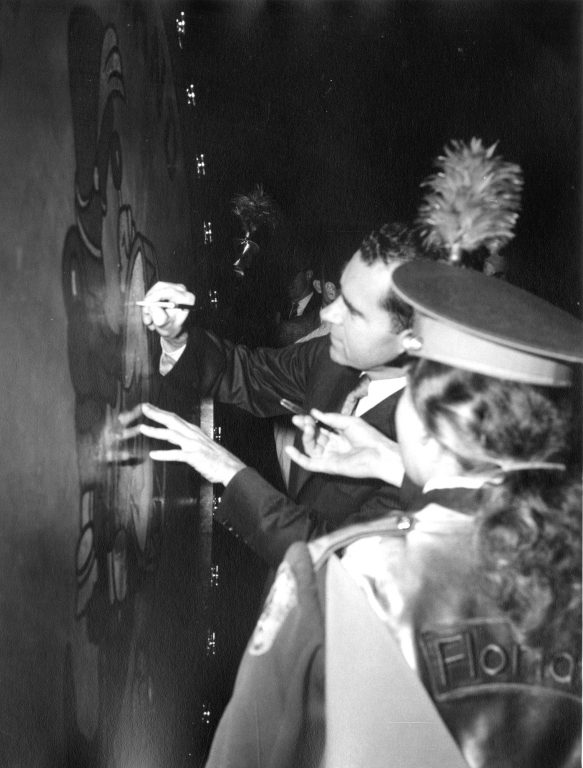 Vice President Richard Nixon maintained a hectic campaign schedule in 1960; his outreach to UF students may have helped him carry the state of Florida that November, despite losing the overall race. Here, Nixon signs the UF Marching Band’s big drum. 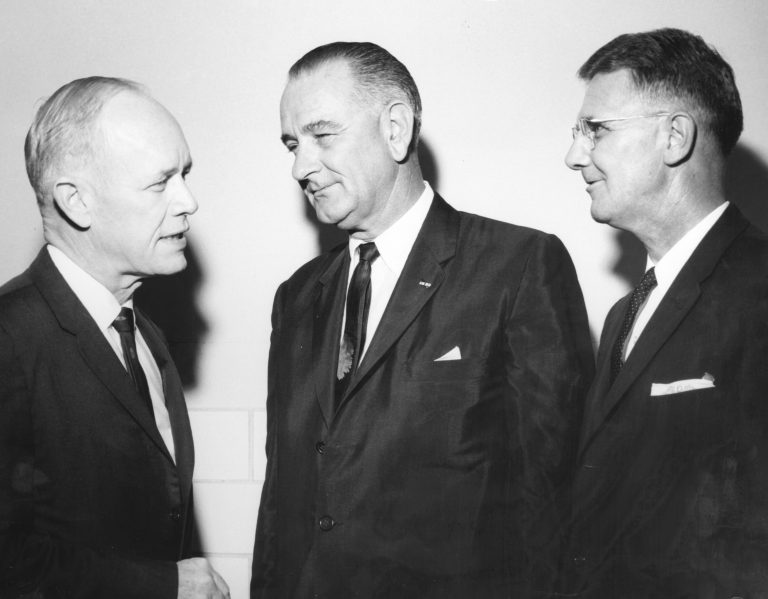 A highlight of each year’s Homecoming is the Florida Blue Key Banquet, which features a prominent guest speaker. Giving the keynote address for the 1961 banquet was Vice President Lyndon B. Johnson, shown here flanked by Gov. C. Farris Bryant (BA ’35) and UF President J. Wayne Reitz; all three sport the narrow neckties popular at the time. 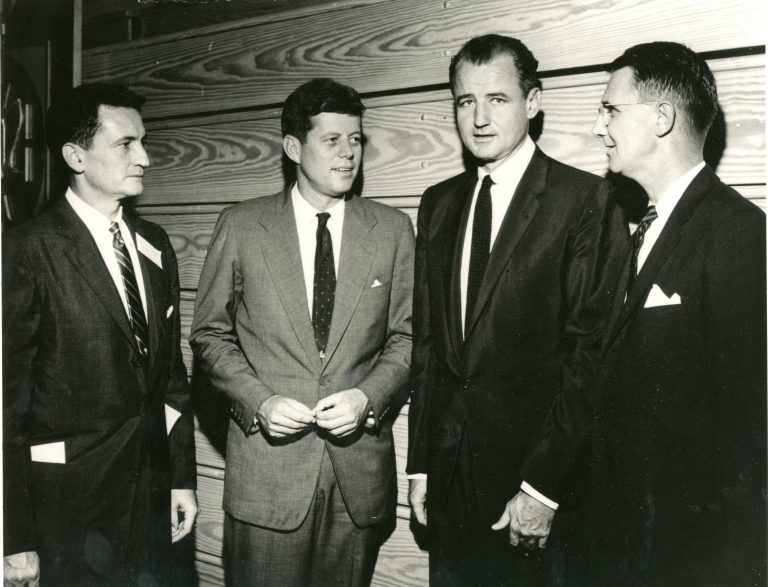 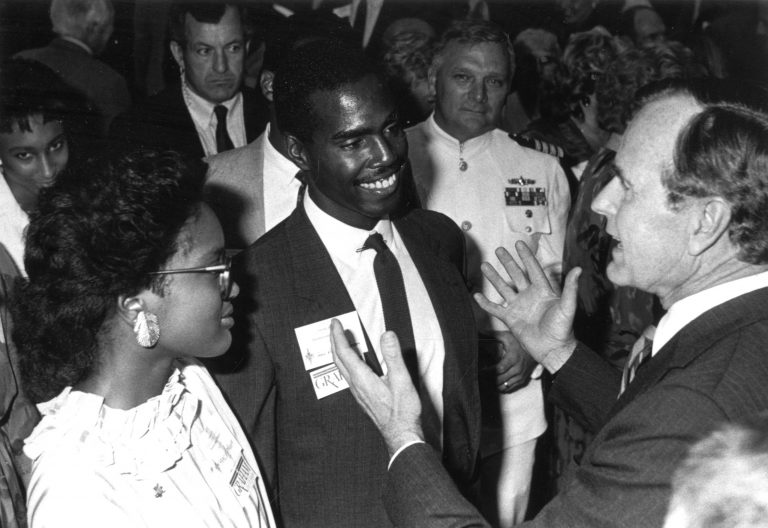 For decades, the Homecoming Banquet was a must-attend for Florida politicians, as well as national leaders. The 1986 banquet was no exception. In this photo, then-Vice President George H. W. Bush mingles with members of the crowd, two of whom wear stickers declaring their support for Gator Bob Graham, who was running for his first term as U.S. senator. Bush’s son, Jeb, would be appointed Florida’s secretary of commerce the following year, and Bush would be sworn in as America’s 41st president in January 1989. 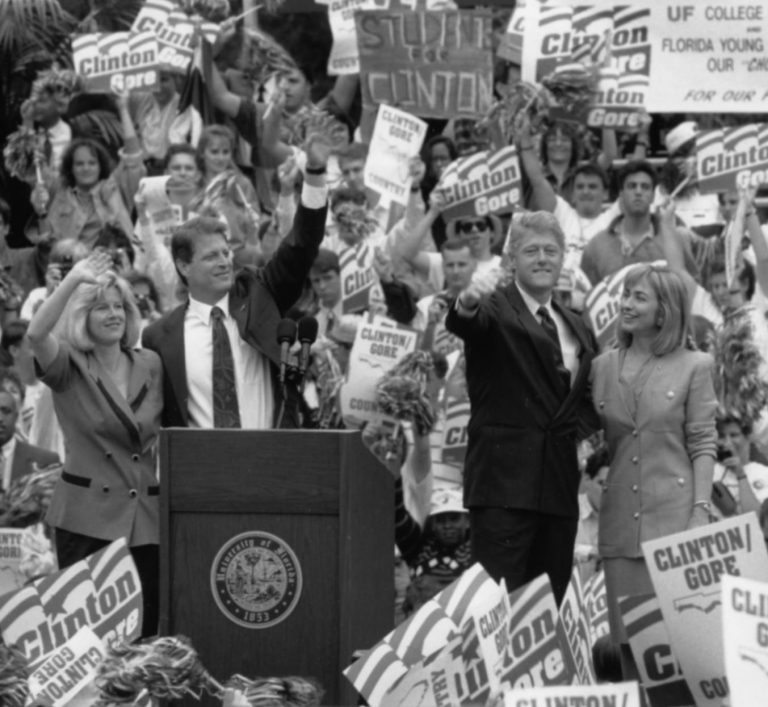 Presidential hopeful Bill Clinton capped a two-day Florida bus tour by holding an election rally on UF’s Union Lawn five weeks before the election. Nearly 20,000 students attended the Oct. 9, 1992, event, according to a UF spokesperson. “You know, Bush and Quayle are kind of taking Florida for granted,” future Vice President Al Gore said to the crowd. “I think you may have a surprise in for them.” From left to right: Tipper Gore, Al Gore, Bill Clinton and Hillary Clinton. 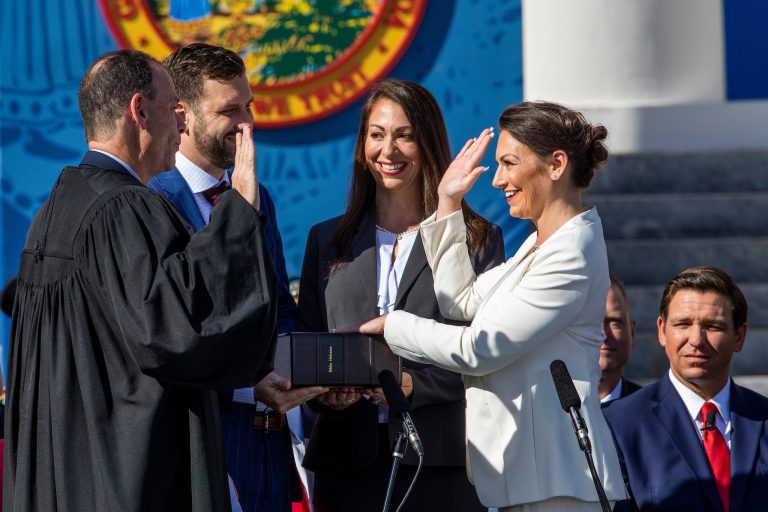 Nikki Fried (BA ’98, MA ’03, JD ’03) made history two years ago when she became the first woman elected as Florida’s commissioner of agriculture and consumer services. For her swearing-in ceremony on Jan. 8, 2019, Fried asked to borrow a copy of the first Hebrew Bible published in the United States from UF’s Price Library of Judaica. Photo by Colin Hackley. 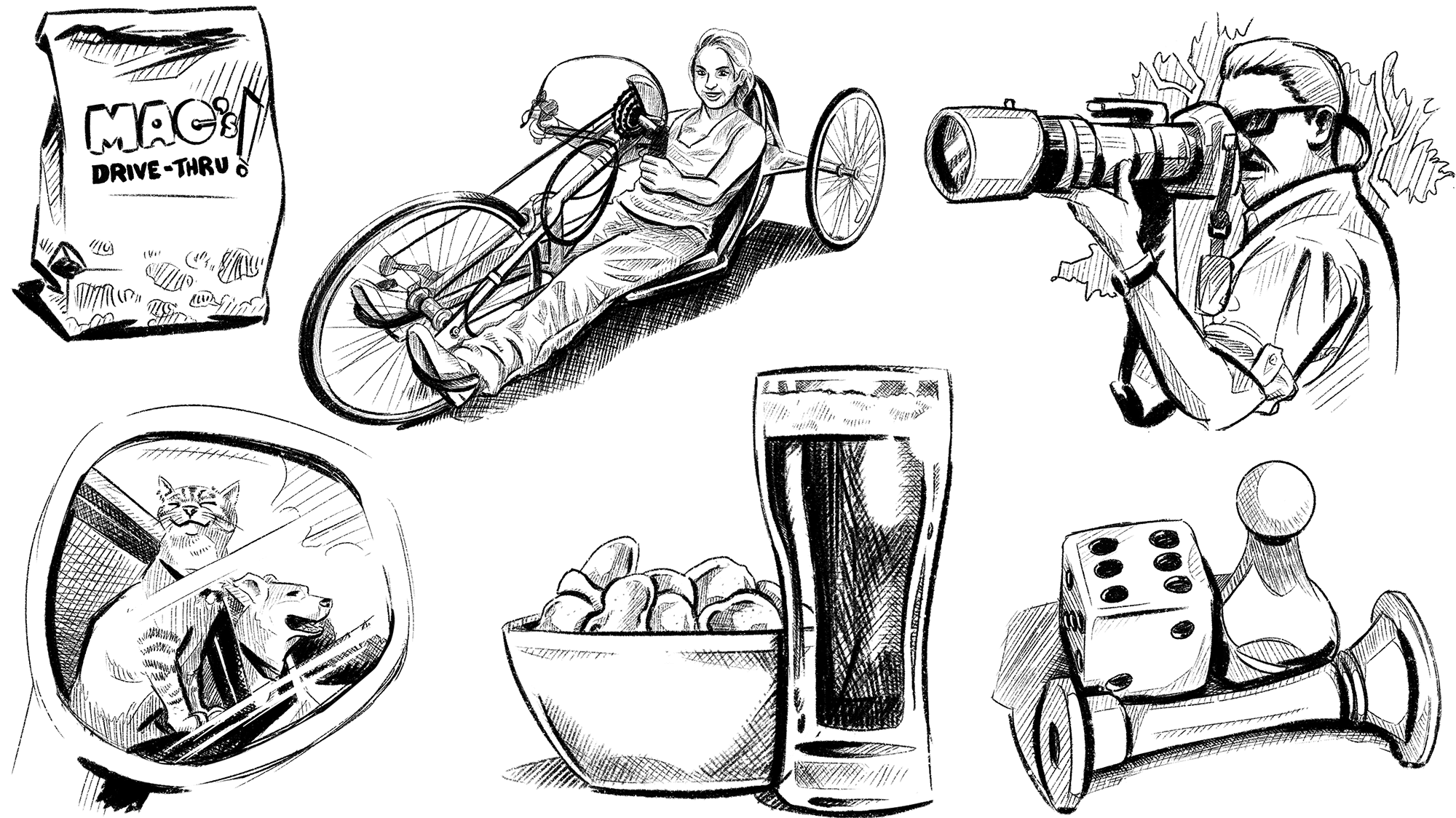 It’s the Little Things that Count 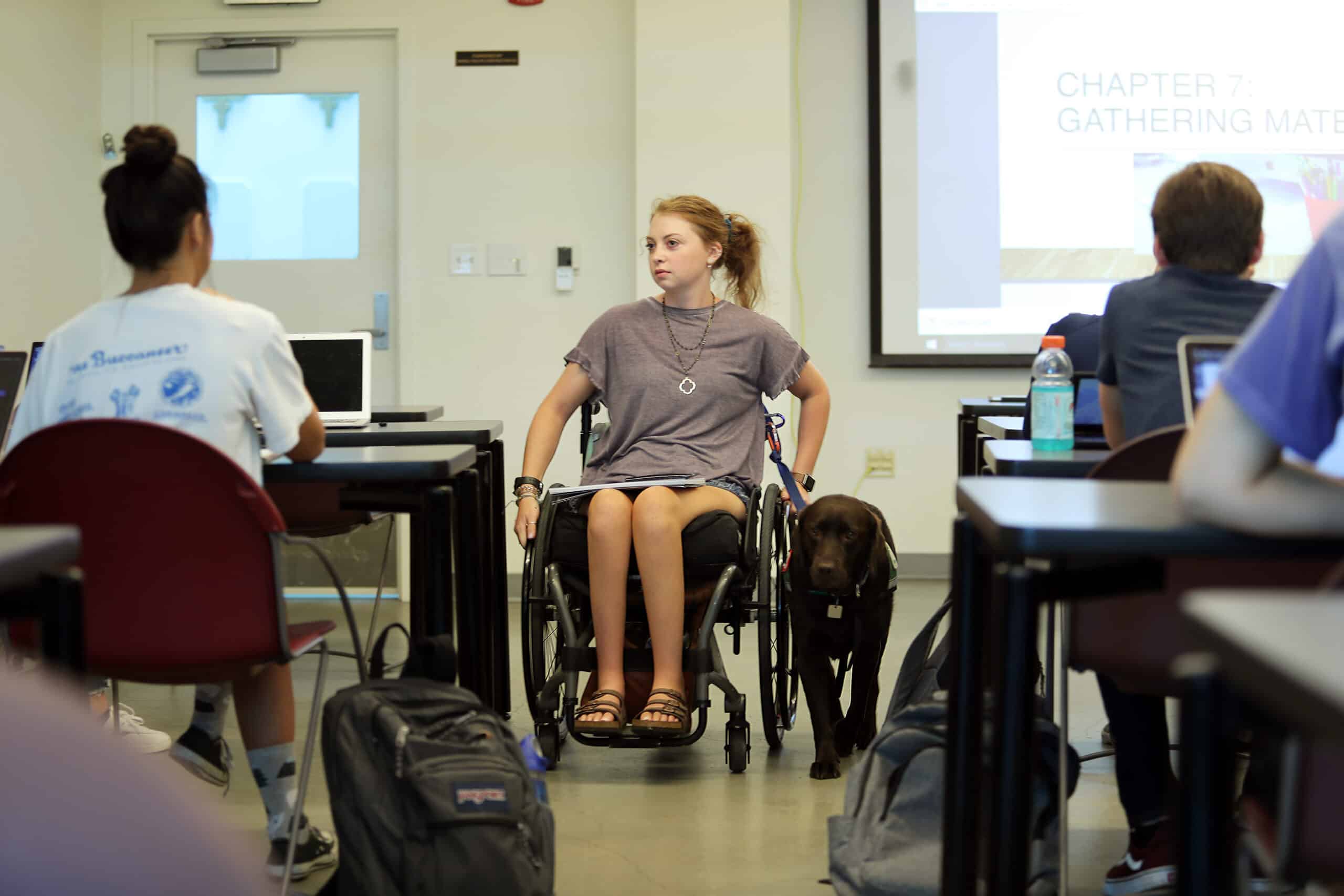 The Incredible Journey of Mariel White